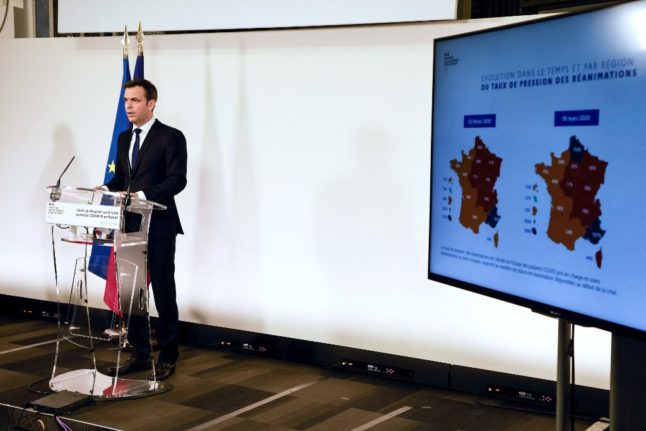 Denmark, Iceland and Norway suspended AstraZeneca vaccinations and Italy halted a batch of the jabs, but Olivier Véran said France’s medicines agency had advised him against similar action.

It had urged him to follow the EU drug regulator’s ruling that AstraZeneca was still safe to use.

“There is no need to suspend AstraZeneca,” Véran said during the regular Thursday health briefing, adding that just 30 people had developed blood clots out of 5 million people in Europe given the AstraZeneca injection.

“The upside of vaccinations at this stage outweighs the risks.”

France is scrambling to boost its vaccination rollout in the hope of avoiding a third lockdown.

Veran said the daily average of new infections appeared stable for France as a whole, but added the figure hid huge regional disparities.

The greater Paris Île-de-France region, the northern region of Hauts-de’France and the southern Provence-Alpes-Côte d’Azur were the main hotspots, he said.

Daily numbers of admissions into intensive care in the Paris region were now so high that hospital capacity is under severe pressure, with non-essential operations cancelled.

More than 1,000 patients are now in intensive care in the region, a number that could reach 1,500 by the end of March – a “critical level” – and very close to the worst numbers seen during the second wave of Covid, Véran said.

Authorities were therefore preparing to evacuate “dozens or even hundreds” of intensive care patients away from the capital and its suburbs to other regions.

Nationwide there were now more than 4,000 people in intensive care, up from 3,555 at the start of the month.

“The situation is tense and worrying,” Veran said. “We do not know when the worst will be over, or how bad it will get.”

The fire service and the army are also being drafted in larger numbers to help following a call from Prime Minister Jean Castex for “national mobilisation”.

France lags behind major European neighbours for shots administered due to a shortage of doses amid complaints about bureaucracy, although Wednesday saw a new record with 286,000 people injected, added Véran.

Foreign Minister Jean-Yves Le Drian had come into contact with an infected person, his ministry announced, meaning he would self-isolate for the next week.

He met counterparts from Germany, Egypt and Jordan on Thursday and held talks with US climate change emissary John Kerry on Wednesday.