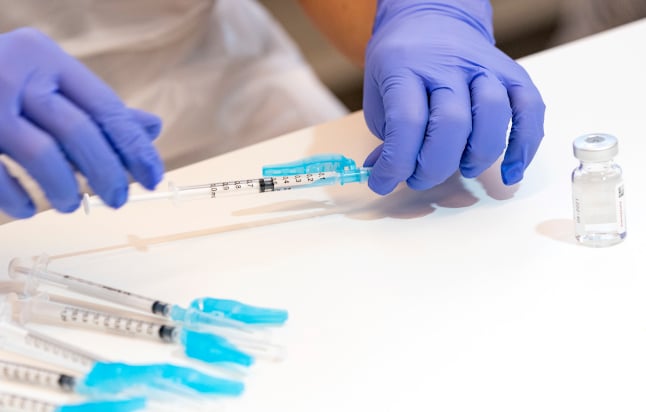 The Swedish Medical Products Agency said available data did not show a link between blood clots and the AstraZeneca vaccine. Photo: Johan Nilsson/TT

But it cautiously added that “it has not been determined, at the time being, that there is a link between the vaccine and the blood clots”.

Nevertheless the agency asked the regional authorities in charge of vaccine rollout to stop using the AstraZeneca jab until further notice.

It added that there was “good evidence the vaccine is both safe and effective” but that it would consult with the Danish medicines agency in two weeks.

The Swedish Medical Products Agency, on the other hand, said it would not suspend vaccinations.

“The Medical Products Agency does not consider that there is sufficient support to discontinue vaccination with AstraZeneca’s vaccine. The European Medicines Agency EMA has also found no reason to withdraw or suspend vaccinations,” it said in a statement.

“The assessment is that the benefits of the vaccine clearly outweigh the risks. The authorities continue to monitor the issue.”

It argued that available data did not indicate that there was a higher number of blood clots among vaccinated people than in the general population, saying that by March 9th 22 such cases had been reported among 3 million people who had received the AstraZeneca vaccine in Europe.

“The Medical Products Agency has received information about two cases of suspected thromboembolic events among people vaccinated with AstraZeneca’s vaccine, around ten for the Comirnaty vaccine and no cases for the Moderna vaccine,” it said.

Authorities in Austria, as well as Estonia, Latvia, Lithuania and Luxembourg earlier this week stopped vaccinations with a batch of AstraZeneca’s vaccine, after a nurse died and another became seriously ill after receiving their jabs.

She died as a result of severe coagulation disorders, an illness related to the blood’s ability to clot. But EMA said on Wednesday that a preliminary probe showed that the batch of AstraZeneca vaccines used in Austria was not to blame for the death of a nurse.