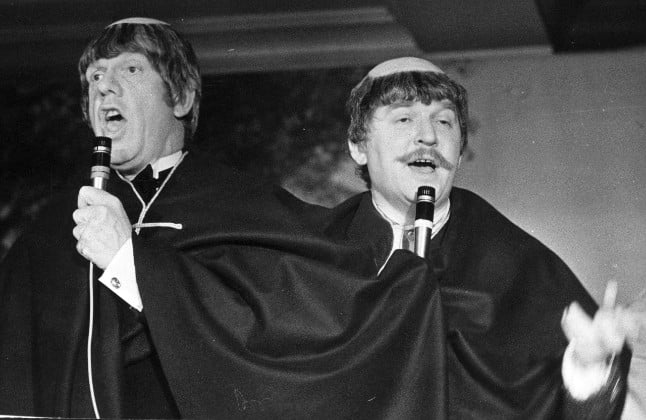 Hasse Alfredson and Tage Danielsson, the much-loved Swedish comedy duo active from the 1950s to the 1980s. Photo: Jan Collsiöö/TT

In a way, talking about having a “national sense of humour” is outdated, given that so much of the comedy we consume on TV or through podcasts is international, or, in the case of podcasts, aimed at a small niche. The days when you claim comedy shows on TV, such as Benny Hill, Monty Python, or in Sweden Hasse och Tage, as somehow representative of the nation are long gone.

But if you go beyond comedy and look at the jokes people themselves make in person or on social media, you can still make out national differences.

Every time I return to the UK, for instance, the person who checks my passport always seems to make some kind of light-hearted comment or joke, like, “You’ve got your hands full,” if I’m travelling alone with my children. Humour isn’t used as much to lighten interactions between strangers in that way in Sweden.

Instead, Sweden is a consensus culture, a culture of rule-following, and a culture where having overblown artistic or intellectual pretensions is frowned upon. Very often this is reflected in the humour.

Is the insistence on watching the otherwise justly forgotten 80s jousting movie Ivanhoe on New Year’s Day a sort of national joke? I’d argue it is, as is Disney on Christmas Eve, the Melodifestivalen-watching parties where highly educated PhD students take manufactured pop extremely seriously, or the groups of friends who meet every single Friday to watch the crushingly dull geography quiz På Spåret.

“We do it because we do it,” a Swede is likely to smile with satisfaction when challenged.

At root, this is a sort of celebration of consensus. Swedes find it very funny to follow a rule or tradition that is self-evidently not worth being followed.

If you look at hit humorous Facebook groups in Sweden in recent years, there’s a definite amusement at the absurd, grotesque, and simply silly (at least in the ones followed by my Swedish wife). The success of groups like the now-defunct Svåra Föremål (Troublesome Objects), Fullständigt ointressant information (Totally uninteresting information), or Lokaltidningsbesvikelser (Local newspaper disappointments), shows Swedes’ revelling in the bad taste or tediousness of their compatriots.

The humour here lies somewhere in the disconnect between the effort made and the pointless result, between artistic aspirations and irredeemable ugliness. As such it reinforces Sweden’s take on Jante’s Law, that sentiment of “you’re not to think you’re someone special”, in much the same way that the British use humour “to knock someone down a peg”.

One recent post on Fullständigt ointressant information, where users compete to share the dullest possible anecdotes or insights, sums up a certain brand of Swedish humour.

“Last night I dreamed that they had taken away VAT from dill. I was in total bliss.”

Here there’s the admission, even pride, in a dull internal life, a subconscious concerned with VAT and that most Swedish and swamp-tasting of herbs. This is very Swedish.

These are the Swedish equivalent of “Irishman” jokes in England, or of the short set-up and punchline jokes beloved of schoolchildren in the UK, and perhaps everywhere.

They’re generally not very funny (but then again, nor are their British equivalents). Bellman jokes were originally supposed to be about the 18th century song-writer Carl Michael Bellman, but the Bellman figure has come to stand for a sort of every-Swede.

Here’s a collection of Bellman jokes, and here’s an example of a Bellman joke (courtesy of Wikipedia).

A Dane, a Norwegian and Bellman made a wager on who could remain inside a goat pen the longest. First out was the Dane, who came out after just 10 minutes yelling “Damn! The goat stinks!” After him the Norwegian went in, and after half an hour he came out yelling, “Damn! The goat stinks!” Finally Bellman went in. After two hours the goat came rushing out yelling “Damn! Bellman stinks!”

Norgehistorier are very similar, but more like England’s ‘Irish’ jokes, as they rather unfairly tend to focus on the country ways and perceived low intelligence of Norwegians (Swedes should be aware that while Norwegians may be the butt of Swedes’ jokes, Swedes are the butt of jokes in Norway, Denmark AND Finland). Here’s a collection.

Two Norwegian policemen found a dead body in front of a Peugeot. “How do you spell Peugeot,” one asks the other. “No idea, let’s move him in front of a Fiat instead.”

Gothenburg is the city most renowned in Sweden for its sense of humour, with the city’s humour heavily based around puns and wordplay. The term Göteborgsvits, or Gothenburg pun, dates back to the second half of the 19th century, so it has pedigree.

What’s prized among people from Gothenburg is mental quickness, spotting a potential pun or play on words and turning it immediately into a joke, so examples of Gothenburg puns on the internet cannot really capture it. What would be brilliant in the heat of the moment comes across more like a Christmas cracker joke when written down.

But here’s an example nonetheless:

How many Gothenburgers live in Canada?

The sense of humour in Scania (or Skåne in Swedish), Sweden’s southernmost county, seems more similar to that of Denmark, with its culture of mickey-taking and teasing, than to that of much of the rest of Sweden.

We are currently trying to build a summer house in the countryside an hour outside Malmö, and more or less every time our very neighbour comes to survey our progress, he says deadpan, “so, when are you moving in?”, the joke being, of course, that we aren’t, and won’t be for a year, or (God forbid) many years. It strikes me that this is very close to the sort of dig someone might make back home in England.

Do Swedes have ‘banter’?

In Britain, there’s a great love of ribaldry, humorous repartee in the pub, or more recently on the Whatsapp groups that groups of friends have set up to replace it.

The back-and-forth flow of British conversation, with its frequent interruptions and interjections, works well with this. In Sweden, people tend to talk in longer chunks, and interrupt each other less, making Swedish pub chat more likely to be based around funny anecdotes.

Swedish comedy on TV has tended historically to be based around unsubtle skits and slapstick in the vein of the UK show Little Britain (just less good). It’s generally rather unfunny in my opinion, although it should be pointed out that the Swedish comedian Petra Mede went down surprisingly well among UK audiences when she presented Eurovision in 2013 and 2016.

The rise of podcasts has given a new generation of standup comics a way of reaching their audience, leading to a new brand of very dark, taboo-breaking humour, with comics like Sandra Ilar, Johannes Finnlaugsson and Kristoffer K Svensson, or the rapper Mr Cool, who caused a scandal with a comedy rap about paedophilia.

Some of the new generation of Swedish stand-ups, such as Fredrik Andersson, Tobias Persson and Evelyn Mok, have even managed to cross the North Sea and make a living out of their comedy in the UK.

So who said Swedes can’t be funny?

How hard is it to make Swedish friends? Do you tend to hang out with non-Swedish people? Have you felt lonely in Sweden?

Tell in the form below: