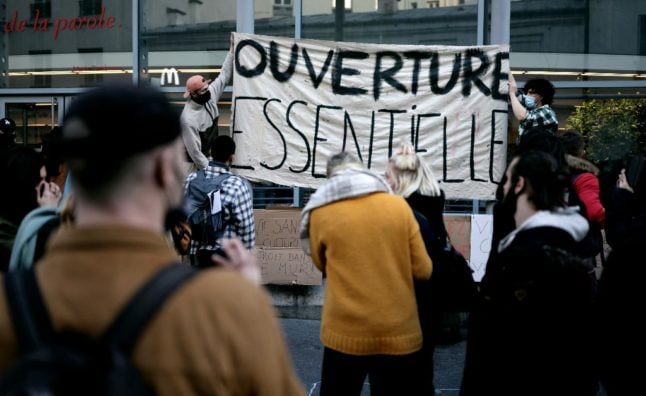 Theatres, cinemas, museums and other cultural spaces have been shut since France’s last full lockdown in October, and have remained closed despite most businesses reopening in December.

Pressure has been building for weeks and thousands marched in cities across France last Thursday to demand a reopening — with social distancing — of the cultural sector.

The Paris march ended with around 50 people forcing their way into the shuttered Odeon Theatre and refusing to leave.

Similar actions were seen on Tuesday at two other theatres — the Colline in eastern Paris and the National Theatre of Strasbourg.

Karine Huet, secretary general of the National Union of Musical Artists in France, said “this is a national movement”.

“Regional unions have responded and it’s starting to build. They are getting organised,” she told AFP from inside the Odeon on Tuesday.

Culture Minister Roselyne Bachelot visited the Odeon on Saturday and vowed to continue talks, but the union response has been unequivocal.

“Occupy! Occupy! Occupy!” was the call on Tuesday from the culture section of the CGT union, adding that this was a direct follow-on from the “Yellow Vest” protests that rocked the country two years ago.

At the Colline Theatre, dozens of students were seen with signs reading: “Opening essential” and “Bachelot, if you don’t open, we’re coming to play at your house”.

A source from the theatre said some 30 arts students had been allowed to enter the theatre by its director, the celebrated theatre writer and director Wajdi Mouawad, who was in the middle of rehearsals when they arrived on Tuesday.

Meanwhile, students in Strasbourg described their protest as an “act of mobilisation aimed at showing the government the gravity of our situation and to improve the rights of freelancers hurt by the health crisis”, calling for similar occupations across France.

As well as a reopening of cultural spaces, the protesters want an extension of the tax exemption for freelancers (currently in place until August 2021), and better support for other seasonal and self-employed workers, as well as urgent efforts to address the financial and mental health crises faced by students amid the pandemic.

France has one of the world’s most generous support systems for artists, providing a living wage to all sorts of people working in the arts and media. But the system has been strained by the upheaval of the pandemic, and many have fallen through the cracks.

There is also consternation over some of the government’s decisions, such as keeping large museums shut while allowing small private galleries to reopen.

Production of Salars – a type of cows’ milk cheese from the central French département of Cantal – has been halted for an indefinite period, as France suffers its worst drought on record.

Across the country rivers have run dry and water restrictions have been imposed – and now the cheese-makers are affected too.

The Salars cheese is an AOP (Appellation d’Origine Contrôlée), meaning the rules for its production are carefully defined – to be authentic, the cows’ diet must be at least 75 percent grass from pastures within the Auvergne region.

But as the drought continues, the normally fertile volcanic earth in Auvergne has gone hard and dry, and the grass has died – for the 78 AOP cheese producers in the region, their cows have not been able to graze for weeks.

READ MORE: Ask the expert: Why is France’s drought so bad and what will happen next?

“There is nothing left to eat at my place,” said Laurent Roux, a farmer at Gaec de la Calsade in Cantal, to Francetvinfo.

“In some places, the ground looks like ashes. It’s dust,” he added. Roux’ cows have not been able to graze since June 25th.

While this is the first time a full production stop for Salers has occurred, it is not the first time the AOP has had to contend with challenging climate conditions.

Some farmers had to temporarily suspend production in 2017, and in 2019, the AOP requested a waiver to decrease cows’ share of grass in their diets to 50 percent rather than the usual 75 percent.

However, farmer and head of the AOP, Laurent Lours, said this option was not on the table this year. “It is not worth it because we do not even have 50 percent of the grass,” he told the local station of France 3.

He expects production to drop by at least 15 percent this year, as the cheese is only produced on farms between April 15th and November 15th.

For individual farmers, many will turn to Cantal cheese (rather than Salers), which has less restrictive regulations for its production. Doing so also means that they will earn less – a loss of €200 per 1,000 litres of milk.

As for consumers, they can expect a shortage in stores and increase in prices for Salers cheese.

The drought is expected to continue for the foreseeable future, with the possibility of impacting other cheeses and AOP products.

In Switzerland, producers of Gruyère cheese are also worried about a lower quantity of milk production and are considering bringing their cows down to the plains earlier than usual this season.

From the mussels in the bay of Mont-Saint-Michel (as a result of a lack of fresh water in the rivers) to the Espelette peppers being lost to high temperatures, drought will likely impact a range of France’s unique ingredients.