Atletico Madrid's Wanda stadium on the eastern side of the Spanish capital was transformed into a huge vaccination centre on Thursday, where firemen, police and civil protection officers got their first jabs against the coronavirus.

Around 1,000 people were invited on Thursday, February 25th, to be immunised with the AstraZeneca vaccine at the 68,000-seat venue.

“I will continue to be careful and keep my distance, always wear a mask, but at least I will be more relaxed,” 53-year-old police officer Maria Teresa Teriza-Hernandez told AFP.

The makeshift centre in the home ground of the current leaders of the Spanish league will have the capacity to vaccinate between 350 and 400 people an hour once it is fully up and running.

“The goal is to vaccinate as many people as possible. This is a mass vaccination” to reach all firefighters and police officers, the head of the vaccination centre, Victor Escudero, said.

Vaccinations are also being carried out at neighbourhood public health centres.

Those being inoculated at the stadium are “professionals on the front lines” of the fight against the pandemic, the head of the regional government of Madrid, Isabel Diaz Ayuso, said during a visit to the stadium. “We therefore consider it necessary to give them the vaccine as soon as possible,” she added. 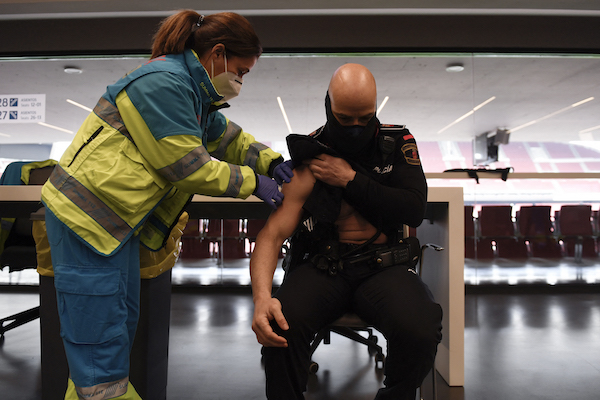 In addition to police, firefighters and other civil protection workers, teachers from public and private schools will also soon be vaccinated at Wanda and the new Isabel Zendal Hospital which opened in December.

The venue was built in record time as a surge of infections was straining Spain's public health system.

But it has sparked controversy because it cost more than twice the original budget, with critics dismissing it as an extravagant vanity project by Madrid's regional government.

So far, some 1.2 million people have been vaccinated in Spain since the start of the immunisation campaign which began just after Christmas, with care home residents first in line along with their carers.

The government aims to have 70 percent of Spain's population of around 47 million vaccinated by the end of summer.