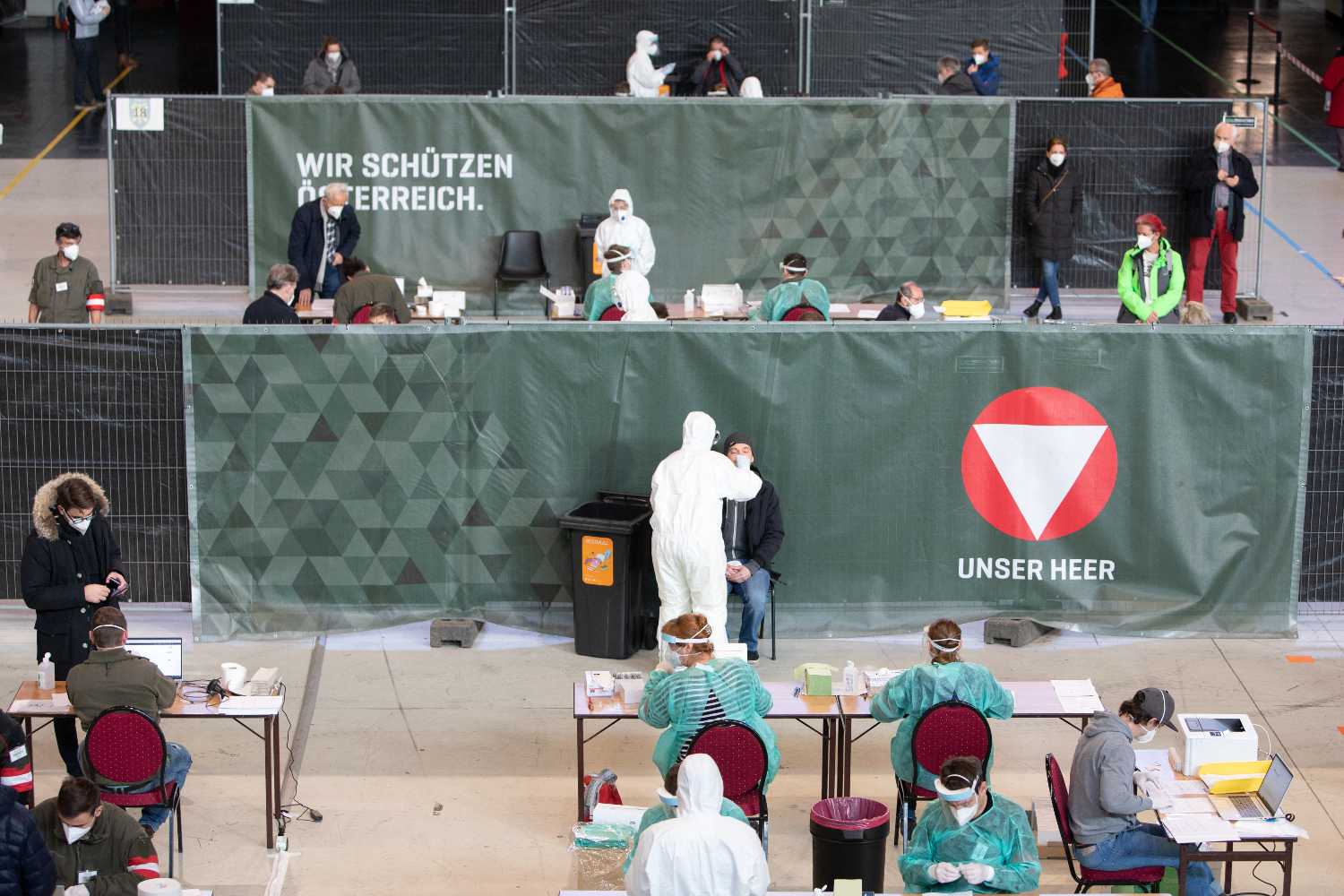 The small nation with a population of just under nine million tested three million people last week alone, with the mass-testing strategy forming a key plank for getting pupils back into the classroom.

Half of those three million tests were administered in schools, where twice-weekly tests have been mandatory since in-person lessons restarted earlier this month.

Only a tiny percentage of parents have refused to have their children tested under the scheme — and those children are not allowed to return to school.

The other 1.5 million tests were carried out at more than 500 dedicated centres, around 900 pharmacies and roughly 1,000 companies.

“Our strategy is to have a high frequency of tests and to make them very easily accessible — it’s the only way to keep the pandemic in check,” Katharina Reich, the health ministry’s chief medical officer, told AFP.

A negative test result, no older than 48 hours, is now required at a range of locations — from hair salons to elderly care homes, or ski resorts.

The seven-day average of daily tests is 24 per 1,000 in Austria, compared to 7.7 in Britain and just 1.77 in neighbouring Germany, according to the Our World In Data website.

READ MORE: How Austria plans to test its way out of lockdown

“But we want that to be higher — much higher,” Reich said, explaining that the goal is “for 60 to 70 percent of the population to get tested at least twice a week, or even three times a week if they want to see risk groups, like the elderly.”

She says tests are a key weapon in the fight against the pandemic until the vaccine rollout has been completed.

From March 1, every person will be allocated up to five “living-room” antigen tests, so called because they only require a shallow swab of the nasal cavity and so can be done at home.

Yveta Unzeitig, who has already been tested several times because the publishing house she works at participates in the testing drive, said she thought expanding tests was a good idea.

“It sounds smart, but they should do it for everything — with a negative test, I’d also like to be able to go to a restaurant, or for a coffee with friends,” she said, referring to the still closed hospitality industry.

“It sounds like it’d make all of us safer, and like we’d then able to return to normality,” said her daughter Yvonne, who works at an insurance company.

Professor Monika Redlberger-Fritz, head of department at Medical University Vienna’s centre for virology, says that turning up as many cases as possible through testing is “very, very important”.

However, she cautions that a negative antigen result from a nose or throat swab only shows that the person is not highly contagious — not that he or she is not contagious at all.

“Just because you take the test, that doesn’t mean that you can go straight to your grandma and hug her and kiss her,” she said.

FFP2 masks and an interpersonal distance of two metres (six feet) continue to be mandatory in places like stores and public buildings.

Like elsewhere, Austria is also contending with the spread of virus mutations, including the more infectious South African variant.

How successful the millions of tests have been will be evaluated over the coming weeks, especially by looking at changes in intensive care unit capacities, said Redlberger-Fritz.

Increasing testing is partly a response to growing resistance to lockdowns — hundreds now protest against the government’s pandemic measures every weekend — and a widespread “pandemic fatigue”.

The first mass testing drives began late last year, but the initiative seemed to falter as relatively few people turned up to the designated centres: “Mass tests without masses,” ran the headlines.

However, making tests mandatory for some sectors and investing more in public awareness campaigns seems to have had the desired effect.

At one pharmacy in Vienna, 21-year-old Sascha said he, like many Austrians in recent weeks, had got a test “to be able to get a haircut”.

But he said he finds the requirement “arduous” and says he will only get tested — or vaccinated — if he absolutely has to.

The bells of Vienna’s St. Stephen’s Cathedral rang out in memory of Lisa-Maria Kellermayr on Monday, and hundreds of people held a candle vigil outside, after the 36-year-old doctor was found dead at her practice on July 29.

She had long been the target of death threats because of her criticism of the widespread anti-lockdown protests of 2021.

An autopsy later confirmed that Kellermayr had taken her own life.

Austria has found itself deeply polarised over coronavirus restrictions and in particular a government policy –subsequently dropped — of making vaccination against the coronavirus compulsory.

Kellermayr — whose practice was in the region of Upper Austria where immunisation rates are particularly low — had frequently complained of the menace.

“For more than seven months, we have been receiving… death threats from those opposed to coronavirus measures and vaccinations,” she wrote at the time, sharing a message from one internet user who said they would pose as a patient in order to attack her and her staff.

She described how she had “invested more than 100,000 euros” ($102,000) in measures to ensure her patients’ safety and was on the brink of bankruptcy.

Then, at the end of June, Kellermayr announced on her professional website that she would not be seeing patients until further notice.

Daniel Landau, who organised a memorial vigil for her in Vienna, said that Kellermayr had become a virtual recluse for several weeks. “She didn’t dare to leave” her office, Landau told AFP.

On Saturday, the head of Austria’s doctors’ association, Johannes Steinhart, said that while aggressive behaviour towards medical staff was not new, it had been “fired up and noticeably aggravated” by the debate over Covid-19 and vaccines.

The police, who had previously suggested Kellermayr was exploiting the situation for attention, insist they did everything to protect her. The local prosecutor’s office also rejected suggestions it could have done more.

“As soon as we received the police report (identifying one of the suspects), we sent it over to the relevant authorities in Germany,” spokesman Christoph Weber said.

On Friday, prosecutors in the neighbouring German state of Bavaria said a 59-year-old suspect was being investigated by a specialist hate speech unit.

At the beginning of the week, Austrian President Alexander Van der Bellen visited the small town of Seewalchen where Kellermayr lived to lay flowers in her memory.

After news of her death broke, he had appealed to Austrians to “put an end to intimidation and fear”.

But on some Telegram groups, the hateful messages continue.

“Some people are celebrating her death; others believe the vaccine killed her,” said Ingrid Brodnig, a journalist and author who investigates online disinformation.

“Stricts laws exist” already against online hate, but not enough is done to implement them, Brodnig said.

One government minister has floated the idea of a separate prosecutor’s office to target such cases. Doctors and researchers have also been targeted elsewhere.

French infectious disease specialist, Karine Lacombe, described how she had been vilified for her work as part of a collective of doctors combatting coronavirus-related disinformation.

She, too, complained that the response from the authorities in the face of threats was not robust enough, and has scaled down her public appearances this year.

“You end up thinking that the risk isn’t worth it,” she told AFP. “In that sense (the aggressors) have won, they are gagging us,” she said.