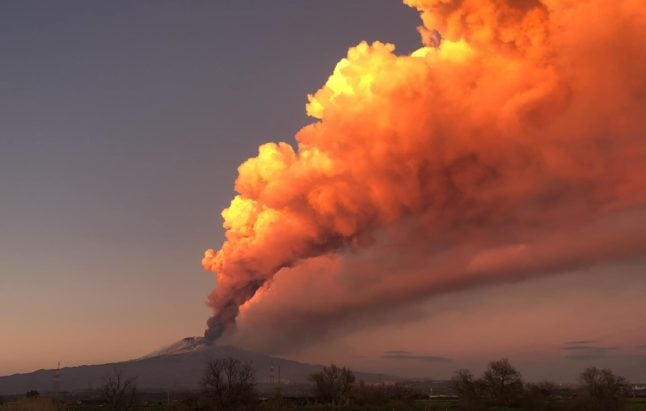 Experts insist that the increased activity recently is not unusual or concerning – after all, Etna is one of the world’s most active volcanoes.

“We’ve seen worse,” the head of the INGV National Institute for Geophysics and Vulcanology in the nearby city of Catania, Stefano Branco, told Italian news agency AGI on February 16th.

#Etna is building up for her 12th paroxysm at the Southeast Crater in little less than a month. Scenes of mild Strombolian activity at sunrise on 12 March 2021, seen from home in Tremestieri Etneo. Activity is now gradually increasing. pic.twitter.com/egB66RQ4a0

The airport in nearby Catania was closed on February 16th as volcanic activity covered the nearby area in ash.

#Etna erupting this evening in #Sicily video by a family friend pic.twitter.com/2lY16kiOUO

Branco insisted that the activity was “not at all worrying”.

Lava flows high on the east flank of #Etna after its brief, violent and spectacular (and entirely harmless) paroxysm on the evening of 16 February 2021, seen from the village of Santa Venerina. pic.twitter.com/0NqYrgRC6F

Many such eruptions in the past have shut down the airport and covered Catania in ash.
Emergency authorities said that they were monitoring the situation closely in the three villages at the foot of the volcano: Linguaglossa, Fornazzo and Milo.

Mount #Etna is doing its thing again—a big Strombolian eruption from the summit.

In this video (via @tancredipalmeri), look at the large, orange blob at the base of the eruptive column.

Images on the 16th showed a spectacular rose-coloured plume of ashes above the snow-capped summit, but the cloud had largely dissipated by nightfall, while lava flows continued to glow.

Massive explosion on #Etna this afternoon. Two columns of ashes and smoke are visible from its top: one is very vertical, demonstrating the power of energy released. Fountains of lava are spectacular at dusk. A Lava flow, long and large, goes towards the desertic Valle del Bove pic.twitter.com/nT1zEc3ZVd