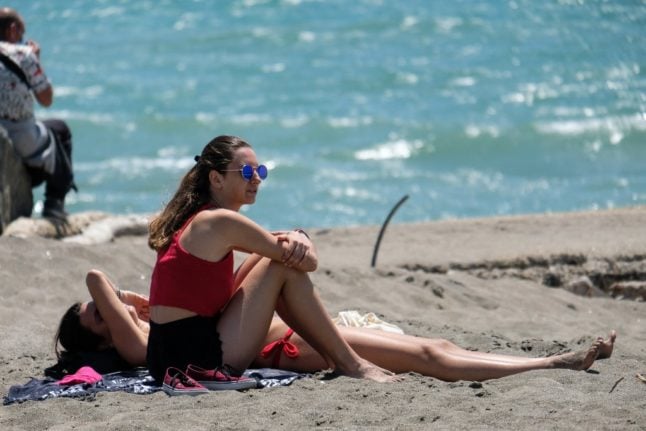 What will beach holidays in Italy look like this year? Photo by Andreas Solaro/AFP

At the moment, most travel to Italy is restricted from non EU-countries, including the US.

And while entry into Italy from European countries is allowed, there are strict testing requirements in place.

EXPLAINED: Who can travel to Italy right now?

Even once you’re in Italy, restrictions make most tourism impossible. Right now the country is under domestic travel restrictions as well as a 10pm curfew. Bars, restaurants and non-essential shops are closed in many parts of the country, as are museums and other attractions.

But this does not seem to have stopped hopeful would-be visitors from planning holidays in Italy this summer, as bookings are reportedly flooding in.

“Reservations continue to arrive. To date we have 65 percent of what we recorded in 2019,”  Nicola Palomba, head of Confidustria’s tourism group and a representative of a five-star hotel in Pula, Sardinia, told the Il Sole 24 Ore newspaper on Tuesday.

“Let’s just say that there is a significant recovery.”

While 60 percent of those bookings were from Italians, he said, the rest mainly came from Switzerland, Germany and England.

Flight reservations to Italy from the UK shot up in February after the British government announced it may remove restrictions on international travel in May.

READ ALSO: Here’s what you should know before booking a trip from the UK to Italy

However, there has been no word from Italian authorities on when it will lift its own travel restrictions to allow summer tourism.

The Italian government announced the country’s latest emergency decree on Wednesday, which confirmed that current travel restrictions – international and domestic – are to stay in place until at least after Easter. The rules are in place indefinitely, with the next review due on April 6th.

If Italy does remove travel restrictions for summer, any changes are unlikely to be confirmed for weeks or even months yet.

It’s also unknown whether travel would be allowed to the same extent as last summer, when Italy relaxed almost all restrictions – and a sharp rise in coronavirus infections in the country was later linked to international travel.

Right now, concern is growing about a number of new coronavirus variants recently detected in Italy, and the health minister has said restrictions can’t be lifted until the potential risks of these new strains are better understood.

Meanwhile, Italy’s vaccination programme is making slow progress, with only 2.3 percent of the population vaccinated so far.

Even under new plans to speed vaccinations up in the coming months, Italy is unlikely to have the majority of the adult population vaccinated until September at the earliest.

Italy’s tourism minister has indicated that the country is keen to open up to summer travel as soon as infection rates and vaccination campaigns allow for it.

But there’s still no certainty yet for those hoping to travel, or for the many in Italy who make a living from the tourist trade.

“At the moment few, very few forecasts can be made,” said Costanzo Iaccarino, president of Federalberghi Campania, which represents hotels in and around the Naples area.

“In 2020 the season started at the end of June and lasted two months. We found ourselves going back to work at the last moment. This year, we should start again from May,” he said.

“However, we should ask ourselves how and where,” he said. “We will certainly need to be more careful and prudent than last year.”

On the island of Sardinia, hoteliers are also talking about possible restart dates in May.

“We are looking at reopening on May 14th,” Alessandro Covertino, director of the Hotel Abi d’Oru in Sardinia, told Il Sole 24 Ore. “For reservations, the signs are very encouraging despite the fact that the situation is still uncertain.”

But making plans to travel to Italy’s holiday hotspots is still far from straightforward.

“We still do not yet know how many and which flights will connect Sardinia with the peninsula and other international centers,” Palomba said.

Business owners also said authorities needed to do more to reassure tourists and give clarity about what would happen if they were to get sick during their trip.

What measures are being considered?

Hotels and tour operators are discussing implementing everything from flexible cancellation policies to on-site testing for guests, while local authorities in many regions say negative test results will be required for travellers.

Some hotels told Il Sole 24 Ore they were allowing guests to book and pay nothing until arrival, while others were looking at offering insurance policies covering all expenses in case of cancellations.

The Italian government on Wednesday also announced that it was looking into increasing the number of ‘Covid-tested’ flights to the country, after a limited number began operating between Italy and the US from December.

Passengers on these flights, operated by Delta in partnership with Alitalia, need to show a negative virus test result from within the 48 hours before boarding, and are required to take another test upon arrival.

The European Commission meanwhile is expected to propose a ‘green pass’ – a form of health passport which may allow people to travel within Europe if they have been vaccinated, or have tested negative.

But, while some European countries including Spain are pushing for some form of vaccine passport scheme to help tourism restart, this is not something the Italian government is currently considering – even though some regional authorities are in favour of the idea.

Sardinia’s regional government is among the local authorities in Italy which have voiced support for the idea of vaccine passports for visitors.

In any case, Sardinia’s governor Christian Solinas says there will be health monitoring in place in the region.

“Those who enter Sardinia will have to show a certificate demonstrating that they have tested negative (for the coronavirus) or that they have been vaccinated,” he told daily newspaper L’Unione Sarda.

“The system of checks will be in place long before the start of the summer season”.

Several other Italian regions are also reportedly considering bringing in similar checks. However, at this point nothing is yet confirmed.

What are Italy’s current travel restrictions?

Even trips within Italy remain restricted for now, with travel between regions only allowed for essential reasons such as for work or to return to your place of residence.

At the moment, negative coronavirus test results are required to enter Italy from any country. There are many additional restrictions – including mandatory 14-day quarantine or even a complete ban on non-essential travel – depending on where you’re travelling from.

You can find out what the current restrictions are on travel from your country by completing this form on the Italian government’s website.

For more information on international travel to and from Italy, see the Foreign Ministry’s website

The countries announced their restrictions – mostly amounting to compulsory tests and masks – on a unilateral basis at the end of last week, but there have been calls for greater co-ordination at an EU level.

There is now a meeting scheduled for Wednesday of the EU Integrated Policy Response Capability to discuss coordinating measures, with an insider telling Politico: “The idea is to harmonise, but without being extremely prescriptive.”

The meeting has been called by Sweden, which now holds the rotating presidency of the EU.

So what measures are likely?

At present the countries that have announced restrictions have only imposed testing and mask rules – there is no requirement to show proof of vaccination and no travel bans. All measures only apply only to travellers from China.

A meeting of the European Health Safety Committee last Thursday did not produce any concrete measures, with EU Health Commissioner Stella Kyriakides merely urging member states to coordinate quickly. It was after this that some countries announced their own restrictions.

If anything more concrete comes out of Wednesday’s meeting, it is likely to refer to testing or mask rules only and like the previous EU Covid travel policies, will be advisory for countries to follow.

Because borders are a national competence, countries can impose their own measures without having to consult the EU.

Despite the introduction of the EU digital vaccine passport, countries never managed to entirely co-ordinate their travel rules during 2020 and 2021.

In most EU countries the health pass or vaccine pass apps remain active, and could be used again if necessary.

Will there be travel bans?

At this stage more draconian restrictions – such as the ‘red lists’ or ‘essential travel only’ rules of 2021 seem unlikely.

Most EU countries have a high level of vaccine cover, so would probably only resort to travel restrictions if new variants – against which current Covid vaccines are not effective – emergence in China (or any other country).