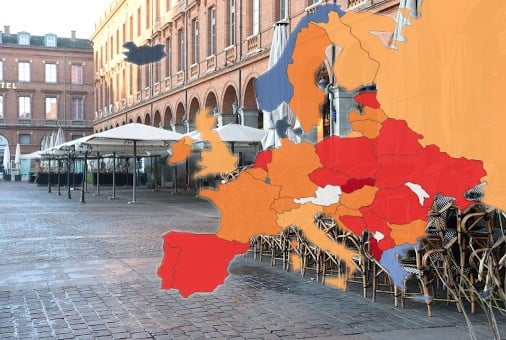 More than 500,000 people have officially died of Covid-19 in the European Union (789,310 in Europe as a whole), according to a tally compiled by AFP on Wednesday.
The 35m confirmed cases seen across Europe rank it second only to The Americas (North and South America), with 47m cases as the worst hit of the World Health Organisation's six regions, according to its Covid-19 dashboard.
The situation in Europe, has nonetheless improved in some of the continents worst-hit countries over the past month, with cases falling off overall since the start of January, although several countries countries have been hit by rising cases or even a third wave, keeping the case rate for the bloc stubbornly high.
These interactive charts (which may take a few seconds to load) from Our World in Data shed some light on how the countries covered by The Local's network have been faring.
You can extend the blue time bar and even add more countries if you wish.
1. Daily new confirmed cases
The chart below shows a rolling seven-day average for new Covid-19 infections.

The most obvious change since The Local's early January charts overview, has been the dramatic decline in daily new confirmed cases in the UK  since the end of the first week of January, partly following the lockdown imposed on January 6th and perhaps also showing early effects from the rapid vaccination rollout.

Sweden, Denmark, Germany, Italy, Austria and Switzerland have all also reported declines from their second wave peaks, while France and Spain are the only two countries covered by The Local's network so far to have experienced a rise in infections since January.

This perhaps reflects France's decision to come out of lockdown relatively early on December 15th, and Spain's decision not to impose a second lockdown at all.

France has sought to keep down rates with a 6pm nationwide curfew and the continued closure of restaurants, bars and other venues. French President Emmanuel Macron has so far resisted imposing a third national lockdown despite pressure from hospital chiefs whose wards and intensive care units are being stretched once again.

In Italy a nationwide curfew is still in effect from 10 pm to 5 am and travel between regions is prohibited, but restaurants and bars are allowed to open until 6 pm.

Spain saw a surge in infections at the start of the year, with health officials blaming an easing of restrictions over the Christmas holidays.

Since then, the incident rate has started to come down as regional governments, which are in charge of health care, have cracked down.

Measures imposed include 10 pm curfews, the closure of bars and restaurants and bans on leaving or entering a region. The restrictions have helped to flatten the virus curve.

When you compare the infection rate to the size of population, the chart (as seen below) looks slightly different.

The high number of cases per capita Sweden suffered at the start of January stands out, as does the rapid decline in cases after the government imposed its toughest restrictions yet, with distance learning for 13-year-olds and up, and a new pandemic law empowering the government to fine shops and gyms for the first time.

The per capita chart also highlights the extent of the third wave in Portugal – which saw cases rocket upwards in January — and in Spain, which recorded more cases per capita at the end of January than it did even at the peak of its second wave in November.

Denmark, which peaked a few weeks earlier on December 20th, has seen the number of cases fall from one of the highest to one of the lowest per capita rates in Europe,  after the lockdown imposed on Christmas Day was extended due to fears about the UK and South African Covid-19 variants.

Germany, where the second wave peaked a few weeks before the UK on Christmas Eve, shows a more gentle decline, with a short post-Christmas bump in case numbers.

Almost everything has been closed in Germany apart from essential shops since December, households are only supposed to meet with one other person and most schools are closed.

Despite the declining rates, the government is likely to extend most measures until mid-March out of fear of the UK and South African Covid-19 variants.

As the high level of testing in Denmark and Austria, makes the other countries bunch together on the charts, here's a chart with the two leading countries removed.

Here you can see France's strong performance, with a surge in testing around Christmas, and also high levels of testing in Spain, reflecting the country's third wave.

Germany, which briefly led Europe in testing in April, now tests a lower share of its population than any other country covered by The Local's network.

The map and chart below show the positivity rates of tests in the past week, showing how Spain is now the hotspot for infection in The Local's network, and how in Denmark, an extremely high testing rate is combined with low levels of infection.
(Change World to Europe on the chart)
10. How strict are governments?
All the graphs above very much depend on the strategies of each government and the restrictions they have imposed. Spikes are often followed by lockdowns which have resulted in rates dropping.
The Local has been reporting over recent days and weeks government measures are changing constantly as infection rates climb, fall or plateau.
The chart below tracks the Government Stringency Index, put together by the Oxford Coronavirus Government Response Tracker (OxCGRT).
Our World in Data says: “The chart here shows how governmental response has changed over time. It shows the Government Stringency Index – a composite measure of the strictness of policy responses.”
The index looks at measures including school and workplace closures, restrictions on public gatherings, transport restrictions and stay-at-home requirements and gives a score out of 100.
Here, what stands out is the relative relaxation of France's restrictions since the country came out of lockdown on December 15th, with the country falling from the strictest among the countries covered by The Local's network to the most lax after Switzerland, which the index has ranked the least strict since the start of January.
Since Christmas, Germany, Austria and the UK have had the strictest regulations in place, with the latter two imposing stay-at-home orders, and Germany closing everything except essential shops and recommending that each household meet only one other outside their bubble.
The extent of restrictions in Italy and Spain vary considerably by region, but taken together they are tough enough for OxCGRT to rank both countries as among the strictest.
Valencia in Spain has closed businesses, restaurants, and brought forward their curfew, while Madrid has tried to keep restrictions as light as possible.
In Italy, the northern Bolzano (Alto Adige) province has now gone into strict lockdown after the first case of the UK variant was detected. Umbria and Sicily are also classed as 'orange zones' meaning moderate-high restrictions are in place including the closure of restaurants.