The first round of the election is just over 14 months away. Much can happen between now and then. But we are already in what I would call the magnetic zone or gravitational pull of the two-round election in April and May 2022.

A series of opinion polls published in recent days may seem absurdly premature. Polls are never premature for political junkies or politicians. Some of the opinion surveys look bad for Macron; others look better.

Either way, they cast an interesting light – not entirely negative – on Macron’s hopes of re-election next Spring, despite the multiple crises of his presidency and despite the fact that no sitting French government has been endorsed by the electorate since 1979. (I will justify that startling claim later.)

President Macron has been looking rattled in recent days – not quite his confident and some would say over-confident self. 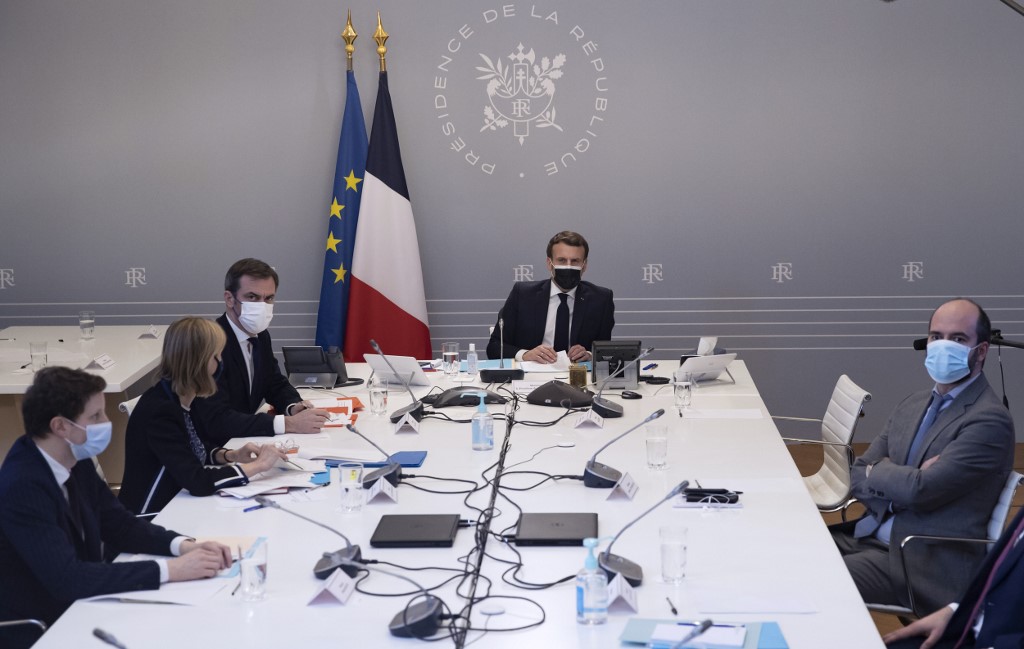 Reports of the meeting suggest that Macron pushed back against suggestions of a third lockdown. Photo: AFP

His decision (very much his decision) to refuse a third French Covid lockdown has startled and worried some of his most senior ministers. His misleading comments on the AstraZeneca vaccine – suggesting there is “evidence” that it is useless for the over-65’s when there is merely a shortage of trial evidence that it is useful – was an unusual gaffe for the young President.

In both these instances (which happened within a few hours of one another last Friday) Macron seemed to be thinking, at least partly, politically and electorally.

He wanted to show that he was shaping events – minimising Europe’s slow vaccine roll-out; dealing with the new Covid variants – not just submitting to them.

Macron’s intended narrative for the 2022 elections was: “There has been a big fall in French unemployment thanks to my structural reforms”. That claim has been destroyed by Covid-19.

His second intended narrative – a boom in France’s mood and economy post-pandemic thanks to a €150bn relaunch programme – has been wrecked by the second wave of the virius. A third wave, generated by the faster-moving British variant of Covid-19, now threatens.

The President needs a new narrative – ideally with himself in the starring role.

His decision last week to reject or at least postpone a third French lockdown was a huge gamble. There may have been good reasons to spare a depressed nation a further “confinement” but there were also good reasons to take preventative action against the British and other variants.

IN NUMBERS Is the latest Covid data good enough to avoid a third lockdown?

Accounts of the meeting in which the decision was taken suggest Macron was influenced, at least in part, by a desire to show he was in charge and that France, under his leadership, could succeed in avoiding a third lockdown where most other European countries had failed.

How much has Macron’s mood been influenced by opinion polls? If you ask people close to Macron they say that he pays no attention to them. But politicians always say that.

There have been several interesting polls in the last two weeks. Those negative to Macron have been blown up in the Eurosceptic part of the UK media. The more positive ones have been ignored.

As background, it should be recalled that Macron’s monthly approval ratings are running in the late 30s and low 40s – a high figure for French president entering the last full year of his mandate.

One week ago a Harris poll suggested that the far right leader Marine Le Pen would come just ahead of Macron in the first round of next year’s election and just behind him – 52 percent to 48 percent – in the two candidate run-off.

Harris did not publish the second round poll, apparently because they were uncertain about its accuracy. Their findings suggested that a large chunk of French left-wing voters would abstain in May 2022, refusing to vote for Macron and refusing to block Le Pen.

The poll set alarm bells ringing – in the Elysée as much as anywhere else. If Le Pen could be that close, where could she be after another year of viral economic disruption and popular depression?

The first round poll put Macron ahead with 27 percent (three points up on his actual first round score in 2017). Le Pen was second on 25 percent (4 points up on 2017). Xavier Bertrand, the centre-right independent President of Hauts-de-France, the north east region, came third with 14.5 percent.

Ipsos also did a second-round poll. It showed Macron well ahead of Le Pen on 56 percent to 44 percent, a score less crushing than his 66-34 victory in 2017 but far ahead of the Harris poll and slightly better than one random poll taken last year (55-45).

So sighs of relief in the Elysée? Maybe. Certainly no jubilant headlines in the British Daily Mail or Express newspapers.

One final poll to consider, by Ipsos-Sopra Steria for France Info and l'Obs yesterday.

Asked who would “make the best president, 38 percent chose Macron, 30 percent Le Pen and 29 percent Xavier Bertrand. The rest – and especially all left-wing contenders – were nowhere.

It has long been my view that Le Pen will not win in 2022 but Macron could lose. 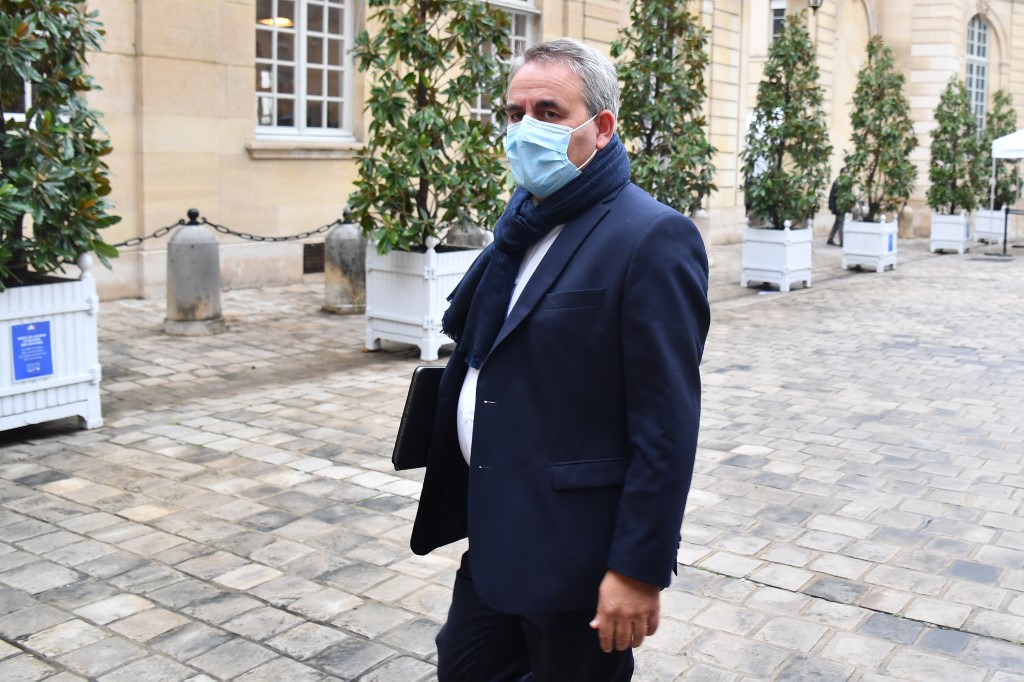 Xavier Bertrand – the one to watch for the 2022 election? Photo: AFP

He could be pushed out of the second round by a strong centre-right candidate. No such candidate has emerged – until now. It’s early days but Xavier Bertrand, moderate, competent, uninspiring – is emerging as the man to watch.

Can Macron still win? Yes, but he will be badly damaged if his gamble against a third lockdown last week proves to have been a costly error.

As I said at the start, you have to go back to 1979 to find a French election in which the government in de facto power – ie both the Prime Minister and President – were kept in office by the electorate.

The 52-year-old politician, who spearheaded the government’s fight against the peak of the Covid-19 pandemic, was a familiar face on television with his trademark brown beard.

Since leaving the post in the summer of 2020 and working as mayor of the Normandy port of Le Havre, his appearance has drastically changed with his hair and beard thinning and turning white suddenly.

“This is what had happened to me: I lost my eyebrows, and I don’t think they will come back,” he told BFMTV in an interview late Thursday.

“My beard has turned white, it’s falling out a bit and the hair too.

“The moustache is gone, I don’t know if it will come back, but I would be surprised,” he said.

“I have what is called alopecia,” he added, opening up about the auto-immune condition that accelerates hair loss.

He said the condition was “not painful, dangerous, contagious or serious”.

Philippe’s wry and avuncular style proved popular with many French and some speculated that his high approval ratings had caused tensions with Macron, with replaced him as Prime Minister in the summer of 2020.

He has now founded a new centrist party called Horizons that is allied with Macron’s ruling faction but also unafraid of showing an independent streak.

Some analysts see Philippe as an obvious potential successor to Macron, who must leave office after serving the maximum two terms in 2027.

And Philippe insisted that his condition would not stand in the way of his political plans.

“That doesn’t stop me from being extremely ambitious for my city,” he said referring to Le Havre.

Tellingly, he added: “It doesn’t stop me from being extremely ambitious for my country.”

With France buffeted by strikes and protests as the government seeks to push through landmark pension reform, Philippe gave his full backing to Macron for the changes.

He said he supported the changes “without ambiguity, without any bad note or any other kind of little complication”.