The number of coronavirus infections in Germany is going down. But can the country almost get rid of Covid-19? Some scientists believe so.

It's the news everyone in Germany has been waiting for: the second coronavirus wave appears to be past its peak.

The numbers of new infections are decreasing, by about 18 percent every week. But it's come at a cost: severe restrictions have been in place on everyday life in Germany for months.

Currently schools and daycare centre (Kitas) are closed except for emergency care, most shops are shut and socialising is restricted. Wherever possible, people are working from home.

These lockdown measures are scheduled to last nationwide until the end of February 14th.

If the number keeps going down, then Germany will hit its target of 50 new infections per 100,000 inhabitants in seven days.

That's the level authorities have been aiming for so that health officials can trace contacts of people infected by coronavirus. On Wednesday the 7-day incidence stood at 82.9.

The question is should restrictions be eased when this target is reached or is a whole new strategy needed?

Threat of a Covid resurgence

There is a huge debate over whether lockdown restrictions should be relaxed when this target is reached – or even before then.

Scientists, such as the Charité's Christian Drosten, have warned against loosening the measures too quickly due to the threat of variants spreading, and not enough people receiving the vaccination.

The worry is that a resurgence would come back full force.

It's not the first time that the number of new Covid cases have dropped off after a sharp increase in Germany.

Last spring, the health system was in danger of being overloaded. At that time, too, public life was severely curtailed – with success. The number of infections subsided and the spread of the virus seemed to be under control.

But by the end of summer, infections began to soar.

Once more, everyday life was restricted. Politicians hesitated to do this at first, but then more drastic measures were put in place until finally – only in these past weeks – some success was reached.

There is massive concern that this situation could be repeated, but may be worse due to variants: lockdown relaxations could lead to more infections, necessitating new restrictions, and so on.

The World in Data chart below shows how Covid-19 cases have been falling in Germany. 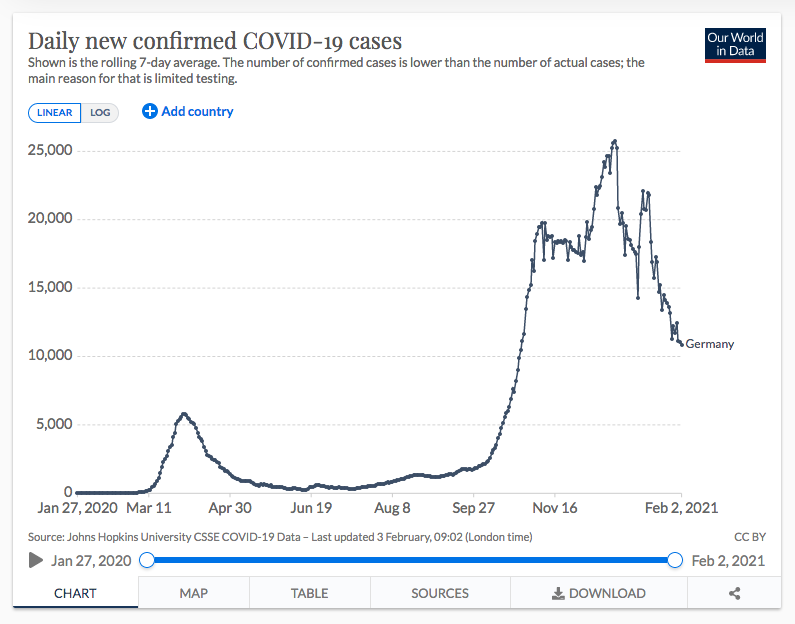 Time for a change in strategy?

“For many, the thought of this yo-yo lockdown continuing until the end of the year is depressing,” Michael Hallek told the Berlin Tagesspiegel.

Hallek is the director of the Department of Internal Medicine at the University Hospital in Cologne and has been looking after Covid 19 patients for months.

Some doctors like Hallek are considering what a way out of the lockdown vicious circle might look like. For them, one thing is clear: Germany's strategy so far in dealing with the virus is inefficient.

Although public life has been shut down since November, more than 50,000 people have died in this country from or with Covid-19.

Containing the spread of the virus, living with it, “flattening the curve” – that doesn't work in the long run, said Hallek. The virus is too contagious for that and too often causes severe illness in people.

Hallek and other researchers instead propose a change in strategy.

Relaxations of the lockdown should not happen at a 7-day incidence of 50 cases per 100,000 inhabitants – but only when the number of new infections is close to zero.

In return, restrictions would no longer apply nationwide, but only in areas where a certain incidence is exceeded.

They call this plan “no Covid”. Similar programmes – including the 'Zero Covid' strategy which aims to eliminate the virus altogether – already exist in other countries such as Taiwan, Australia or Finland.

Here, only individual cases have been reported for months, while everyday life continues almost normally.

Getting ahead of the virus

For Germany, a no Covid strategy would mean extending the current lockdown by around a month, according to Hallek. This price sounds high but may give the country a huge boost.

If the numbers of new infections are not low enough at the end of the lockdown, another rapid outbreak could develop within a few weeks, similar to what has happened in the UK and Ireland in recent months.

All the more so if the new, more contagious mutations of the virus then spread here too.

This danger must be prevented, said Hallek. “The clear recommendation is therefore to extend the lockdown,” he said.

If new infections were close to zero when the lockdown measures were lifted, the vicious circle of the pandemic rising and falling could be disrupted, said Dirk Brockmann, who is head of the Complex Systems Research Group at Humboldt University Berlin and models the spread of diseases.

Brockmann told Tagesspiegel that if this doesn't happen, the waves will continue. That's because political decisions influence the spread of the virus and containment measures always lag behind an actual outbreak. 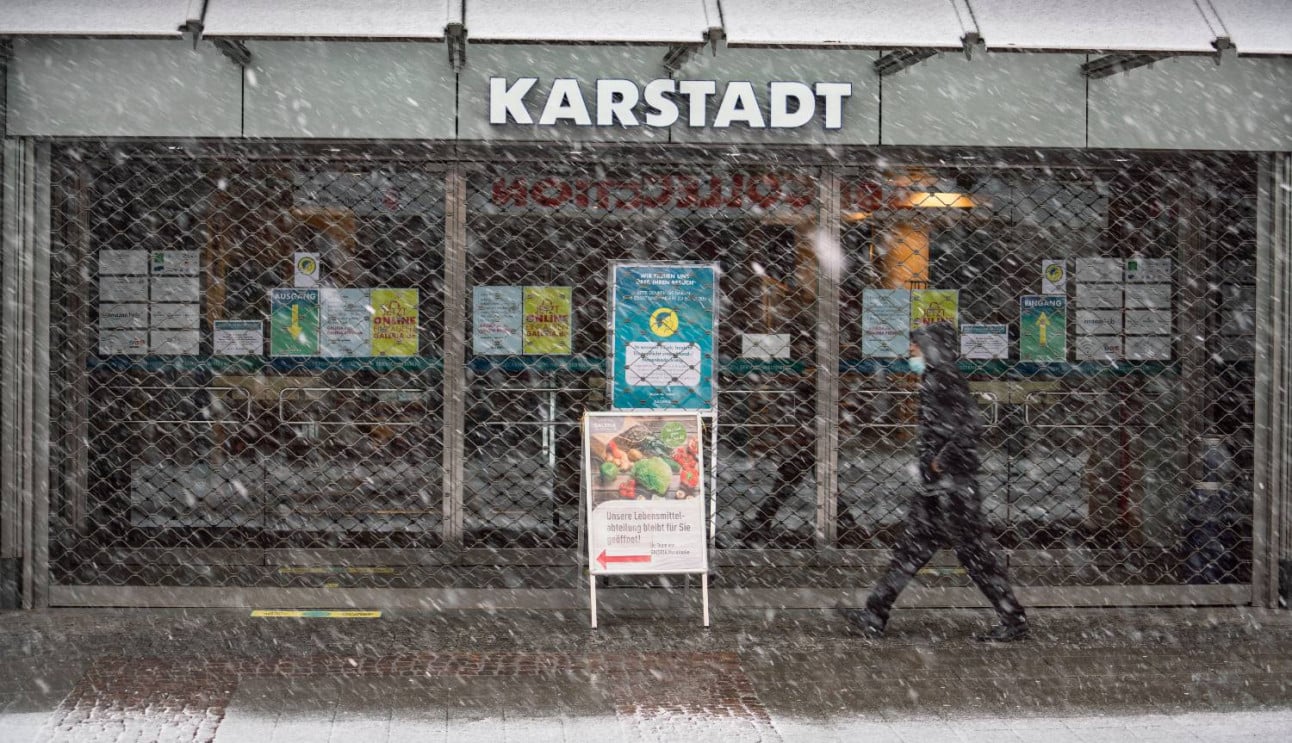 A person walking past a closed shop in Bad Homburg, Hesse. Photo: DPA

To stop this process, you have to turn it around, said Brockmann, and get ahead of the virus.

“If we can respond more quickly to outbreaks, the situation changes completely,” said Brockmann, although the mechanisms for dealing with the virus are the same: testing, contact tracing, isolation.

But the fewer new cases that occur, the easier it is to track them and break chains of infection – as was done for a while in the summer of 2020.

Put simply: the faster testing and isolation is carried out, the more successful containment will be.

“We therefore have to react in an automated way,” said Brockmann: “If the incidence of infection does increase, measures have to be taken immediately.”

Areas where few to no infections occur could then be declared “green zones”, Brockmann suggested. In these areas, people could live their lives with fewer restrictions.

These regions, in turn, would have to be protected from the entry of the virus from “red zones” with a high incidence rate.

How exactly these zones would be defined still has to be clarified, said Brockmann.

Could this really work in Germany?

One big question is – could people in Germany be convinced of a change in strategy? After all, there's no doubt residents have grown tired of the ever-changing measures and shutdowns.

Cornelia Betsch, of the University of Erfurt, has been observing for months how the measures are received and implemented by the population.

She started the project “Covid-19 Snapshot Monitoring” (COSMO), which involves interviewing a representative sample of the population regularly, in March last year.

Since the end of 2020, Betsch said there has been a clear trend that trust in the government is sinking, especially among those who are actually in favour of the measures to protect against the virus.

READ ALSO: How Germany's Covid-19 shutdown has made this winter tougher than most

But a strategy like 'no Covid', where it is clear when measures will be taken or relaxed, could increase people's motivation, suggested Betsch.

There is opposition to these kinds of plans, though. Health Minister Jens Spahn recently said a 'zero-covid' strategy was unrealistic because Germany is not an island.

In the coming days, Michael Hallek and other researchers want to draw up measures available to political decision-makers.

Cities like Münster or Rostock show that the incidence of infection can be kept permanently low, Halleck said. This kind of success should serve as inspiration, he added.

Hallek estimates that the lockdown would have to last four to six weeks for success. By March, the whole of Germany could be a green zone, he said. “We've done it before when we were more determined.”

It remains to be seen how Germany will go forward in the pandemic. More will become clear next week after the meeting with Chancellor Angela Merkel and state leaders.

But one thing is for sure: no-one wants to experience a resurgence of Covid-19 any time soon whenever this shutdown ends.