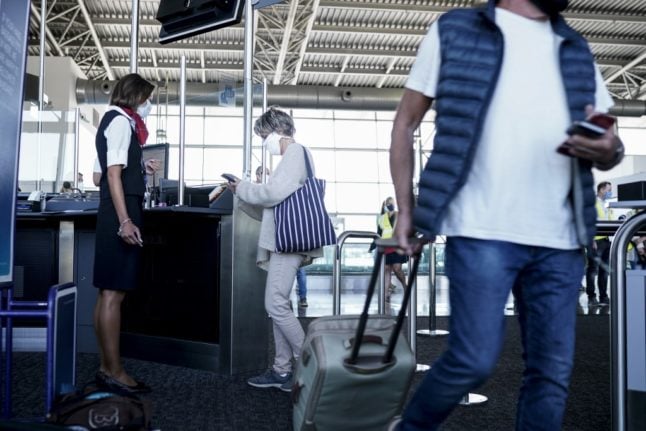 With Covid-19 infection rates rising around Europe the EU has been under pressure to introduce coordinated travel restrictions for those moving within the EU.

“People travelling from dark red zones could be required to do a test before departure, as well as to undergo quarantine after arrival. This is within the European Union,” she said.

According to the commission, the new dark red category is to be introduced to indicate “areas where the virus is circulating at very high levels, including because of more infectious variants of concern”.

The official map has not yet been published but will be created by the European Centre for Disease Prevention and Control (ECDC).

The EU executive is against border closures and instead has suggested tightening the restrictions in regions with an incidence rate of more than 500 infections per 100,000 inhabitants.

“The common map and a common approach to proportionate, non-discriminatory restrictions must still guide our efforts. What we need now in view of the new variants is even more coordination and a joint European effort to discourage non-essential travel. Border closures will not help, common measures will,” said Commissioner for Justice, Didier Reynders.

READ ALSO: These are the current travel restrictions in place around Europe

However by Tuesday January 26th Sweden's incidence rate had dropped below the threshold to 479/ 100,000.

But within certain countries not on that list above, such as Italy and France, there are regions where the infection rates are pushing towards are even over the 500/100,000 threshold set by the Commission.

As well as the dark red zones European countries would also be classified into green, orange, red and grey areas, as they are already in maps produced by the ECDC.

The Commission is also proposing additional safety measures for the EU's external borders.

Travel into the EU is heavily restricted but essential trips are allowed. The Commission proposes that all travellers should undergo testing before departure as well be subject to a period in self-isolation of up to 14 days and further testing.

Additionally international travellers would be required to complete and submit a “passenger-locator” form, used by member states for contact tracing.

Certain groups, such as cross-border workers, transport staff, or people living in border regions, should be exempt from some restrictions, the commission added.

The EU Commission can only make recommendations and it is up to the EU council whether to approve them.

But given borders are governed at a national level many countries within the EU and Schengen area have already taken action to impose these kind of measures.

The question of imposing restrictions on internal borders to fight the spread of more contagious Covid-19 variants has risen to the fore in recent days, pushed mainly by concerns raised by Germany and France.

Germany had proposed temporary and limited bans on all passenger traffic from non-EU countries if necessary, whilst France on Thursday night announced that anyone entering France by air or sea from within the EU must present a negative Covid-19 test. Hauliers and cross-border workers are exempt.

Border restrictions are a matter for individual member states but France and Germany plus EU officials in Brussels have been pushing for a coordinated response after the travel chaos that occurred during the first wave of the pandemic in spring 2020.

HEALTH
WHO warns ‘high’ risk of monkeypox in Europe as it declares health emergency
Url copied to clipboard!