A woman receiving the Covid vaccine in the Pasteur Institute in Paris. Photo: AFP
The Local
[email protected]
@thelocalfrance


When the facts change, I change my opinion, said John Maynard Keynes (or maybe it was Winston Churchill), writes John Lichfield.

This is not a principle applied by French opposition politicians or by the complaining heads on French 24-hour television news or by the British tabloid press. They are still mocking France’s disastrous roll-out of anti-Covid vaccines even though the roll-out is no longer disastrous.

France reached its first 1,000,000 vaccinations on Saturday, eight days ahead of an admittedly unchallenging deadline. It is worth noting, however, that France took only four days more than the UK to reach the million-jab milestone, despite a very slow start.

Three weeks ago I joined the chorus complaining that France’s vaccination programme was calamitously slow. The complaint was, at the time, justified. France managed 700 vaccinations in its first week. In the last 6 days, France has vaccinated more than 600,000 people – one of the fastest rates in Europe.

This is still far behind the British programme, which started 20 days earlier. Britain is now managing nearly 500,000 first vaccinations a day. Good. The UK government took risks in starting early but the risks have been justified – so far.

The vaccine roll-out is almost the only British success of the pandemic. There is much the French and other EU countries can learn from the urgency and flexibility of the British approach.

It should be remembered, however, that the rapid UK programme depends on delaying the second vaccination from the scientifically recommended three or four weeks to 12 weeks. This may yet turn out to be a PR and a medical triumph – or a real-world blunder.

There are still many justifiable complaints about the efficiency of the French programme – unanswered phone lines, local shortages of doses, delayed appointments. Some cities and regions are doing better than others. 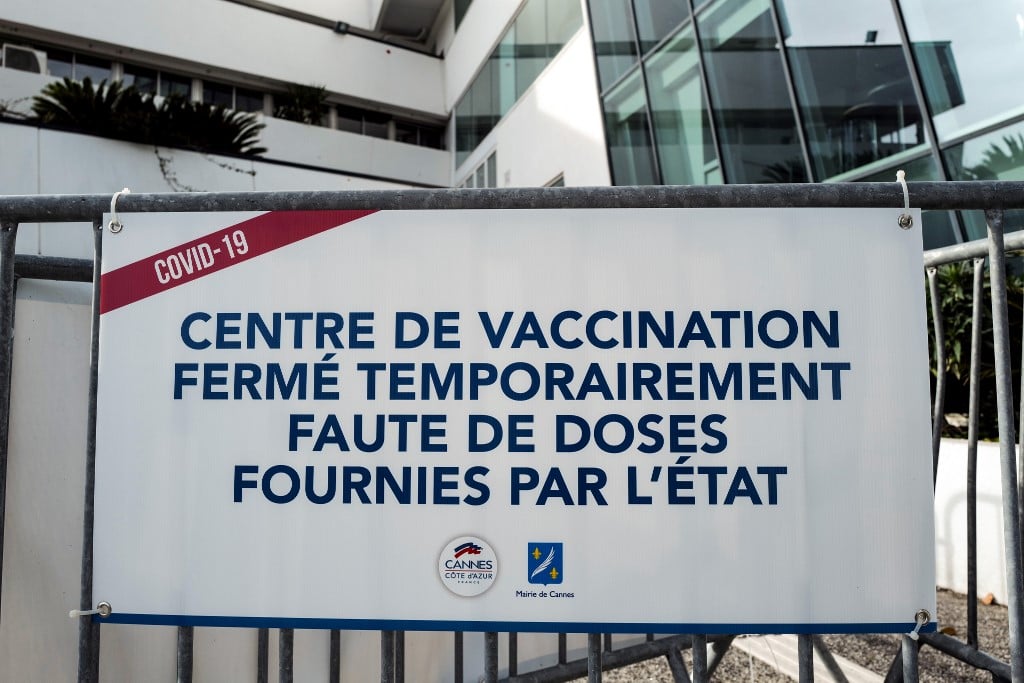 There are still some causes for complaint in France as centres have booked up and some have run out of vaccine doses. Photo: AFP

There are also concerns across Europe about the supply of doses in the next few weeks.

The Oxford-Astrazeneca vaccines will finally be approved by the EU on Thursday and probably by France the next day. That should bring hundreds of thousands of new, more easily distributed doses into play.

However, both Pfizer-BioNTech and Oxford-Astrazeneca have warned that supplies will fall below their promised timeline in February. Some countries are very angry. The French government has one million Pfizer doses in stock. It says that the delays will have little impact on plans to give first vaccinations to at least 100,000 people a day next month.

All the same, the independent health advisory body, the Haute Autorité de santé, has recommended that France copy – or not quite copy – Britain and delay second doses from the recommended 3 or 4 weeks to six weeks (still far short of the UK’s speculative punt on four months).

The French government had already announced that it might elongate the second dose timetable. It has not yet done so. That may now change if supplies of doses start to shrink.

Why was France – and the EU as a whole – so slow off the mark with vaccinations? Some countries – Belgium, the Netherlands – have scarcely begun.

Britain and Israel seized the urgency of the moment and cast caution to the winds. EU countries, perhaps too sensitive to anti-vax opinion, jumped the regulatory hurdles faster than ever before – but not so fast as Britain did.

READ ALSO ANALYSIS How worried does France need to be about its anti-vaxxers?

The over-centralised French state machine was, as ever, ponderous in adapting to a new challenge. The decision to treat care home residents first (with long bureaucratic procedures to ensure their assent) made the first couple of weeks a public relations calamity.

Finally, as ever, the state machine ground into action.

There were plans for 300 vaccination centres; there are now over 1,000. The country is, in fact, one week ahead of the schedule approved unanimously by parliament last October (including the opposition parties who are now complaining.)

Whether this schedule is fast enough is open to question.

This is still far behind the likely time-line in Britain – 6 million first jabs already and 14 million by the end of next month. Does that matter?

Some epidemiologists say that it does. Others say that the second doses are the real finishing-line and that Britain has chosen to put itself two or three months behind other countries in order to speed up the first dose schedule.

All the calculations may, in any case, be smashed if the new Covid variants now appearing (especially the South African and Brazilian versions) turn out to be resistant to existing vaccines.

It is the fear of these variants which is likely to push France into a third lockdown by the end of this week (or maybe the end of next week when school holidays begin).

READ ALSO Lockdown by Wednesday? What to expect in France this week

The current French Covid figures – about 20,000 new cases a day, 2,900 people in intensive care – are not disastrous (compared to Britain or even Germany). They are, however, similar to the figures in late October when the second lockdown was ordered.

In any case, several senior scientific advisers are pressing the government to lock down preventively to slow the circulation of the faster-moving British and other variants. This new blow to the nation’s morale seems to be only a matter of time and may come on Wednesday (with lockdown from Saturday).

Conclusions: France, like all countries, is struggling to cope with an unprecedented and unpredictable global pandemic. Cross-border comparisons and political point-scoring are tedious. Vaccines apart, it is not a game from which Britain emerges well.

After a lamentably slow start, the French government is rolling out vaccines reasonably well – but could do better.