There is, of course, Creamy Bun Feast, but what other weird traditions exist in Sweden? Photo: Jurek Holzer/SvD/TT
Oliver Gee
[email protected]
olivergee23


If you're ever fortunate enough to spend a full year in Sweden, you'd better be prepared for a whole universe of unusual traditions. Podcaster Oliver Gee of The Earful Sweden shares what he considers to be the five most unusual traditions in a Swedish year.

The first time I saw a Swedish “Small Frogs Ceremony” ten years ago, I thought I was being pranked.

What was going on? Feeling like a fool, I joined in, waiting for everyone to start laughing at me. But no one laughed. They just made the sound of a small frog, which was apparently Kouackackack, on repeat.

Fast forward a decade and I'm married to a Swede, I know all the words to the frog song, but I still raise an eyebrow at many Swedish traditions.

Here are my favourite five traditions, all of which are commonly practised among typical Swedes.

As The Local Sweden says, semmeldagen is just another manic bun day. And manic is correct, people go nuts for this sweet and fatty treat. The bun is enormous, about the size of a Big Mac, and impossible to eat without covering your face with whipped cream or powdered sugar. Legend has it that in 1771 King Adolf Fredrik died after eating 14 servings of them for dessert.

How I baked my way through four centuries of Swedish semla tradition https://t.co/0MdDTPEi6i

Most Swedes don't realise how unusual this is, but at Easter they dress their children up as broomstick-riding witches with huge freckles on their faces. Much like at Halloween, these witches collect candy from their neighbours, who've duly put bright feathers on their trees to mark the occasion.

This is my favourite tradition. On Midsummer's Eve, Swedes erect a massive flowery maypole (“erect” is the right choice of words – it's a fertility symbol complete with testicles).

Then, they dance around the pole while imitating small frogs, singing a song called Små Grodorna.

There are more wild traditions on this day, like girls collecting seven different flowers and jumping over seven fences in order to dream of their one true love… but nothing beats the frogs for an eyebrow-raising tradition.

If you thought the frogs were weird, wait till you see a crayfish party.

At a “kräftskiva”, Swedes sit around a table full of boiled crayfish, often while wearing crayfish paraphernalia like bibs and hats. Sometimes you'll get flags with happy moons and crayfish to complete the picture.

Then, everyone slurps down at least 15 crayfish as noisily as possible, interspersed with drinking strong Schnapps and singing what can only be described as a cross between drinking songs and sea shanties. I sing the easiest to learn in the podcast episode below (subscribe!) and a loose translation of the text would be: The whole thing goes, sing yabba dabba do ding dong ding dong (repeated three times with a full shot near the end). 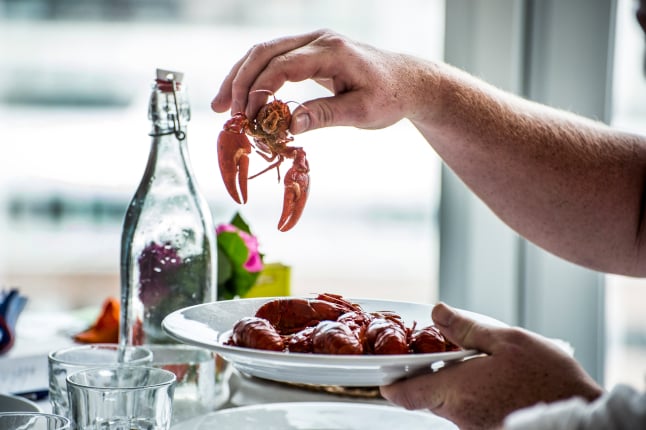 Christmas brings more traditions than all, including my personal favourite: The Donald Duck Hour. Yes, the entire nation sits down at 3pm to watch Disney snippets from the last 70 years.

Favourites include The Bear Necessities, the song from the Jungle Book, but also less universally popular clips like Ferdinand the Bull. The show often features a much anticipated new Disney addition, which in recent years has included Moana, Frozen, and Zootopia.

Oliver Gee runs the new podcast The Earful Sweden. The latest episode features a much deeper dive into these traditions with Oliver's wife, a Swede, defending them all. You can listen to the episode below and follow The Earful Sweden on Instagram here.