"We're not animals but dogs live better than us," sighs Lidia Arribas, who lives without electricity in a vast slum near Madrid where temperatures hit historic lows this week.

Days after its heaviest snowfall in 50 years, Madrid woke on Tuesday to its lowest temperatures in decades, with the mercury plummeting to minus 10 degrees Celsius (14 degrees Fahrenheit).

And the brutal cold has hit particularly hard in Cañada Real Galiana, one of Europe's largest slums, where for months more than half of its nearly 8,000 residents have had no electricity for heating or light.

Police blame the shortage on the illegal cannabis plantations whose lamps, extractors and fans use so much power that they cause widespread electrical outages in the surrounding area.

The crisis posed by the power cuts and the cold snap has been denounced by UN human rights experts, NGOs and Oscar-winning Spanish actress Penelope Cruz.

“I'm really angry with the authorities… everyone passes the buck… nobody does anything,” says Arribas (pictured below), a 37-year-old mother-of-three, torch in hand as she walks back to her home where mildew covers the walls. 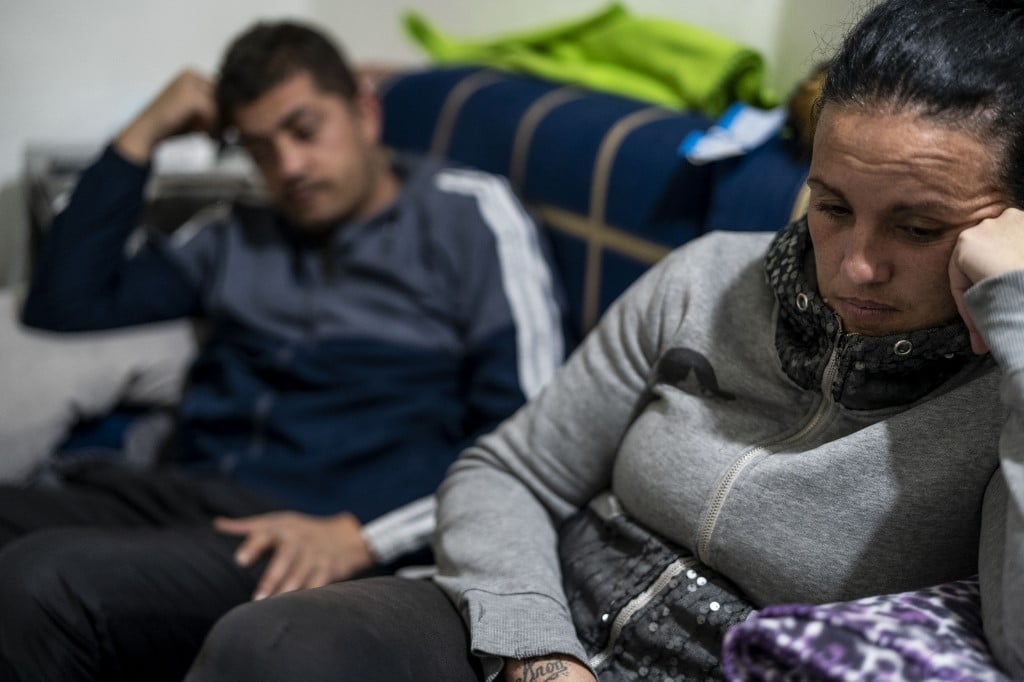 Curled up in a blanket, her seven-year-old daughter Ainara says she always sleeps with her “head under the covers” to protect herself from the cold and the damp.

With no electricity, she and her brother and sister cannot get any of the online homework set by their school, and neither the fridge nor the washing machine are working.

An unofficial settlement built along a 16-kilometre (10-mile) stretch of land flanking the southeastern section of Madrid's M50 ring road, Cañada Real is home to a community largely of Moroccan or gypsy origin who live in extreme
poverty.

Built along a former cattle trail, this sprawling shantytown has existed for decades, with this most recent power cut affecting some 4,000 residents.

Without heating, the brutal freeze has left many struggling to cope.

On Sunday night, a three-year-old girl was taken to hospital “showing signs of hypothermia”, says Conrado Gimenez, head of the Fondacion Madrina NGO which provides residents with food, blankets and gas bottles. 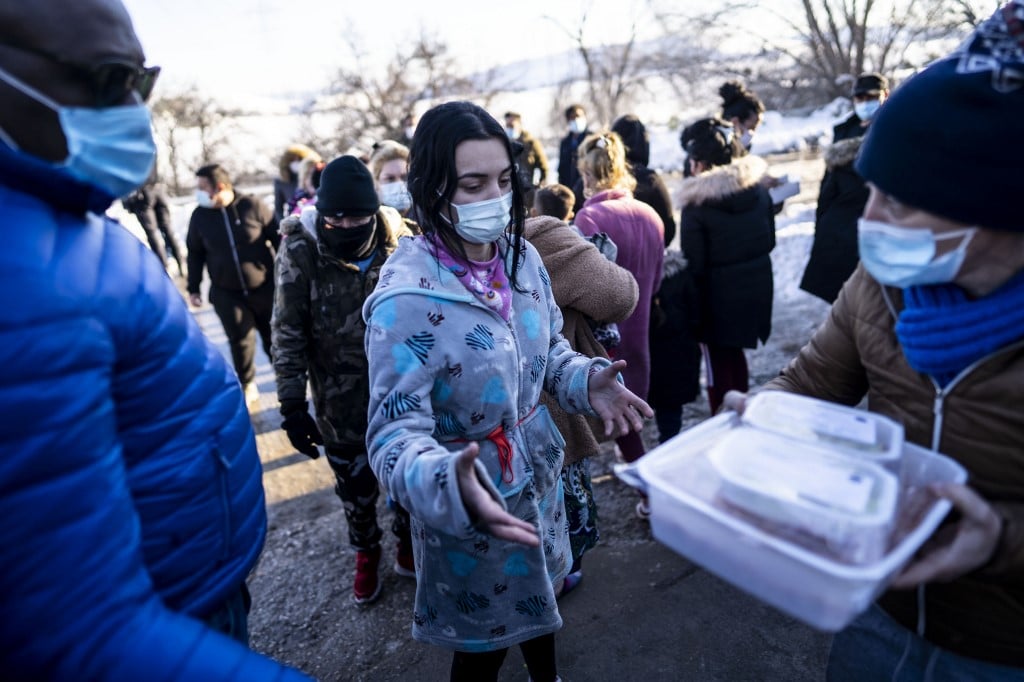 Volunteers of Madrina Foundation hand out food packages during a food and goods distribution in sector 6.

A similar case occurred last month and was flagged by UN human rights experts who warned the power cuts were “endangering the health of some 1,800 children” in Cañada Real.

“Children in Cañada Real Galiana are truly suffering, and their health is at risk,” they said.

“Now that winter is closing in — and especially during the COVID-19 pandemic — electricity must be restored.”

Lidia Arribas' next-door-neighbour Yolanda Martin (pictured below) says she is “more afraid of the cold than of Covid”.

“I get up in the morning and my blankets have frozen, it's pitch dark and I can't have a shower,” says this 47-year-old whose lips are blue with cold. 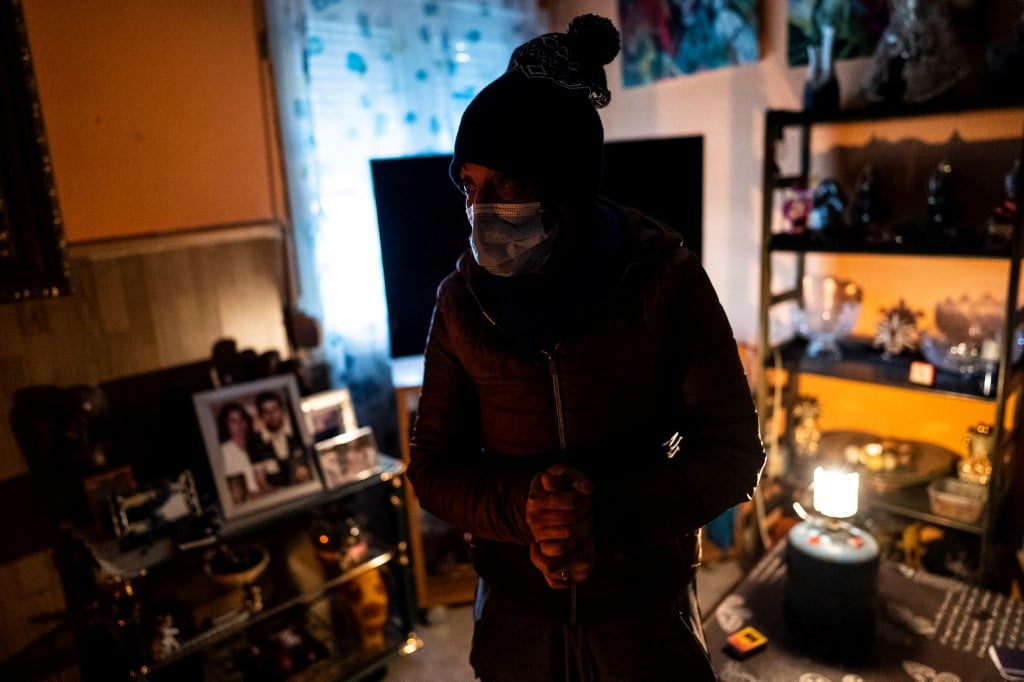 Out of work since May, her only source of heat and light is a chiminea which sits in the middle of her home.

“It will be minus 11C tonight, as cold as hell, but we're surviving with the little firewood we have left,” she told AFP.

“We're breaking tables and stuff that isn't worth much to throw on the fire.”

Two policemen patrolling the area, which is notorious for supplying the capital with drugs, say the power cuts are caused by cannabis farms set up in homes in the area.

This week, Spanish energy giant Naturgy, which supplies free electricity to Cañada Real, began cutting power to several suspect homes in order to get the network back up and running.

Local residents and Pedro del Cura, mayor of Rivas-Vaciamadrid where part of the shantytown is located, are calling for more capacity be given to the network.

They also fear that power could be cut to homes with no links to the drugs trade.

Despite the cold, Arribas is still hopeful they will be reconnected to the grid so she can warm the house for her children, whose only consolation these days is the neighbourhood's running snowball fights.

“We mustn't lose hope,” she says, her eyes downcast.

“Somebody has to listen to us because we can't carry on like this. It's really very hard,” she sighs. “It's very sad.” Weather forecast: What more is in store for Spain this week