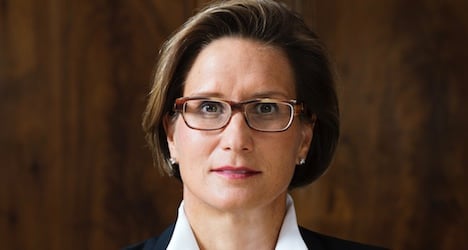 In her first speech since she was appointed to the Swiss National Bank board in July, Maechler said the franc’s value against a basket of currencies of the country’s main trading partners “is still around 15 percent above its long-term average”.

While global economic conditions have improved, “substantial uncertainty remains, causing some investors to seek the relative safety of the Swiss franc”.

The franc is likely to remain under pressure until “investor preferences normalize”, she said.

Maechler said the bank’s decision in January to cut interest rates to minus 0.75 percent for large deposits, plus the SNB’s subsequent interventions in currency markets have prevented the franc from rising even further.

The euro was trading at 1.08585 francs in currency markets on Friday morning, compared to levels below 1.05 before the interest cut was made.

The negative interest rates reduced the appeal of the franc but in times of volatility on financial markets, such as last summer when uncertainties prevailed over Greece’s international bailout programme, demand for Swiss francs can rise, Maechler said.

“This summer, when the Greek government announced a referendum on the international bailout programme, we intervened in the forex market at a time of great market volatility and global uncertainty,” she said.

“This willingness to intervene in the forex market as required is a key pillar of our monetary policy.”

Maechler reminded the audience that the SNB abandoned in January a euro/franc minimum exchange rate of 1.20 previously defended by the bank for more than three years because it was no longer sustainable.

In order to maintain the peg it would have had to buy enormous amounts of foreign currency, potentially impairing the bank’s balance sheet, she said.

Maechler said despite the negative interest rates, Swiss mortgage rates have not fallen to the same extent.

“Fears that the negative interest rate could contribute to imbalances on the mortgage and real estate markets have so far proved unfounded,” she said.

Economic conditions remain “challenging” in Switzerland with GDP likely to grow by around one percent this year, Maechler said.

Negative inflation — to average about minus 1.1 percent this year — should level out next year and should move into “positive terrritory” by 2017.

So the bank does not see prolonged negative inflation “let alone a deflationary spiral”, she said.

Maechler, one of three members of the SNB's governing board,  was born in Geneva but in addition to studies in Switzerland she pursued economics at the University of Toronto in Canada and obtained a PhD in international economics from the University of California at Santa Cruz in 2000.

With experience at the OECD, UNCTAD, WTO and IMF, she was the first woman ever appointed to the SNB's board.