Cambridge Convoy Refugee Action Group, otherwise known as CamCRAG, is a small Cambridgeshire-based charity that was established in response to the migrant crisis in 2015. A small number of people, eager to make a difference, started to travel across the English channel to the Calais refugee camp to help out local aid organisations in the area. The mission soon grew to regular convoys, driving volunteers and donations on Fridays down to France, and taking the group back on Sunday evenings.

This simplicity is the biggest strength of this small organisation. The short volunteer trips and fundraising efforts make volunteering more accessible. Thanks to this, CamCRAG’s volunteer base is among the most varied in the UK. Current volunteer members come from all walks of life, and are aged between 16 to 80. This diversity has been a strength in developing the charity’s various projects. Most importantly, the shared trips to Calais have allowed the volunteers to build friendships between each other, and a strong connection and commitment to the charity itself.

From the moment the volunteers pack themselves in shared cars, they are starting to develop a personal connection to the cause. “That’s where you turn people into long-term activists”, says CamCRAG Chair Elliot Harris.

The volunteers are driven to France and booked a space in a local youth hostel. On the location, the volunteers will assist the locally-based frontline organisations.

Most volunteers will not meet any of the people they’re helping, as they’re working in distribution centres or preparing food, but that doesn’t take away from the experience. These personal experiences of volunteers have also been an important part in spreading the word about the charity and recruiting new members through word of mouth.

Volunteers are a key part of the charity, and that’s why CamCRAG works towards providing easily accessible opportunities to volunteer. The short-term volunteering opportunities have allowed for a wider demographic of volunteers.

“Because normally, how would you be able to go and volunteer in the frontline with a humanitarian organisation and put your life on hold entirely? ” Harris explains the reasoning behind the charity’s operational model. In a similar attempt to remove barriers for volunteering, the charity offers a few subsidised accommodation spots for volunteers on low income or benefits. 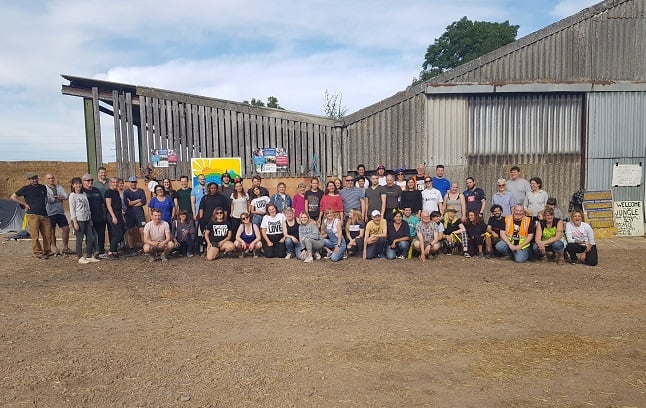 CamCRAG’s volunteers provide a regular boost to the local charities in France. Harris describes the charity as a “kind of a humanitarian über service”.

Before the pandemic restrictions took hold, the charity was typically sending out convoys every six weeks. This consistency and the know-how fostered by the charity benefited the frontline organisations.

Ponchos rather than tents

The grassroots level involvement has allowed room for innovation. Working closely with other aid organisations has given CamCRAG members a chance to see what’s needed and what works on the ground. The charity has developed a speciality in mending tents, thanks to the efforts of one volunteer in particular. In 2019, CamCRAG experimented with a new idea: they collected hundreds of abandoned tents from music festivals, and got together to repair the tents so that they could be distributed to the people in need, labelled, sorted and cleaned.

According to Harris, aid organisations on the frontline often struggle dealing with donations that are in poor condition.

“We’ve got the philosophy that when things get to Calais, everything we give to the local groups has to be really useful for them.” 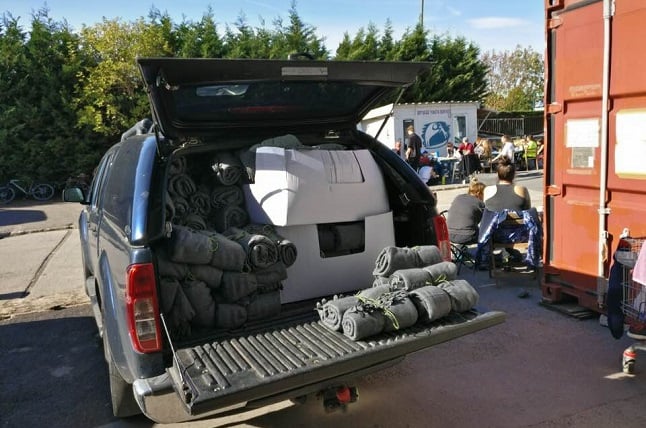 Another project the group developed on the basis of the feedback they got from the aid organisations and refugees themselves are blanket ponchos. The ponchos, unlike blankets, are easier for people to hold onto, and less likely to be confiscated as they are clothing. Ponchos are also easy and cheap for the volunteers to make, so they work for a small charity like CamCRAG.

When the project was first introduced, the charity sent a trial batch and asked for feedback.

“Each time they get distributed, we ask the frontline organisations to report back to us what people think of them.”

Measuring the impact of their work in this way ensures the group is focusing their efforts on meaningful projects and discarding the ones that the recipients find unhelpful. The charity urges its weekend volunteers to speak with NGOs working on the ground, and talk about their experience back home.

“We’re people with a lot of privilege and frankly, this is a hobby for most of us, it’s not life and death for us. So it’s really important that we keep that connection with the people on the front line and the people we are trying to support”, Harris says, “We don’t do things just because it’s nice for us.”

The charity says their small size has allowed them to adapt to changing situations, but the pandemic has proven to be a difficult challenge to tackle. The frequent trips that were at the heart of the charity have been cancelled, and their regular sleepout fundraiser and other activities as well. The trustees are now having to develop new ways to engage with their volunteers.

On the other hand, the situation has forced the charity to collaborate more with other groups. It has resulted in more coordinated efforts to deliver aid to where it’s needed: UK charities have been able to book larger trucks that are able to deliver larger quantities of pallets full of donations to the organisations working on the frontline in places like Greece and France.

“Actually, it’s cheaper… Perhaps this is how we should have done some of our stuff before”, Harris admits, but reinforces how important the convoys have been in helping volunteers understand what they’re working for.

Harris sees this as an opportunity to build a cohesive aid network in the long term: “When the restrictions are finally lifted what you’ll see is a stronger and more integrated aid network.”

The group is keen to develop a more standardized process to their work. “Volunteer doesn’t mean amateur”, Harris says. The logistics of delivering the donations and fundraising will need to respond to the new challenges brought on by the pandemic and Britain’s exit from the EU. 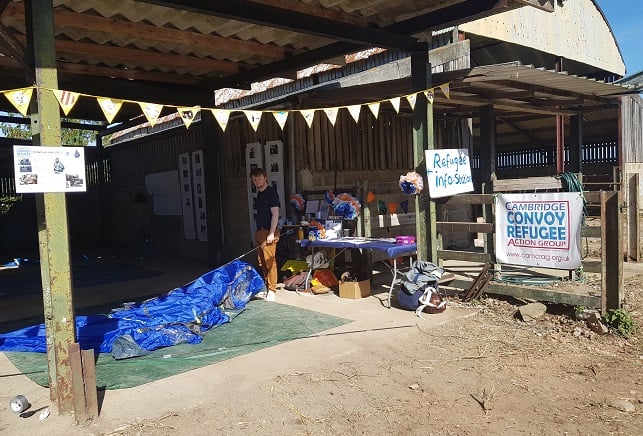 As a small organisation, CamCRAG has managed to establish itself locally. Harris says, however, that the attitudes in the UK towards migrants and asylum seekers have become more hostile over the years. He thinks that rhetoric from the UK media and top-government representatives around “activist lawyers”, has been successful in convincing the public that migration is a threatening issue. In October, the British Prime Minister Boris Johnson was criticised for attacking the integrity of the law profession by calling immigration lawyers “lefty lawyers” and “do-gooders”.

As the charity grows, their focus has expanded from humanitarian aid to policy, and they are campaigning for more long-term solutions to migration. The group is supporting the local refugee resettlement program, in Cambridgeshire. They help new families to settle in the area in a variety of ways, from advocating for their issues to sourcing household items.

Camcrag is also campaigning for the provision of more humanitarian routes for asylum seekers to reach Europe, including improving the chances for family reunification and offering visas on humanitarian grounds. The small charity keeps moving its efforts to where it can be of most help. How a study circle helps new students integrate in Sweden