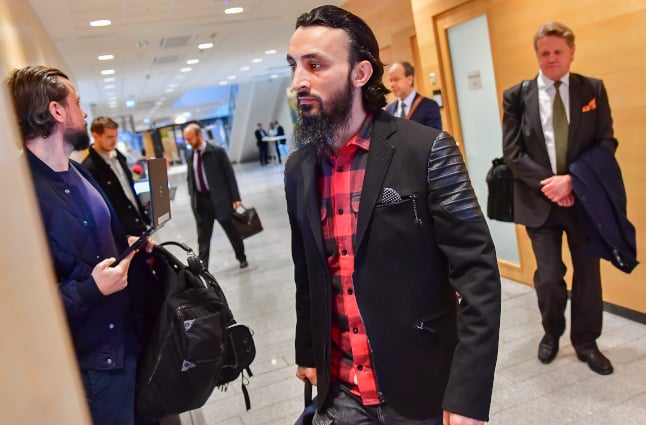 The assault on Tumso Abdurakhmanov took place in his apartment in the Swedish city of Gävle in February 2020, when the accused struck him in the head with a hammer while he was sleeping.

After the attack, Abdurakhmanov posted a video showing the assailant, whom he had apparently overpowered, covered in blood. He also brandished the hammer that he said the assailant used to attack him.

The court found that the assailant's co-defendant, who was convicted of being an accessory, abetted the crime by establishing a relationship with Abdurakhmanov over several months, taking pictures of his apartment and then letting the man into the apartment.

In the trial the man, now 30, admitted to assault but denied any intention to kill Abdurakhmanov. The 33-year-old woman pleaded not guilty.

“The only motive is the one presented by the prosecutor, notably Tumso Abdurakhmanov's criticism against the rulers of Chechnya and the 'blood vendetta' issued by the speaker of the Chechen parliament, Magomed Daudov, against Abdurakhmanov,” the court wrote in its ruling.

It added that it “was clear that a power with significant financial means was behind” the attack, paying travel expenses and a 60,000 euro ($72,000) fee.

Daudov's comments were posted in a video on social media in March 2019 after Abdurakhmanov criticised Chechnya's former president Akhmat Kadyrov, the father of the current leader.

The Gävle district court handed the man a 10-year jail sentence and the woman an eight-year sentence. Both will also be permanently expelled from Sweden after serving their time in prison.

Calling himself President Vladimir Putin's loyal “foot soldier”, Kadyrov has branded members of the Russian opposition “jackals” and “enemies of the people”.

Abdurakhmanov has lived in exile since 2015 after receiving what he describes as threats to his life from Chechnya.

According to Swedish media, Abdurakhmanov has been living in hiding in Sweden since 2019, after being denied asylum in Poland.

His YouTube channel critical of Kadyrov has around 318,000 subscribers.