With the arrival of a new year comes a renewed desire for change. Many of us make resolutions to help us live healthier and smarter lives – and if you live abroad, you may want to discover new aspects of your host nation.

While France is a wonderful country, with a long and proud history, honoured tradition and gregarious, outgoing people, it can take a while to fully grasp all its idiosyncrasies. The language and the cuisine are both enormously rich – but can also be challenging.
Together with HelloFresh, we look at some of the choices you could make in 2021 to embrace French culture. What better time than the arrival of la nouvelle année to make a commitment to becoming more like the French?
Reader offer: save €50 on your first three HelloFresh boxes in France (use the code ‘THELOCAL50’ at checkout)
Learn the language (or master your accent!)
Many languages have their difficulties, and French is no exception. On a basic level, it’s a language that counts by twenty, leading to numbers such as eighty being written as quatre-vingt (‘four twenty)’ and ninety nine as quatre-vingt-dix-neuf (‘four-twenty-ten-nine’). It's a somewhat peculiar system compared to many languages.
Then there are the ‘false friends’ – words that appear similar to English words but have different meanings that can lead to unfortunate misunderstandings. A librarie is not where you borrow books – it’s a bookshop. Nor should you think that a préservatif is something like a jam. It’s actually a condom. Be really careful about that one when ordering toast!
There are hundreds of language apps and courses available for those who wish to improve their French skills. You could also embrace French films and television shows as part of your viewing habits. These present you with language in its natural context, and you'll soon pick up valuable expressions for day-to-day use. Perhaps you're already feeling confident and just want to refine your French accent? Bonne chance!
Get cooking and discover French food
France is widely known as the home of haute cuisine, and many of the worlds finest chefs and restaurateurs hail from the country. If you dream of cooking like the crème de la crème of French gastronomy, you’ve got your work cut out and may feel daunted by the challenge.
However, that doesn’t mean that learning to cook some of the country’s dishes is altogether out of your reach. As the late great Anthony Bourdain, a tireless advocate of French cuisine, said: “Good food is very often, even most often, simple food.” In France, there are countless cooking classes and organizations dedicated to helping you use local ingredients in dazzling, tasty ways.
Perhaps a simpler way that you can truly embrace and enjoy the delights of French cuisine is through HelloFresh meal kits. Each week you’ll receive all the ingredients you need to cook up to five distinct recipes put together by chefs.
Reader offer: get a discount of €50 on your first three HelloFresh boxes (use the code ‘THELOCAL50’ at checkout)
Soon, you could be cooking Filet de poulet et sauce forestière à la moutarde (pictured below) or if you want a vegetarian option, perhaps Velouté de butternut et tartine de bleu d'Auvergne. 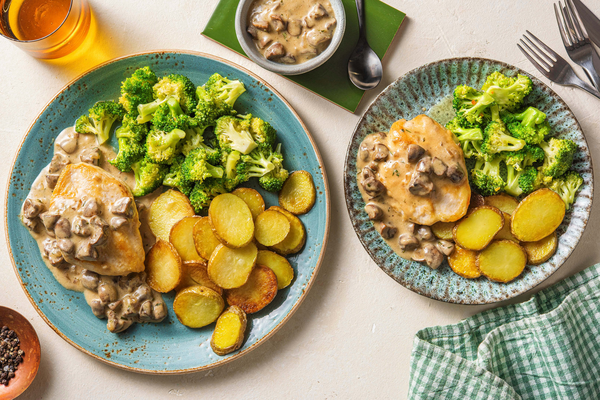 Filet de poulet et sauce forestière à la moutarde. Photo: HelloFresh
Other past HelloFresh French favourites have included Chicken Provence, Steak Frites and French Lentil Salad.
France’s love of food is one reason why it has become so serious about food wastage. Indeed, the country’s revolutionary food waste law has helped to ensure that every day hundreds of dollars worth of good food is donated to NGOs and other organisations to feed the less fortunate. Across the country, primary food producers have instigated various means of ensuring that the majority of food produced ends up on plates.
Want to help cut food waste and the carbon emissions associated with imported food in 2021? Signing up with HelloFresh could be a good place to start. Not only do meal kits reduce waste by providing only exactly what you need, but HelloFresh has also pledged to source local ingredients where it can from across France. This means the fruit, vegetables, meat and diary that you get delivered showcase some of the country’s finest produce.
HelloFresh meal boxes are also easy to dispose of. Designed to be folded when empty, and made out of renewable materials, the meal boxes can be put out for weekly recycling collection. In addition, all separators, paper boxes and plastic bags included can be recycled, meaning almost nothing ends up in landfill.
Plan a trip to one of France’s hidden corners
Sure, everybody typically flocks to the Mediterranean coast in summer and the Alps in winter. But there’s much more to France than sun and skiing. If you’re willing to explore further and perhaps get a little lost, then treasures abound.
Lockdowns and curfew rules mean voyages of discovery in France remain largely off limits. But this could be the time to learn more about the country by doing some research on the treasures you could discover when the time is right.
Take a look at France’s prehistory and the amazing carved Neolithic tomb at Gavrinis, in Brittany, covered in intricate swirls. The delectable flammkuchen of Alsace – a variation on pizza – awaits you around Strasbourg and the pretty city of Colmar. And if you’re a shopper, you could find all sorts of treasures – and tasty treats – around the covered markets of Albi, in Occitane.
In Europe, we're blessed with far more public holidays than most of the world. Once restrictions on movement are lifted and it's safe to travel, this could be the year to discover more of the glories of France.
Keen to start 2021 by enjoying more of what France has to offer? Click here to save €50 on your first three HelloFresh meal boxes in France as a reader of The Local (just use the code ‘THELOCAL50’ at checkout)