Daniel Suhonen at the launch of his Reformisterna group of Social Democrats last year. Photo: Henrik Montgomery/TT
The rhetoric Andersson has been using, both in a long interview in the Dagens Nyheter newspaper, and elsewhere, marks a definite shift in tone for the leadership of the centre-left Social Democrats.
“I think that this marks the end of the era of neoliberalism which was established under Thatcher and Reagan,” Andersson said.
“Going forward, we're going to realise that we need more politics, more collective solutions. My expectation is that the 2020s will be a decade where there is a growing call for collective solutions. This is a paradigm shift.”
The Social Democrats are seeking to frame the high death rate in Swedish elderly care and the shortages of equipment and staff problems faced by healthcare, as the result of tax cuts, privatisation, and under-investment, arguing that this is the chief message to come from the first report of the Coronavirus Commission. 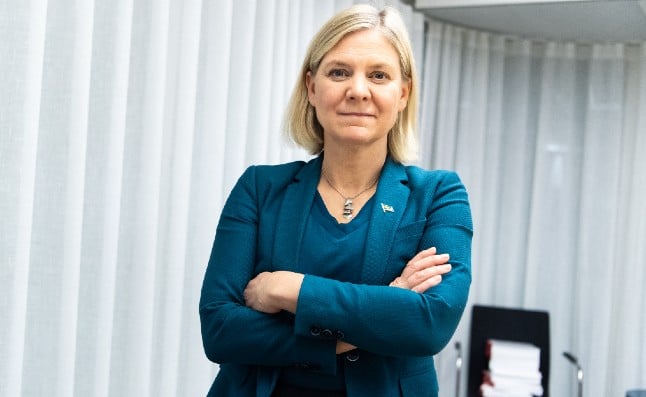 Magdalena Andersson is mooted as a potential future leader for the Social Democrats. Photo: Amir Nabizadeh/TT
READ ALSO: What does the first report from Sweden's coronavirus commission tell us?
For Suhonen, who leads Katalys, a left-wing Social Democrat think tank, this is very welcome.
“She wants to have Socialism a week from now. I'm very happy. She sounds like I have done for the last 15 or 20 years,” he told The Local.
But he complains that Andersson, in her six years as finance minister, had done almost nothing to counter these problems.
“Who is guilty of this? In September 2019, one year ago, she was bragging about how she had saved so much money that we were well prepared for the next crisis.
“But she was only thinking about economic crises. It's a bit of a sad story, because she didn't let the public sector expand when when it could have. We were poor in every sense that mattered in this crisis. We didn't have what we needed to have.”
What worries him, he said, is that while Andersson is ready to hail the shift in public mood against privatisation, and in favour of higher taxes and higher public spending, she has never followed up with any details of what the Social Democrats might do.
“In three to four interviews, almost all on the same theme, she says the public mind has changed: no one's wants more privatisation, people want a stronger society, people would maybe accept rising taxes,” Suhonen complained.
“But she gives no sign that the Social Democrats have those policies. She says, 'the people would like to end privatisation', but she doesn't say, 'we want to end privatisation” .
Are Social Democrats to blame for starving the state of funds?
Suhonen pointed out that almost half of the tax cuts over the past 30 years had been carried out under Social Democrat-led governments.
“During the last 30 years, Sweden has gone from a very clear Social Democratic structure and society, with public monopolies in health care, education and all that, to a very diverse market-oriented neoliberal system,” he said.
“If what what the state took out from the economy was at the same level today as it was in the year 2000, the public sector would have had 300bn Swedish kronor (€30bn) more every year for public spending.”
But centre-right Alliance government which ruled from 2006 to 2014 was responsible, he claimed, for just 160bn kronor of those reductions. The rest of the cuts had been carried out under Social Democrats.
Not a left-wing Social Democrat
Suhonen said his fear was that Andersson was simply positioning herself for a coming campaign to succeed Sweden's current prime minister Stefan Löfven.
“What you're seeing with Magdalena Andersson is that she knows that this critique is coming. She's maybe one of the ones that want to be the new leader on that day that Stefan Löfven resigns.”
“She's not a left-wing Social Democrat. She wants to like, have those kind of words in the history of what she has been saying.”
He said that the situation during the past two years, when the Social Democrats have agreed to weaken labour laws and cut taxes for the richest in return for the support of the Liberal and Centre parties, risked undermining the foundations of democracy.
“It's not the Social Democrats' mission to rule on a neoliberal agenda,” he said. “That destroys how the the political and democratic system works.”
A historic chance
Where he agrees with Andersson, though, is that the Social Democratic party in Sweden do now have a historic chance to seize control of the political narrative, as their counterparts have successfully done in Denmark.
Doing so, however, will require bold political action the party has as yet shown few signs it is willing to take.
“Maybe you can double the number of people that work in elderly care, and maybe you can stop all presentations, maybe you can stop the privatisation of schools,” he said.
“Of course, I know that the Social Democrats don't have a majority in parliament, but for God's sake start doing this!”
“If the liberal parties don't want this, then call a snap election and make it a referendum about the welfare state and privatisation.”