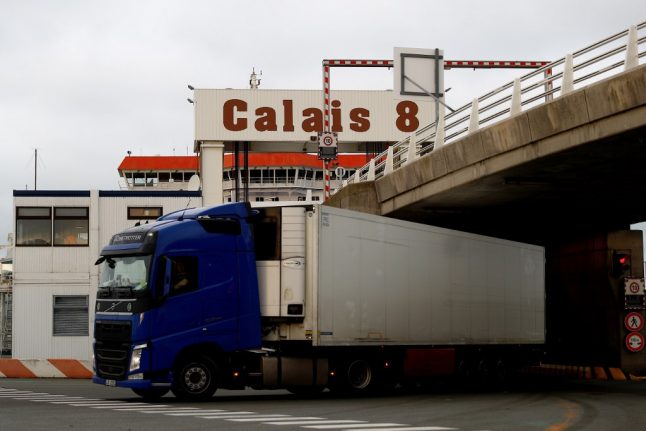 Trucks arrive at the harbour of Calais, after crossing from Britain on January 1, 2021, on the day that Britain leaves the EU single market and customs union. Sameer Al-DOUMY / AFP

Hundreds of lorries had crossed into France and left the country for the United Kingdom through the Channel Tunnel while dozens more were carried on ferries, with no reports of any major hold-ups.

Almost 200 lorries crossed between France and the UK after Britain formally left the EU customs union and single market at midnight, in the final act of its exit from the European Union, operator Getlink said.

“The traffic was strong enough for an exceptional and historic night, everything went well,” a spokesperson for the group told AFP.

“All the trucks completed the formalities” required by the fact Britain is no longer part of the EU customs union. “None of the lorries were sent back,” the spokesperson said.

French officials have insisted that disruption at the frontier in Calais in northern France is being minimised by a so-called “smart border”.

Hauliers are required to enter information about their freight online in advance with only a rapid scan needed at the border.

Once this is done the trucks can either be waved through with a green light or subjected to extra checks if given an orange one.

Officials say that British businesses have stockpiled for January, which is also a relatively quiet month with little activity after Christmas.

The first vehicle to pass through heading for Britain was a heavy goods vehicle from Romania carrying post and parcels, which was symbolically given the go-ahead by Calais mayor Natacha Bouchart.

Bouchart, who pressed the button allowing the lorry to leave, said it was an “historic moment” adding that going back to customs checks after the UK's near half century of EU membership “will have consequences whose range we don't yet know”.

There had been immense bottlenecks of traffic after France briefly closed the border in late December when a new coronavirus variant was found in Britain.

But with all drivers coming in now taking tests before entering France, the backlog was cleared just in time for the completion of Brexit.

The first to submit to a check on entering France was a lorry driven by Ukrainian Viktor who smiled and noted that “colleagues from England said 'congratulations' to me, because I'm the first driver”.

Of the 36 trucks disembarking from the Pride of Kent, which left from the British port of Dover, three were told to stop for additional checks, an AFP correspondent said.

Calais port president Jean-Marc Puissesseau said on Thursday that officials were relaxed about the new arrangements after carrying out dry runs and investing 13 million euros ($15.6 million).

“We regret Brexit, but we don't fear it… We are at ease because for three years now we have been able to perfect everything we've prepared,” Puissesseau said.

Some 70 percent of trade between Britain and the EU passes through the French ports of Calais and Dunkirk. On average, 60,000 passengers and 12,000 trucks pass through daily.