People dance during a party near a disused hangar in Lieuron on January 1, 2021. JEAN-FRANCOIS MONIER / AFP
AFP
[email protected]
@thelocalfrance


Some 2,500 partygoers attended an illegal New Year rave in northwestern France, violently clashing with police who failed to stop it and sparking concern the underground event could spread the coronavirus, authorities said on Friday.

The revellers had set up the illegal rave in Lieuron, south of Rennes in Brittany, after skirmishes with police, said a statement from the local prefecture. Many were still on the site Friday as a sanitary cordon was thrown up around it.
Local gendarmes tried to “prevent this event but faced fierce hostility from many partygoers” who set one of their cars of fire and threw bottles and stones, the statement said.
Those present had come from across France and even abroad, it said.
By Friday evening, the sound of techno music could still be heard from the party venue, though police were preventing any newcomers from joining the rave, according to an AFP photographer.
“Police controls are taking place around the site. Verbal warnings are being given to everyone leaving,” the police said on social media.
Speaking later on BFM TV, interior ministry spokeswoman Camille Chaize said there had been “great hostility, great violence” against the forces of law and order, without indicating when the police would be able enter the rave site.
Such mass gatherings are strictly prohibited across France to prevent the spread of Covid-19, and a nationwide 8:00 pm curfew — which was not lifted for New Year — applies across the country.

Reports said that the rave party took place in an empty warehouse belonging to a storage company.

Prosecutors have opened an investigation into the illegal organisation of a musical gathering and premeditated violence against persons in authority.

Vehicles registered from all over France were still parked at the site on Friday and many revellers were present as techno music thudded away, an AFP journalist said. 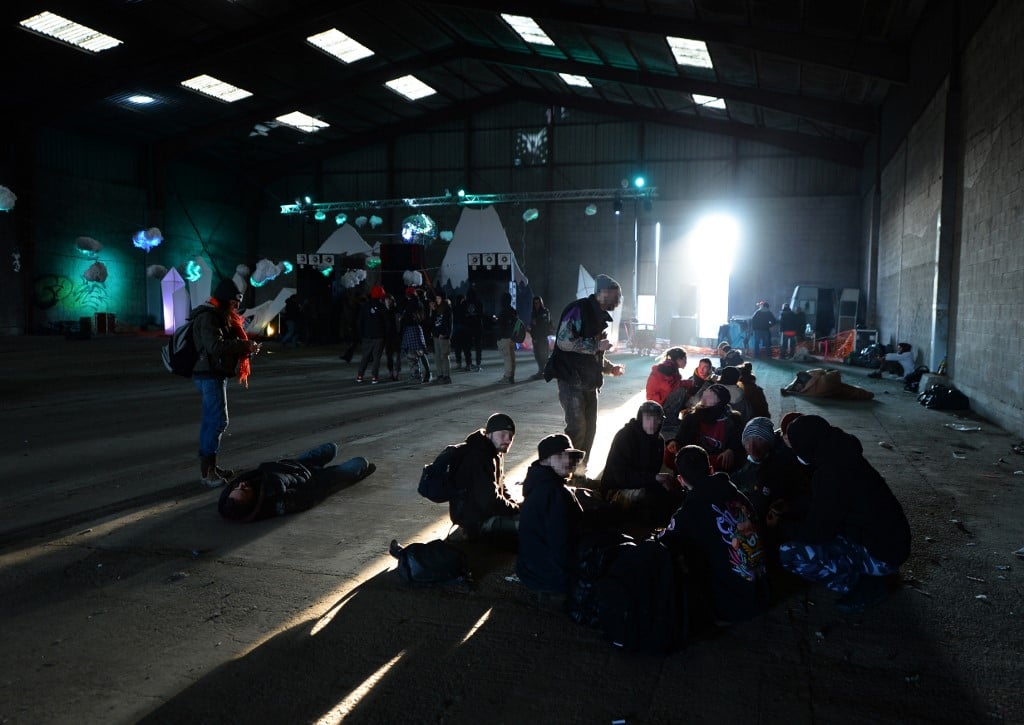 People wait after dancing during a party in a disused hangar in Lieuron about 40km (around 24 miles) on south of Rennes, on January 1, 2021. JEAN-FRANCOIS MONIER / AFP

Participants interviewed by AFP said that the revellers had included partygoers from foreign countries, including Spain and Britain.

One participant, who gave his name as Jo from the Alsace region of eastern France and refused to be identified further, said they had all met at  a meeting point on Thursday evening in the parking lot of a shopping centre.

Then the convoy headed for Lieuron where the police tried to prevent them from passing, he said.

He acknowledged that “very few had respected social distancing” at the event, which was supposed only to end later on Saturday.

French authorities have been particularly concerned about mass wildcat rave parties throughout the pandemic but New Year's night was a particular concern.

In the southern city of Marseille, security forces halted an illegal party grouping some 300 people, police said. Over 150 people were warned and the three suspected organisers have been arrested.

Interior Minister Gerald Darmanin said that 132,000 police had been deployed across France for the New Year celebrations to ensure security and that the curfew was respected.

Darmanin said on Twitter on Friday that he was working with local officials in the evening “on re-establishing a normal situation” while keeping people safe.