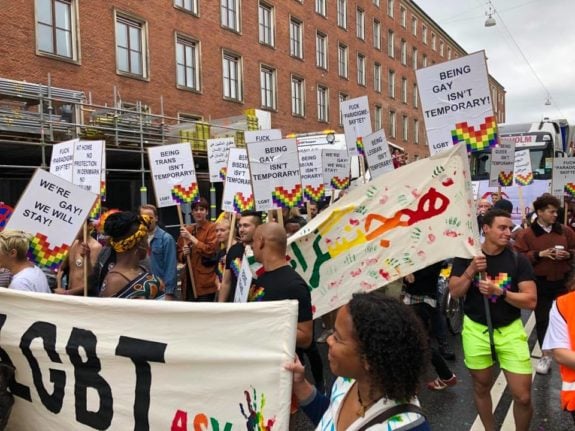 At the Copenhagen Pride Parade. Photo courtesy of LGBT Asylum

LGBT Asylum is an NGO whose aim is to offer support and counselling for LGBT+ asylum applicants in Denmark.

It was formed in 2012, when the country allowed LGBT+ people to ask for asylum under the UN Refugee Convention, which states that asylum may be granted to a person who has a well-founded fear of being persecuted for reasons of race, religion, nationality, political opinion, or membership of a particular social group. From that year, this last “group” may be made up of LGBT+ people.

This means that they are now granted for international rights of refugees and Denmark has the legal obligation to protect them – as long as their case is accepted. Since then LGBT Asylum has offered support through the application process to over 400 people from Uganda, Zambia, Iran, Iraq, Afghanistan, Syria, Indonesia, Colombia, Russia, and many other countries where people face persecution for their sexual orientation or identity.

Yet actually getting asylum in Denmark is an arduous process. It involves many and long meetings with various Danish authorities, most notably the police and immigration service, who are not necessarily prepared for the particular vulnerability of the people they interview. This process requires the asylum seeker to prove his or her sexual orientation to the authorities. For many, talking about their sexuality with another person was often a reason for persecution, torture, or risk of death, and now they must submit to hours of questions that they may never have answered openly before.

That’s where LGBT Asylum comes in. They are a group of 35 volunteers whose purpose is to support LGBT+ applicants in the asylum process, as well as in their integration into Danish society. Despite receiving an introductory training about regulations and laws, its members are not necessarily experts in the legal, psychological or social issues that comprise this process, but they do have the will to give guidance and share their experiences to those who start out on this challenging path.

“Mainly they prepare you emotionally and technically. They tell you how the process is going to be, they advise you to make a good application, they tell you what kind of questions they can ask you, how long it could be, etc. It certainly would have been a lot more difficult without them or it might not have been possible,“ says Nicholas Chisha, who had to leave Zambia as he could have suffered penalties of up to 14 years in prison for his sexual orientation.

He applied for asylum in early 2017, but says he was initially rejected simply because the immigration authorities didn't believe he was gay. After two years of appealing his case with lawyers involved, he was ultimately granted refugee status in Denmark.

While Denmark represents freedom to live the way they want, the living conditions people face as asylum applicants are limiting. “It can take a year to several years to get permanent residence as a refugee,” explains María Kortenbach, volunteer and spokesperson at LGBT Asylum. Meanwhile, applicants are assigned to an asylum centre. In most cases, these centres are located in areas far away from cities.

“It’s not itself bad, but as a queer person and especially if you are a refugee, to be located in a place that doesn't have a queer community make it also very vulnerable. The isolation that people face when they are there is hard,” Kortenbach points out.

In the centres, they live closely together with other asylum applicants in small rooms and may be afraid of openly expressing their sexuality due to fear of harassment or negative reactions. That’s why one of the main goals of the organization is to provide counselling and support in the integration phase. “Without them, we would not find the social and emotional support we need in these types of communities,“ highlights Chisha. An applicant whose request for asylum was granted on appeal celebrates with one of the group's volunteers. Photo courtesy of LGBT Asylum

The organization is always open to new volunteers, but they ask for two main conditions: long-term commitment and to “have experiences on your own body about being LGBT+ person (this means that straight cis-persons cannot be volunteers in LGBT Asylum),” as they underscore on their website.

“An important element is that counselling and togetherness take place from queer to queer: even though we all came from different circumstances, we all have this thing in common which makes it a little bit easier to talk about [these] very intimate and private things, as it is your sexual orientation and identity,“ stresses Kortenbach.

Additionally, they are focused on attracting translators to the group, since there are several asylum seekers who speak neither English nor Danish and that's essential in the application process.

Apart from the support in the asylum process, the organization also seeks to bring a sense of belonging and networking. They run meetings in Copenhagen every month, which creates the opportunity to meet other LGBT+ people who are in the same situation.

“Every month we have a Saturday meeting, with different themes every time. For example, we go together to the MIX Film festival. Last month we had a Saturday meeting with AIDS Foundation where we had one of their expert talking about sexual health for queer people, which is something that not everyone knows about and they don’t usually teach in school,” says Kortenbach.

Asylum seekers usually contact them by phone or email, and then they arrange a face-to-face meeting at their community centre in Copenhagen or Aarhus. “Over 400 hundred people have contacted us since 2012,” stresses Kortenbach.

Asylum applicants reach them through posters or flyers set up in regular asylum centres, as well as word of mouth between the LGBT+ community. However, they also recognize that it would be helpful to have broader involvement.

“The community, in general, does not know our work and we could also reach more people who need it,“ says Nicholas, who has become a volunteer and active member of the organization.

Martina Olivier Foti is a digital producer and freelance journalist based in Copenhagen. 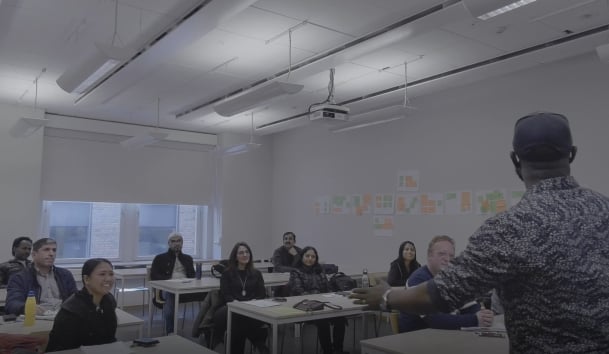