Denmark has repeatedly broken its highest ever daily coronavirus case total this week and posted over 4,500 cases on Friday. What's going on?

During the first coronavirus wave, Denmark was largely praised for keeping its number of Covid-19 deaths and cases low relative to other countries, and for being able to end its lockdown relatively early, notably with the reopening of schools.

However, little more than a week after a partial lockdown was introduced in an effort to curb increasing cases, the country is tightening measures further as it grapples a sharp uptick in new Covid-19 infections.

Denmark again reported a record number of new cases of the coronavirus on Friday, as it has done regularly in recent days. Thursday’s total exceeded 4,000 cases in a day for the first time, with 4,034 cases detected from 124,707 tests. On Friday, 4,508 cases were registered from 141,172 tests.

The number of hospitalised Covid-19 patients increased on Friday by 52 to 568, exceeding for the first time the peak hospitalisation total from the spring wave of the virus, which stood at 535 on April 1st.

With Friday’s update, the total number of coronavirus deaths in Denmark surpassed 1,000. The current total is 1,007.

But why the sharp increase in cases?

The explosion in cases in Denmark has come later than in many other European countries, many have which have had lockdowns or other forms of tight restriction in place earlier in the winter or autumn. 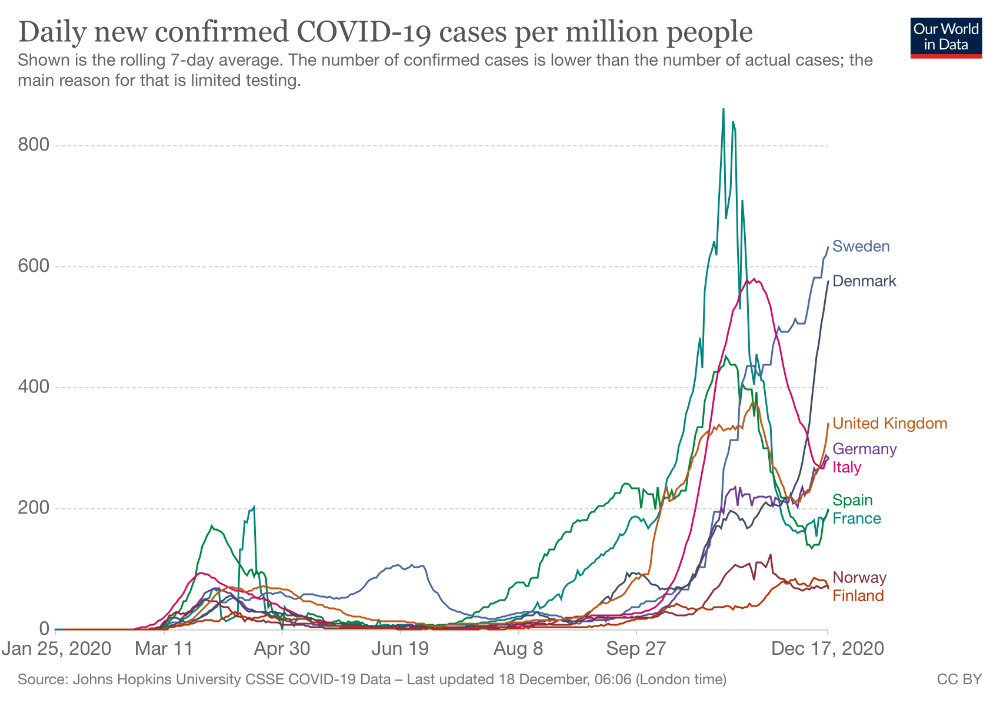 Graph: Our World in Data

There is evidence to suggest that Danish health authorities should have responded earlier with interventions to slow its emerging second wave, despite restrictions introduced in late October which appeared for several weeks to be keeping the situation in check, keeping case numbers relatively stable albeit markedly higher than in the summer.

At least two experts have said they believe the Danish government broke with the cautious approach to which it adhered at the outset of the pandemic, resulting in the serious nature of the current situation.

“The government has acted too late. It’s not because the virus is out of control yet, but if Denmark had been closed down earlier, that would have taken the edge of the infection spread and made the situation more tolerable. Now were are fighting with an accelerating epidemic at the same time people want to celebrate Christmas,” Jan Pravsgaard, a professor of immunology at the University of Copenhagen, told Dagbladet Information on Friday.

Additionally, the lockdown announced on Wednesday – which takes full effect on Christmas day and involves the closure of all non-essential retail stores – may not be far-reaching enough, according to the professor.

“Zealand and Copenhagen are hardest-hit by corona at the moment, and there’s a risk that Zealanders will take the infection with them if they go to Jutland for Christmas, as it appears many are planning to do. It would have made sense to close the Great Belt [bridge connecting the eastern and western parts of Denmark, ed.], even though that would be unpopular,” Pravsgaard told Information.

The Danish Health Authority has no plans at the current time to recommend travel restrictions within Denmark, the authority's director Søren Brostrøm said at a briefing on Wednesday.

“That is not because we are not worried, but because we have very clear and precise recommendations with regard to social contact,” Brostrøm said.

Those recommendations are to see a maximum of 10 people socially at any one time, and not to have any form of social contact with more than 10 people.

What else could have been done?

Another researcher said that the ‘partial lockdown’ restrictions announced on December 7th and effective from December 9th in parts of the country – and now overtaken by the national lockdown – came too late, and should have been put in place around two weeks earlier.

“Partly because we wouldn’t then have had so many sick people right up to Christmas – when many people will gather – it would have been good to have a larger buffer in relation to the capacity at hospitals,” Viggo Andreasen, a mathematical epidemiologist at Roskilde University, told Information.

Andreasen also said that even though authorities waited until December 9th, they may have lost further ground by implanting a partial lockdown rather than further-reaching restrictions to close down all social activity.

“That would certainly been the most sensible action to avoid the pressure we are seeing on hospitals approaching Christmas,” he said.

It should be noted that Denmark has significantly increased the number of tests conducted daily compared to average numbers from the autumn, as reflected by current lags in waiting times for tests in some locations.

However, Prime Minister Mette Frederiksen, when she announced the Christmas lockdown on Wednesday, called the current coronavirus situation “very serious”, adding that just under half of Denmark's Covid-19 hospital beds were in use.

17 deaths with Covid-19 were registered on Thursday, the highest daily figure since the spring outbreak. Friday saw a further 15 deaths.

Pravsgaard told Information that, had Denmark reacted with lockdown-type restrictions when daily cases reached 800-1,000, as they did in late October, it may have passed the peak of the current infections curve by now – as has been the case in other European countries, including France, Italy and Spain, so far in late 2020.

“In those countries the consequences were taken and things were closed somewhat earlier, even though it resulted in demonstrations and discontent. Not just because of Christmas, but also because infection numbers have been increasing so fast. We should probably have done the same thing in Denmark instead of waiting until just before Christmas,” he said.