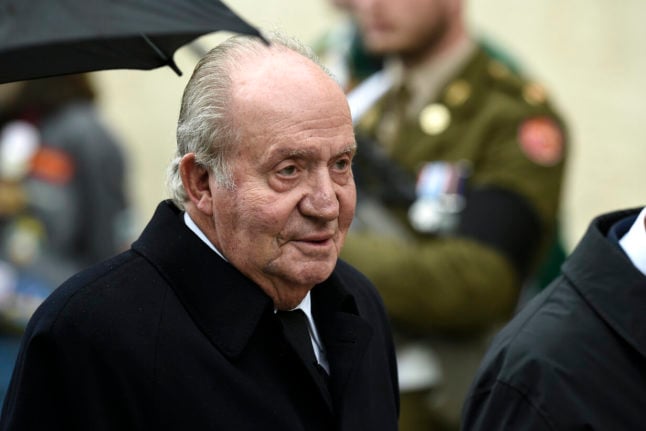 The voluntary declaration was presented by his lawyer with sources telling the paper the move was in connection with an ongoing anti-graft investigation looking into his credit card use.

The legal probe was confirmed last month Spain's attorney general, with judicial sources telling AFP at the time they were looking at whether the former king used cards linked to accounts not registered in his name — which could constitute a possible money-laundering offence.

They said investigators were looking into funds deposited in at several Spanish bank accounts held by a Mexican business and a Spanish Air Force official, and whether they had been accessed by the former monarch.

Prosecutors had sent legal requests abroad to determine whether the monies deposited in the accounts had been hidden from the tax authorities.

If proven, the allegations could constitute a money laundering offence for which he could be prosecuted given that the movement of funds and use of the credit cards occurred after his abdication in June 2014.

A spokesman for the Spanish tax office could not confirm or deny the El Pais report about the voluntary declaration, saying for legal reasons the agency could not comment on specific cases.

There was no response from the attorney's law firm.

El Pais said the treasury was analysing the document and would decide in the coming days whether it needed more information and what action to take.

The move came four months after the former head of state, who is also facing two other investigations into his finances, fled into self-imposed exile in the United Arab Emirates.

The first was opened two years ago with prosecutors examining a Saudi high-speed rail contract that was won by a consortium of Spanish companies in 2011, seeking to establish whether the then-monarch was paid a commission.

According to Swiss daily La Tribune, Saudi's late king Abdullah deposited $100 million into a Swiss private bank in 2008 to which Juan Carlos I had access, prompting suspicions it was a kickback for the contract which was awarded three years later.

The inquiry was triggered following revelations by the octagenarian's former mistress Corinna Larsen, with investigators in Spain and Switzerland now looking into his finances.

MUST READ: Everything you need to know about Spain's Christmas lottery