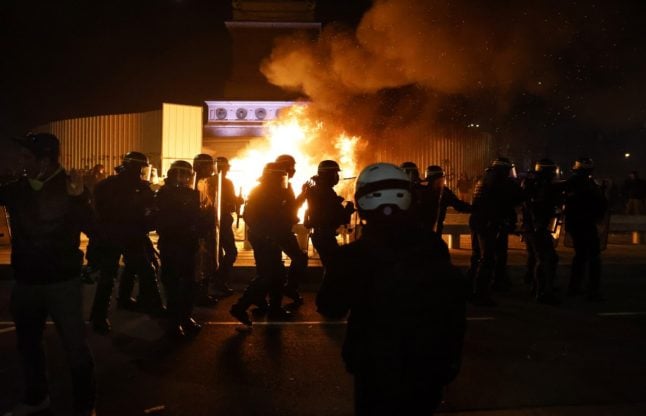 Violent clashes erupted in Paris Saturday as tens of thousands took to the streets to protest against new security legislation, with tensions intensified by the police beating and racial abuse of a black music producer that shocked France.

Several fires were started in Paris, sending acrid smoke into the air, as protesters vented their anger against the security law which would restrict the publication of police officers' faces.

A press freedom group has denounced the “unacceptable” injury of an award-winning Syrian photojournalist during a Paris protest against police brutality while France's interior ministry said 62 police officers were injured and 81 people arrested during the nationwide protests.

In AFP photos Alhalbi's face appears bruised with much of his head covered in bandages. A firefighter carries on a stretcher Syrian freelance photographer Ameer Al Halbi who was injured during clashes in a demonstration against the 'global security' draft law, restricting sharing images of officers.
Gabrielle Cézard / AFP

Christophe Deloire, secretary general of Reporters Without Borders, tweeted that the 24-year-old had been wounded at Place de la Bastille by “a police baton” and condemned the violence.

“Ameer came from #Syria to #France to take refuge, like several other Syrian journalists. The land of human rights should not threaten them, but protect them,” he said in a second tweet.

Deloire also noted Alhalbi had been clearly identified as a journalist.

Dimitri Beck, director of photography for Polka, said that Alhalbi had suffered a broken nose and injured forehead, and had been taken to hospital.

A statement from Polka magazine also condemned the “police aggression” against Alhalbi. The magazine's Director of Publication Alain Genestar said the incident was “all the more shocking and reprehensible” because he was clearly identified as a press photographer.

Phil Chetwynd, AFP's global news director has urged the police to investigate. “We are shocked by the injuries suffered by our colleague Ameer al-Halbi and condemn the unprovoked violence,”

“We demand the police investigate this serious incident and ensure all journalists are allowed to carry out their work without fear or restrictions,” said Chetwynd.

Alhalbi has won several international awards, including second prize in the “Spot News” category for the World Press Photo in 2017, mainly for his coverage of the Syrian conflict in his home city Aleppo for AFP.

Police said on Sunday that two demonstrators had complained of being hurt by officers in protests outside Paris, while no count had yet been made in the capital itself.

Some 62 police officers were injured during the Saturday demonstrations, the interior ministry said, while 81 people were arrested. A French riot police officer lies on the ground after falling during a demonstration against the 'global security' draft law, which Article 24 would criminalise the publication of images of on-duty police officers with the intent of harming their 'physical or psychological integrity', in Paris, on November 28, 2020.  THOMAS COEX / AFP EXPLAINED: The new French law that restricts photos and videos of police officers