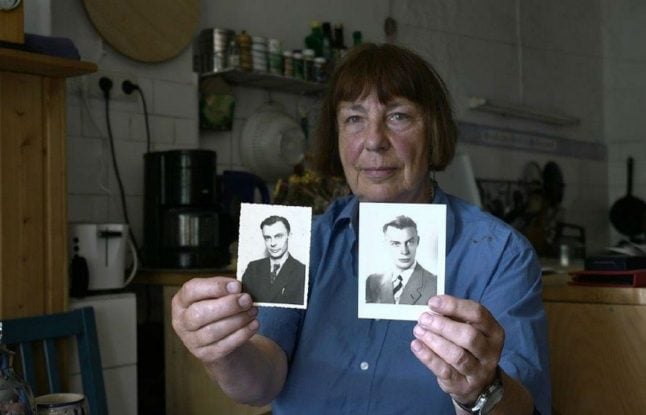 Brix shows photos of her father in August 2019. Photo: DPA

“I didn't meet my father until I was six years old. When he came back from the war, he had lost both his legs,” Brix, a 79-year-old German pensioner, told AFP.

“He read Tolstoy, Dickens to me… He was kind of my spiritual mentor,” said the retired history teacher in her small apartment in an alternative district of Hamburg.

“My father didn't talk about it and I didn't ask any questions, not even this simple question: 'Dad, how did you lose your legs?'” said Brix.

After the 1950s, marked in West Germany by the strong desire to leave the past behind, the 1960s saw a tentative dialogue begin in many families, with young people demanding explanations from their parents.

Brix also mustered the courage to ask questions but did not get straight answers.

She continued to believe that her father only worked as a doctor for the Wehrmacht, Germany's regular wartime army.

It was long after her father's death in 1980 that a corner of the veil over his past lifted.

“It was just before I retired in 2006,” Brix recalled, her throat tight with emotion.

“A historian friend, who was researching the Nazis in the Baltics, asked me, 'Barbara, did you know that your father was a member of the Einsatzgruppen?' It was naturally a shock,” she said.

Brix knew only bits of her father's biography: Peter Kröger, a native of Latvia's German minority, joined the Nazi party in 1933 at the age of 21.

Having become a doctor, Kröger entered the party's military branch, the Waffen-SS, and in June 1941, when Adolf Hitler launched the invasion of the Soviet Union, he left his pregnant wife alone to go to the Eastern front.

The Nuremberg trials of top Nazis, whose 75th anniversary Germany is commemorating this year, marked the country's first broad social reckoning with the war and its crimes.

But most of those responsible for atrocities were never prosecuted in a West Germany at the forefront of the Cold War, the Allies being more concerned about the Soviet threat than past abominations.

Kröger was questioned as a witness several times in the 1960s, without ever being personally worried about facing consequences, Brix learned from Germany's Central Office for the Investigation of Nazi Crimes.

In coloured filing cabinets, she has stored the documents collected over the years, notably from the federal archives, on Dr Kröger: a certificate of belonging to the SS, stamped with the eagle and the Nazi swastika, a certificate of “denazification”, which allowed him to continue his profession. In one photo, her father poses in the black uniform of the SS.

The Nazi death squads he joined were deployed in the wake of the German troops invading the vast territory of the Soviet Union.

Four Einsatzgruppen or “task forces” alone would annihilate some 1.5 million Jews, even before the construction of the extermination camps in occupied Poland.

The first pogroms committed by Baltic and Ukrainian auxiliaries, supervised by the SS, shot groups of men, women and children and buried them in giant pits.

Brix has tried to trace the genocidal journey of Einsatzgruppe C and find out if her own father may have participated in atrocities.

“He must have known about the persecution (of Jews), but I could not imagine that my father, a doctor, could have been present at a mass killing.”

It took a Dutch journalist researching Reinhard Heydrich, one of the architects of the Holocaust, to shed more light.

“He pulled a document in English from his briefcase. Then I saw my father's full name,” Brix said.

“This was the testimony of the commander of Commando 5 of the Einsatzgruppe C, who recounted the first large mass killing in Kiev.

READ ALSO: 70 years on: When the first Nazis were tried

“The commander said he tried to refuse to take part but it was impossible. So he said he called the doctor, my father, to make sure that everything would happen in a 'hygienic' and orderly way,” Brix added.

This was how she received the “first proof” that her father attended at least one mass killing.

Brix also knows that her father was present in Kiev during the Babi Yar ravine massacre.

More than 33,000 Jews were executed September 29-30, 1941 in the Ukrainian capital in what many historians call the largest single bloodbath of the Holocaust.

However she is unsure if he was at the scene of the crime.

The former teacher has in her twilight years intensified her research on World War II.

She is active in Germany's “remembrance culture” in which the past is explored as a means of atoning for past crimes and teaching younger generations to learn history's dark lessons.

Brix is also part of a Franco-German association that brings together the descendants of Nazis and resistance fighters to do outreach in schools in the two countries.

In the 600-page collection of findings entitled “State Security in the Cold War”, historian Friedrich Kiessling and legal scholar Christoph Safferling focused on the period from the early 1950s until 1974.

Their research found that between 1953 and 1959, around three in four top officials at the federal prosecutor’s office, which commissioned the report, had belonged to the Nazi party.

More than 80 percent had worked in Adolf Hitler’s justice apparatus, and it would take until 1972 before they were no longer in the majority.

“On the face of it they were highly competent lawyers… but that came against the backdrop of the death sentences and race laws in which they were involved,” said Margaretha Sudhof, state secretary at the justice ministry, unveiling the report.

“These are disturbing contradictions to which our country has long remained blind.”

It was not until 1992, two years after Germany’s national reunification, that the last prosecutor with a fascist background left the office.

“There was no break, let alone a conscious break, with the Nazi past” at the federal prosecutor’s office, the authors concluded, stressing “the great and long continuity” of the functions held and “the high number” of officials involved in Hitler’s regime.

Chief federal prosecutor Peter Frank commissioned the study in 2017. The federal prosecutor’s office is one of Germany’s most powerful institutions, handling the most serious national security cases including those involving terrorism and espionage.

With more than 100 prosecutors, it is “the central actor in the fight against terror,” the report authors said, underlining its growing role in the decades since the September 11th, 2001 attacks in the United States.

The researchers were given unfettered access to hundreds of files labelled classified after the war, and found that rooting out alleged communists was often prioritised over other threats, including from the far right.

“In the 1950s the federal prosecutor’s office had a combat mission – not a legal but a political one: to pursue all the communists in the country,” the daily Süddeutsche Zeitung said in a summary of the report.

The fact that West Germany widely used former officials from the Nazi regime in its post-war administration had long been known.

For example, Hans Globke served as chief of staff and a trusted confidant to former conservative West German chancellor Konrad Adenauer between 1953 and 1963 and was responsible for recruitment to top posts.

However, Globke had also been a senior civil servant in the Nazi-era interior ministry and was involved in the drafting of the 1935 Nuremberg race laws that imposed the first dramatic restrictions on Jews.

In recent years, systematic digging into the past of key ministries and institutions has unearthed a troubling and previously hidden degree of “recycling” of Third Reich officials in the post-war decades.

A 2016 government report revealed that in 1957, more than a decade after the war ended, around 77 percent of senior officials at the justice ministry had been members of the Nazi party. That study, also carried out by Safferling, revealed that the number of former Nazis at the ministry did not decline after the fall of the regime but actually grew in the 1950s.

Part of the justification was cynical pragmatism: the new republic needed experienced civil servants to establish the West German justice system. Furthermore, the priorities of the Allies who won the war and “liberated” the country from the Nazis were quickly turned upside down in the Cold War context.

After seeking to de-Nazify West Germany after 1945, the aim quickly shifted to building a capitalist bulwark against the communist threat. That approach often meant turning a blind eye to Germans’ previous involvement in the Third Reich.

In recent years, Germany has embarked on a twilight attempt to provide justice for concentration camp victims, placing several former guards in their 90s on trial for wartime crimes.