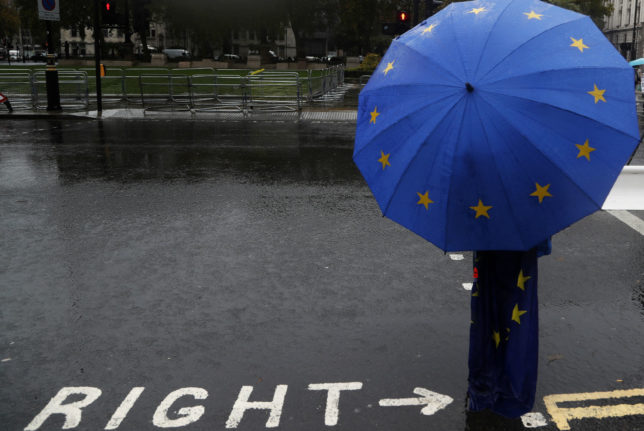 A pro-EU demonstrator in London on October 21st 2020. Things will change drastically for Britons after December 31st. Photo: DPA

From December 31st 2020, at the end of the UK’s Brexit transition period, the immigration status of Brits in Germany will change. For most people this will mean that, if you apply for German citizenship in the future, you will first need to give up your British citizenship.

While this undoubtedly sounds scary, the process is actually quite simple – or at least a lot simpler than making the decision to get citizenship in the first place! So, if you’re thinking about swapping your British passport for a German one, here are five key questions to consider, along with some tips for navigating the complex world of citizenship law.

READ ALSO: How thousands of Brits in Germany will be in limbo after doors close on dual nationality

Will I need to get German citizenship to stay in Germany?

The short answer is no – but there are several benefits to doing so. Under the terms of the Withdrawal Agreement agreed between the UK and the EU, British citizens who move to Germany before December 31st can register for a residence permit which will allow them to live and work here as before.

READ ALSO: Brits in Germany urged to apply for residence status before 2021 deadline Of course, whether you plump for German citizenship over British is an entirely personal decision. Many people are perfectly happy to live in Germany on a residence or permanent residency permit, which allows them to live here unimpeded and retain most of the rights they enjoyed previously.

Be aware though: without German citizenship, you won’t have the right to vote in any elections, whether local, European, regional or national, and you will lose your right to free movement – i.e. the ability to live and work – throughout the EU. You may also lose access to certain jobs that are reserved exclusively for German or EU citizens, unless you have another ‘backup’ EU citizenship like Irish, French or Polish.

There is another side to the story, however. In giving up your UK citizenship you may make returning to Britain much more difficult for you and your family in the future, and could lose other benefits such as access to social security support.

If you’ve weighed up the pros and cons and decided that German citizenship is best for you, then you’re ready to start the process of renouncing your British citizenship.

READ ALSO: Brexit – 'Brits should try for German citizenship even if they think they don't qualify'

How do I go about giving up my British citizenship?

It may be a major life event for you, but as with most modern bureaucracy, your first step to renouncing British citizenship is to fill in an online form. This form – known as “Form RN” – is around six pages long, and simply asks for your personal details, the nationality you are giving up, and the nationality you hope to gain afterwards.

After filling it in, you’ll need to sign it and also find a countersignatory who can confirm that you’re of “sound mind” and that you believe that giving up your British citizenship is in your best interest.

Along with your application, send the Home Office proof of your British citizenship, such as a passport or birth certification, and a letter from your local Citizenship and Naturalisation Office in Germany stating that you will be conditionally entitled to citizenship once you’ve renounced your British one.

READ ALSO: Q&A – What does Brexit mean for my rights as a Brit living in Germany

How can I prove to the German authorities that I’m no longer “British”?

After submitting your RN form on the UK government website, you should receive a ‘declaration of renunciation’ to confirm that your application has been accepted. This is basically a copy of your application that has been signed and stamped. The date at which you lose your British citizenship – six months from the date of application – will also be printed on the form. You can use this declaration as evidence that you’ve successfully asked to give up your old citizenship. Submit the documentation along with your other citizenship documents, which will include copies of your birth certificate, information relating to your residence and work in Germany, confirmation of your German language skills (B1 or higher) and a certificate to say you’ve passed your citizenship test.

The exact documents you need will be dependent on your personal circumstances, and you should always speak to a citizenship advisor at your local Citizenship & Naturalisation Office (or Einbürgerungsbehörde) before you start the process.

A word of warning, though: due to rules in the UK designed to protect citizens from becoming stateless, your application to give up British citizenship will expire within six months. This means that, should you not receive your German passport within that time, your application to renounce your citizenship will be cancelled and you may have to reapply.

READ ALSO: What Brits in Germany should know about travelling after December 31st

Can I get my old citizenship back after I renounce it?

Generally speaking, yes. If you decide to leave Germany to move back to the UK, there’s always the chance of regaining your British citizenship, although this will probably mean swapping one passport for the other again.

At this point, you will probably be familiar with how it all works: just hop online once more and fill in yet another government form: in this case, Form RS-1. This time, the form will be quite a bit longer, and you’ll need to show that you’re of “good character”, which essentially means not having any prior criminal convictions or involvement in extremism or terrorism.

You will also be asked to prove that you are entitled to British citizenship, and that you were required to give it up in order to gain German citizenship. Again, a letter from your local Citizenship & Naturalisation Office will probably suffice.

If you’re still not sure about the best way forward, it may be worth talking to an immigration lawyer about your situation. Choosing a citizenship can have huge implications for social security payments, right of abode and more, so it’s best to learn the full ramifications of your choice before making a final decision.

As a best-case scenario, a lawyer may also be able to inform you further about any relevant exceptions to the dual nationality rule under German immigration law. Who knows? You may even be able to dispense with Form RN altogether.

Is there still a chance for me to get dual nationality before the deadline?

If you’re lucky enough to qualify for citizenship now (which usually means being in the country for at least eight years, or being married to a German for two and resident in the country for three, but there can be exceptions so check with local authorities), you absolutely still have time to apply and qualify for dual nationality.

Regardless of when your application is accepted, the exception on dual nationality will still apply as long as you get your application in by the 31st December this year. If you’re in this position, don’t wait around: get a phone appointment with your local citizenship office and kickstart the process as soon as possible.