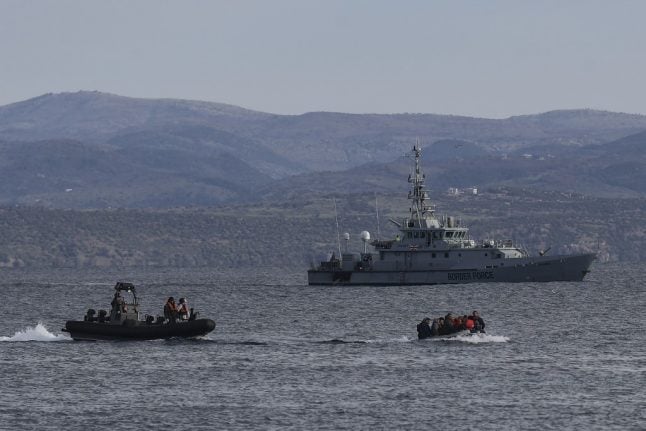 A dinghy with 15 Afghan refugees approaches the Greek island of Lesbos on February 28, 2020 next to UK Border Force patrol boat HMC Valiant (background), a cutter patroling in Agean sea under European

President Emmanuel Macron, who called a summit after deadly recent acts of terror in France and Austria, called for a “rapid and coordinated” response and denounced what he described as the “misuse” of Europe's asylum provisions
by people seeking entry for sinister reasons.

“In all of our countries we are witnessing a misuse of the right to asylum” by traffickers, criminal gangs, or people from countries “which are not at war”, the French leader told journalists after the video conference.

The meeting was called after four people were killed in a shooting rampage by a dual Austrian-Macedonian national in the heart of Vienna last week.

A Chechen radical Islamist with asylum status beheaded a history teacher outside Paris last month, and a Tunisian who came to France on a migrant boat then killed three people at a church in Nice.

The crimes prompted a debate about entry control.

And as European leaders vowed Tuesday to protect the Schengen zone of visa-free travel between member countries, they also talked about strengthening the common zone's borders with the outside.

“You can only can preserve it (Schengen) if we urgently, urgently focus on the external borders,” said Dutch Prime Minister Mark Rutte.

The Netherlands, he said, supported strengthening Frontex — the agency tasked with helping EU countries and the Schengen members manage their external borders.

German Chancellor Angela Merkel, for her part, agreed it was “urgent and crucial for us to know who enters and who leaves” the Schengen area. German police officers, representatives of the EU's border management agency Frontex, on the Greek island of Lesbos, look at a dinghy with migrants crossing the Aegean sea from Turkey, on October 17, 2015.AFP

Meeting host Macron called for better data exchanges between EU countries “because any security gap on the external border or inside member states is a security risk for all the member states.”

Last week, he announced a doubling of the number of French border guards, and called for a “deep” revision in the Schengen area rules.

Kurz said the danger of an attack “is with us permanently”.

“We have among us thousands of foreign terrorist combatants who survived combat in Syria and Iraq for the Islamic State (group) and returned,” he said.

“These are time bombs,” added Kurz. “We need to adopt a more solid approach to the threat weighing on Europe.”

Stressing there was no conflict between Islam and Christianity, Merkel said there was, however, a strong need “for a model of democratic society to combat terrorist and undemocratic behaviour” in Europe.

Key to the battle was a determined fight against “terrorist propaganda and hate speech” online, said Macron.

French teacher Samuel Paty's beheading last month was inspired by a virulent social media campaign against him by parents after he had shown cartoons of the Prophet Mohamed to pupils in a lesson on free speech.

“The internet is a space of freedom, our social networks too, but this freedom exists only if there is security and if it is not the refuge of those who flout our values or seek to indoctrinate with deadly ideologies,” said the French president.

He is pushing for the adoption “in the coming weeks” of EU regulations forcing media and websites to speedily remove “terrorist” propaganda that appears on their platforms.