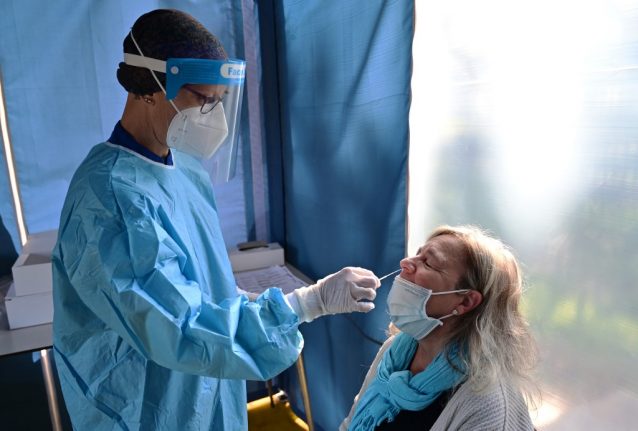 A healthcare worker conducts a nasal swab at a testing centre in northern Italy. Photo: AFP

Italy's government has announced that family doctors will soon carry out testing at surgeries, rather than referring patients by phone to specialist testing centres as is currently the case.

The government hopes that making testing more widely and quickly available could help contain the spread of infections in the country, which reported almost 25,000 new cases in a day on Wednesday.
“General practitioners and pediatricians will help to improve patient care by providing a greater number of first-level diagnostic services and by carrying out rapid antigenic swabs,” said Stefano Bonaccini, president of the Conference of the Regions, on Wednesday.
“Now our country has one more tool to use to counter the spread of Covid-19.”
However, Italy's doctors' unions haven't actually agreed to the testing plan yet as they say it carries significant risk.

While the new rules would oblige every GP in the country to carry out the tests, unions say not all surgeries have the capacity to do them safely.

While the government has set aside 30 million euros for the testing scheme, unions argue that this amount wouldn't fund enough tests to make a real difference to contagion rates, and that participation in the scheme should not be mandatory as it could put family doctors and other patients in danger.

As well as more personal protective equipment and increased sanitation, surgeries would need separate rooms and entrances for patients with Covid-19 symptoms, unions point out. A doctor enters a changing room set aside for putting on and removing PPE equipment at a hospital in Milan. Photo: AFP

National secretary of the Italian doctors union (SMI) Pina Onotri said the plan would “affect the safety of doctors' offices and citizens.”

In a statement to local media, she explained that the union did not agree to the plan because “to give this obligation at this moment to a group of professionals already suffering seemed ungenerous to us.”

“We believe that it is important for family doctors to conduct rapid tests voluntarily.”

“The doctors' offices are cramped and limited, and often located inside residential condominiums where someone could become infected,” he told local media.

“There are many frail and elderly doctors among us and this could represent a serious problem.”

Doctors and other healthcare workers have been at high risk of contracting the coronavirus. A list kept by Italian doctors' unions states that 183 doctors have so far died in Italy after being infected with Covid-19 .

If testing does become available at doctors' surgeries in Italy it may not be for some time yet, as ministers and unions continue discussions.

Until now, the government has only authorized certain healthcare facilities in Italy to carry out swab tests. You can't currently get tested at your local doctor's surgery, nor every private lab, due to protocols intended to keep regional heath authorities immediately informed of every new positive case.

The testing procedure varies according to your reasons for getting a test, and where you are in Italy. Check your local health authority's website for details of the process where you are, and if in doubt, ask a doctor.

READ ALSO: Where to find the latest Covid-19 information for your region of Italy

If you suspect you may have Covid-19, do not go to a doctor or hospital: call your GP, your region's dedicated coronavirus helpline (full list here), or the nationwide 1500 number for assistance.

Monkeypox was identified in a young adult who had recently returned from the Canary Islands, Rome’s Spallanzani Institute for infectious diseases said.

He is being treated in isolation and is in a reasonable condition, it said in a statement carried by Italian news agencies, adding that two other suspected cases were being investigated.

Alessio D’Amato, health commissioner for the Lazio region that includes Rome, confirmed on social media that it was the country’s first case, adding that the situation was being “constantly monitored”.

Cases of monkeypox have also been detected in Spain and Portugal – where more than 40 possible and verified cases have been reported – as well as Britain, Sweden, the United States and Canada.

The illness has infected thousands of people in parts of Central and Western Africa in recent years, but is rare in Europe and North Africa.

Its symptoms are similar but somewhat milder than smallpox’s: fever, headache, muscle aches, back pain, chills, exhaustion, although it also causes the lymph nodes to swell up.

Within one to three days, the patient develops a rash, often beginning on the face then spreading to other parts of the body. Although most monkeypox cases aren’t serious, studies have shown that one in ten people who contract the disease in Africa die from it.

The World Health Organization on Tuesday said it was coordinating with UK and European health officials over the new outbreaks.