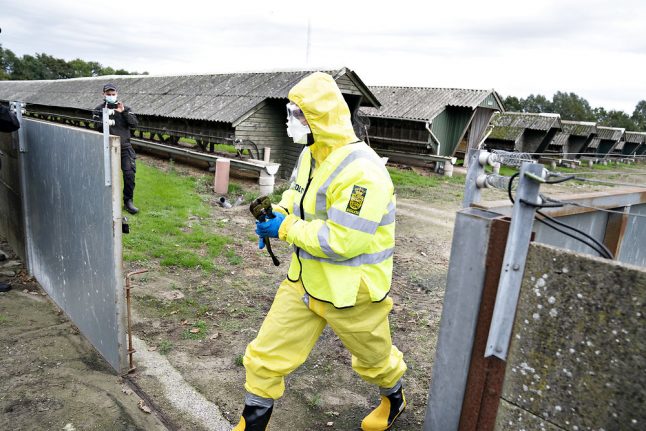 Police at a mink farm in North Jutland on October 9th. Officers entered the farm by force after the owner declined to allow his mink to be culled voluntarily. Photo: Henning Bagger/Ritzau Scanpix

As of Monday this week, coronavirus has been detected at 76 mink farms in the Nordic country, around 7 percent of all Danish mink farms. The first case of Covid-19 in Danish mink was discovered in North Jutland in June.

Subsequently, the government has recommended that all minks be put down at farms where cases are detected as well as within a 7.8-kilometre radius of the farms.

That means as many as 1.5 million minks could be euthanised due to the outbreaks, Danish news wire Ritzau has reported.

Health authorities in the country are seriously concerned about the ability of Covid-19 to be transmitted by minks.

The virus spreads very quickly between farmed mink. Newspaper Information reports that health authorities are concerned about mutations of the virus in minks that could reduce the effectiveness of a future vaccine in humans infected with mink variations of the coronavirus.

Minks are particularly susceptible to coronavirus and conditions on the farms, at which thousands of animals are packed closely in cages, enable rapid transmission and mutations in so-called “reservoirs” of the virus, according to Information’s report.

The Danish Veterinary Consortium, under the auspices of infectious diseases institute SSI and the University of Copenhagen, has warned that two new variants of Covid-19 are “particularly concerning”, Information reports.

The government has stepped up its response to mink infections as the number of affected farms has increased in October.

While all mink on affected farms were culled during the original June outbreak, this response was scaled back before being later being reinstated along with the extension to farms within a 7.8-kilometre radius of outbreaks.

A link between an infected mink farm and infections and deaths due to Covid-19 at a care home in Hjørring had been found prior to this, according to Information’s report.

The animals are normally slaughtered around November for the use of their fur.

Local politicians have called for the central government to only euthanise infected mink, citing the impact of the culling on jobs in the mink farming industry.

“We mayors are in genuine fear for the continued existence of the mink industry,” the letter states according to TV Midtvest.

The mayors argued that the response risks “crushing an industry with many jobs and annual exports of around five billion (kroner)”.

Their requests include minks at farms with the 7.8-kilometre radius be initially tested for Covid-19, rather than culled.