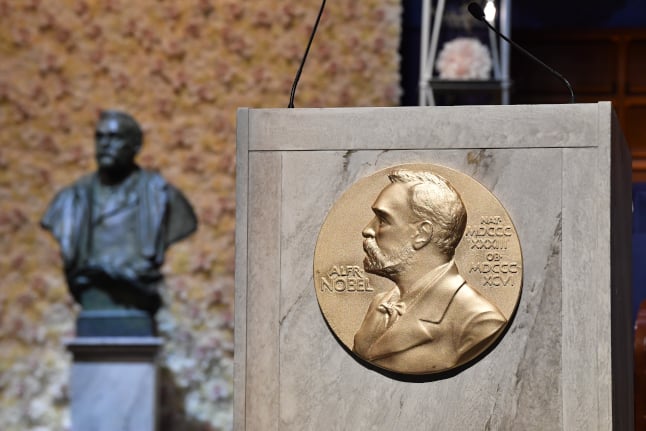 Since 1974, the statutes of the Nobel Foundation stipulate that the award may not be given posthumously. But a person may be awarded the honour if she or he dies between the time of the announcement in October and the formal prize ceremony in December.

Before the change, only two people had won a Nobel posthumously.

One was Dag Hammarskjöld, the Swedish secretary general of the United Nations who died in a plane crash in 1961 but was awarded the Nobel Peace Prize later the same year.

And in 1931, the Nobel Prize in Literature was awarded posthumously to another Swede, Erik Axel Karlfeldt.

In 2011, the medicine prize committee selected Ralph Steinman of Canada, unaware that he had passed away just three days before its announcement.

The foundation decided nevertheless to give him the prize.

From Adolf Hitler to Michael Jackson via Stalin or Mussolini, the Nobel Peace Prize has, in almost 120 years of existence, seen its share of improbable, far-fetched or eyebrow-raising candidates pass through.

Hitler was nominated for the Peace Prize by a Swedish MP in January 1939, on the brink of the bloodiest conflict in history.

The proposal, which was meant as sarcasm and aimed at discrediting the nomination of Britain's Neville Chamberlain after the Munich Agreements, was however withdrawn.

Serbian President Slobodan Milosevic, later tried for genocide, was also proposed, as was Jules Rimet, the “father” of the football World Cup.

But the Norwegian Nobel Institute – the Peace Prize is the only one of the prizes handed out in Norway – welcomes all proposed names, as long as they are sent in by January 31st for the year in question and are submitted by those eligible to nominate, and each year the Nobel Institute receives hundreds of nominations.

Only one in 20 female laureates

While their representation among winners has been steadily increasing since the early years, as of 2019 women still only represented five percent of all laureates.

Between 1901 and 1920, only four women were honoured, which has increased to 24 percent in the last two decades, but still only account for 54 out of the 923 laureates.

The economics prize has only been awarded to two women, but it has only been around since 1969, which can be compared to the physics prize which has only three female laureates since 1901.

Nevertheless, the first person to win the Nobel Prize twice was Marie Curie, in 1903 in physics and in 1911 in chemistry.

Nobel went down in history as the inventor of dynamite, but he was also keen on English poetry and a fan of Shelley and Byron.

He wrote poetry his entire life, sometimes in his native Swedish but mostly in the Bard's language.

In a letter to a friend, he wrote: “I have not the slightest pretension to call my verses poetry; I write now and then for no other purpose than to relieve depression, or to improve my English.”

In 1862, at the age of 29 and questioning his literary talent, he sent a letter to a young woman that said in French: “Physics is my field, not writing.”

The year of his death, 1896, he wrote a scandalous tragedy in four acts entitled “Nemesis”, inspired by Shelley's play “The Cenci” about a woman in 16th-century Rome who murders her incestuous father.

Why is there no Nobel prize for mathematics?

There were longstanding rumours that Alfred Nobel's lover had an affair with mathematician Gosta Mittag-Leffler, but in the 1980s, researchers were able to put those to rest. There's nothing to support the rumour, and everything suggests otherwise.

So why is there no prize? There are two likely explanations.

In 1895, when Nobel wrote his will, a maths prize already existed in Sweden and he saw no need for a second one.

And at the beginning of the 20th century, the applied sciences were in public and scientific favour. The contribution of mathematics to humanity was not as obvious as it is today.

A copy of Andulrazak Gurnah's book on the stands at the Swedish Academy on Thursday. Photo: Jonathan Nackstrand/AFP

Gurnah, who grew up on the island of Zanzibar, but who arrived in England as a refugee at the end of the 1960s, was honoured “for his uncompromising and compassionate penetration of the effects of colonialism and the fate of the refugee in the gulf between cultures and continents.”