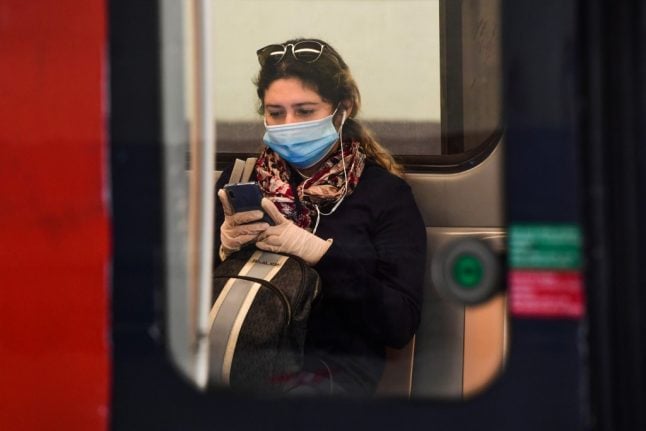 Are you using Italy's contact-tracing app yet? Photo: AFP

More than seven million people in Italy have now downloaded the Immuni app since it was launched in June, as local media reports a spike in downloads last weekend.

With new cases of coronavirus rising again in Italy, the government says more people need to use Immuni if the country is to avoid a second wave of contagion, and the increased restrictions that would come with it.

READ ALSO: What will change in Italy’s October emergency decree?

The Italian government on Monday launched an awareness campaign aimed at encouraging people to use the app, which it says is “a valid contribution to the fight against Covid-19: free and totally anonymous, it helps to break the chain of contagion, alerting the user of risk of contact with positive cases.”

As health authorities have pointed out, the more people download the contact-tracing app, the better it will become at notifying users of whether they may have been in contact with an infected person.

However, many in Italy have so far been resistant to downloading the app, citing concerns about privacy or saying it simply doesn't work properly.

Coverage of the app is higher in some Italian regions than others, with notably fewer downloads in the south overall, according to the app's creators. So what do you need to know before you decide whether to download it? Here's a closer look.

The app works using bluetooth, and communicates with oher devices which also have the app installed.

If two smartphones with the app installed are less than one metre apart, they exchange automatically generated codes which make it possible to trace previous contacts in case one of the users is diagnosed with the virus.

Immuni is free and downloading it is of course voluntary.

The app doesn't require any personal data and does not connect with other apps on your phone.

After installation, the app asks for your location. After that, “the system will function automatically”, according the app's official website.

When local health authorities register a new case of coronavirus, they can add a code into the system, with the consent of the patient.

The system then sends notification to users who have been in close contact with the positive case.

The codes are anonymous and don’t contain personal information about the users, health authorities said.

“It is an innovative, technological support to the initiatives the government has already put into place to limit the spread of the Covid-19 virus,” said a joint statement by the ministries of health and of innovation when the app launched in June.

“It was developed in compliance with Italian and European legislation to protect privacy.”

According to the app's creators, data collected will be stored on the device itself, and not transmitted to a central server.

The system will not trace movements and data can only be shared with the user’s permission. Any data collected and shared with the central server will be deleted by December 31st, 2020.

“Immuni's sole purpose is to help cope with the epidemic. The project is not for profit, and in no case will your data be sold or used for any commercial purpose, including profiling for advertising purposes,” the official website states.

What happens if I get a notification?

An exposure risk notification looks like a little red dot appearing at the top of your screen, which reads: “Risk of exposure detected. Find out what to do”.

Immuni has two suggestions: immediately notify your doctor and in the meantime isolate yourself until you can get tested, or alternatively, ignore the message  – “but we strongly advise you not to do this”, it says.

According to one report from a user who got a positive notification from the app, after notifying their doctor they were tested a few hours later.

“By being alerted early, users can contact their general practitioner and, therefore, lower the risk of serious consequences,” the app's website states.

One complaint users have however is that the app can take a long time to notify them of potential contact with an infected person. In the case described above, they got the notification 15 days later,

How do I use Immuni?

You do not need to be an Italian resident: authorities recommend that you download and use it whenever you're in Italy, whether you live here or are just visiting.

A small gesture, to a great country. ??

‼️ Available in several languages, it helps keep us safe.@immuni_app

The app is currently available in English, Italian, German, French, and Spanish according to the website's FAQ.

“The app uses the same language that’s set on  the user's smartphone, where available,” it says.

The app only works within Italy.

You can find further details, in Italian or English, at immuni.italia.it

Monkeypox was identified in a young adult who had recently returned from the Canary Islands, Rome’s Spallanzani Institute for infectious diseases said.

He is being treated in isolation and is in a reasonable condition, it said in a statement carried by Italian news agencies, adding that two other suspected cases were being investigated.

Alessio D’Amato, health commissioner for the Lazio region that includes Rome, confirmed on social media that it was the country’s first case, adding that the situation was being “constantly monitored”.

Cases of monkeypox have also been detected in Spain and Portugal – where more than 40 possible and verified cases have been reported – as well as Britain, Sweden, the United States and Canada.

The illness has infected thousands of people in parts of Central and Western Africa in recent years, but is rare in Europe and North Africa.

Its symptoms are similar but somewhat milder than smallpox’s: fever, headache, muscle aches, back pain, chills, exhaustion, although it also causes the lymph nodes to swell up.

Within one to three days, the patient develops a rash, often beginning on the face then spreading to other parts of the body. Although most monkeypox cases aren’t serious, studies have shown that one in ten people who contract the disease in Africa die from it.

The World Health Organization on Tuesday said it was coordinating with UK and European health officials over the new outbreaks.