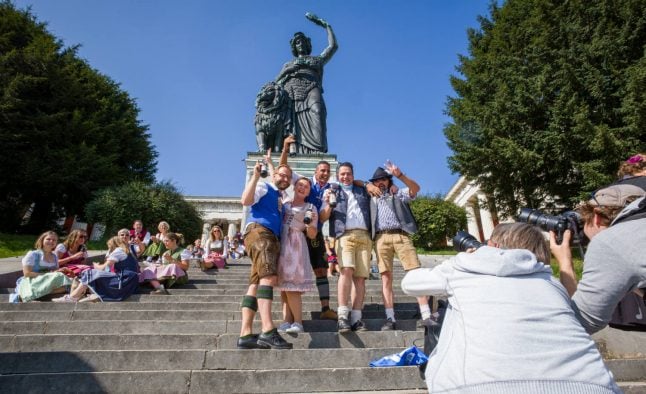 People in traditional costume celebrate on the Oktoberfest grounds in Munich on Saturday. Photo: DPA

In a bid to limit the spread of coronavirus, authorities in the Bavarian capital have decided to make mouth and nose coverings mandatory in certain public places and streets in the city centre.

This was decided at a meeting involving the city's crisis management team, which met on Monday morning. The regulation is to apply from Thursday onwards and will affect areas including Marienplatz and Viktualienmarkt.

In addition, further rules will come into force from Thursday:

State premier Markus Söder of the centre-right Christian Social Union (CSU), said the city's health department would in future be supported by the German armed forces. “We will ask the Bundeswehr to provide 100 people to improve tracking,” he said.

Söder slammed the carelessness of some people. “Munich has very high numbers, too high numbers.” The situation in Munich is considered to be particularly worrying because no single explanation is blamed for the increase. Instead the infections are being logged in different groups across the board.

However, celebrations held to replace Oktoberfest, which was cancelled this year, are in the spotlight.

A total of 50 restaurants opened their doors for the WirtshausWiesn at the weekend when Oktoberfest was due to start. Authorities had feared in advance that people might celebrate a “wild Wiesn” on the Theresienwiese, where the festival usually takes place.

Söder said he had mixed feelings when looking at pictures of replacemen celebrations, particularly at the Viktualienmarkt.

In an interview with radio station B5, Söder brought up the issue of compulsory masks in public places in Munich. “I don't want to take away anyone's joy,” said Söder. However, in view of the high infection rates in Munich, he said they were needed. People enjoying the sunshine in Munich on Saturday, the day Oktoberfest 2020 was meant to start. Photo: DPA

On Saturday morning, at the time of the traditional first beer keg tapping, things remained quiet. A ban on alcohol was aimed at preventing wild partying and reducing the risk of infection rates spiralling out of control.

Mayor Reiter had also asked everyone who wanted to celebrate despite the Oktoberfest being cancelled to observe the coronavirus rules.

Meanwhile, Söder has called for a meeting with other state premiers and Chancellor Angela Merkel to discuss rising rates.

The authorities in several cities in North Rhine-Westphalia also want to discuss whether stricter measures should be introduced again due to rising rates. With 46.9 new infections per 100,000 inhabitants within seven days, Hamm is close to the threshold of 50.

There are concerns in other cities too. On Monday Gelsenkirchen stood at 44.1 cases per 100,000 people in seven days and Remscheid at 37.8. For Cologne, the figure on Monday was 33.2.

There are also rising figures in Berlin. In the popular district of Friedrichshain-Kreuzberg the number of new infections on Monday was logged at 50.8 cases per 100,000 inhabitants, the Tagesspiegel reported.

Berlin health senator Dilek Kalayci said she was concerned because it is becoming increasingly difficult to trace contact chains. The increase in new infections in Berlin is gaining momentum, she said.