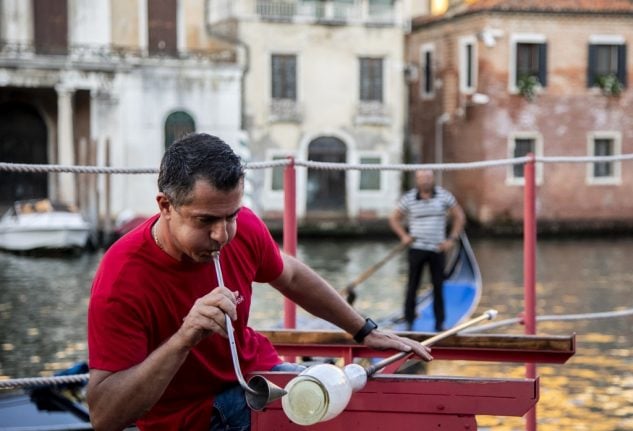 Venetian glass master Matteo Tagliapietra dislays glass blowing techniques on "The Floating Furnace" boat equipped with a kiln. All photos: Tiziana Fabi/AFP
Standing at a glowing furnace on a boat at the foot of the Rialto Bridge on Venice's Grand Canal, Matteo Tagliapietra blows glass in a mesmerising demonstration of centuries-old Murano glassmaking. The world-famous brand may take pride of place in the souvenir shops that pepper the alleyways in the Italian lagoon city – but 70 percent of the glass objects sold are actually fake and not produced in Venice, explains Luciano Gambaro, head of an association that promotes Murano glassware.
So for the fourth consecutive year, authorities have organised “Venice Glass Week”, a series of events to raise awareness of “real” Murano glass, one of Italy's most famous exports. Among the initiatives launched by the glass-making sector is an exhibition near the famed Gallerie dell'Accademia museum, showing off works made by
artists who are under 35.
A history that began in 1291 when La Serenissima, as the Venetian sovereign state was then known, ordered all glass-makers working in the old town to move
to the island of Murano on the lagoon, as they had caused too many fires in the centre. Coinciding with the Venice film festival, glass week is a way to “shine the spotlight on what Murano represents,” says Gambaro, as he shows off his family
enterprise on the island.
At the heart of his treasure trove lies the furnace room where Tagliapietra, his associate, reigns king.
Sporting black shorts and white socks, Tagliapietra uses his blow pipe to shape a vase with meticulous movements. “The methods have been the same for centuries. At the time of La Serenissima, glass-makers were superstars,” he says with a smile as he models
his artwork.
To fight against counterfeits, many of which are imported from Asia, the region of Veneto created the registered trademark of “Vetro Artistico Murano”
in 1994.
It certifies that products sporting the logo with an identification code are made on the island. But the dramatic fall in tourists caused by flooding last November and then the coronavirus pandemic has hit local trade badly.
“Our sector is undoubtedly suffering, especially those who live exclusively off the local market, they're in a bad situation,” says Gambaro. “But the international market is starting to get going again.”
READ ALSO: Venice struggles to recover from floods and lockdown, despite film festivities
Far from the imported glassware that fetches a couple of euros, some Murano glassware can cost tens of thousands.
“Our works are present everywhere from Versailles to Saint Petersburg via Madrid,” Gambaro says with pride.
“Our history spans more than eight centuries and has never stopped, even if we have already experienced crises.”