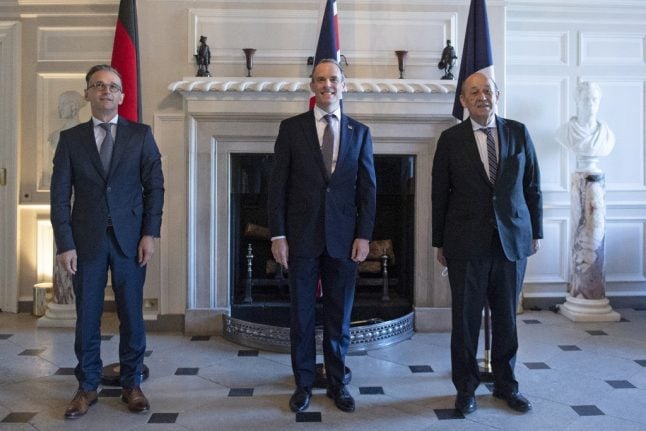 The bill's potential implications for Northern Ireland — which is meant to enjoy a special status after Brexit — also prompted a threatening reminder from powerful US Democrat Nancy Pelosi for London to uphold the troubled territory's peace process.

Serving MPs and elders of Johnson's Conservatives, including former prime minister John Major and ex-party leader Michael Howard, issued their own sharply worded reminders that the rule of law is sacrosanct.

“How can we reproach Russia or China or Iran when their conduct falls below internationally accepted standards, when we are showing such scant regard for our treaty obligations?” Howard told the House of Lords.

At the meeting in London, Sefcovic told senior British minister Michael Gove that unless the measures are withdrawn “by the end of the month”, Brussels will consider taking legal action.

The European Commission warned that Britain “has seriously damaged trust between the EU and the UK”, and scorned Downing Street's contention that the bill will preserve the peace in Northern Ireland.

“In fact,” the statement said, Brussels “is of the view that it does the opposite”. The bill would give British ministers unilateral powers to regulate trade among England, Scotland, Wales and Northern Ireland, once the force of EU law expires after a post-Brexit transition period at the end of this year.

But under the EU withdrawal treaty, Britain is meant to liaise with Brussels on arrangements for Northern Ireland, which will have the UK's only land border with the EU, and where 30 years of bloodshed ended with a historic peace deal in 1998.

France told Britain it was “unacceptable” to violate the EU treaty, and the pound slumped further on currency markets with businesses growing ever-more alarmed that the coronavirus-hit UK economy could fall off a Brexit cliff-edge at the end of this year.

Irish premier Micheal Martin, who spoke by phone with Johnson on Wednesday evening, said such an outcome would be “gross irresponsibility” on top of the economic havoc inflicted by Covid-19.

EU officials — and Johnson's opponents at home including in the UK's devolved governments — have ridiculed Downing Street's argument that the treaty was written “at pace” and contained unforeseen problems relating to a protocol on Northern Ireland.

But Johnson's spokesman stressed the legislation was needed to create a “safety net” for Northern Ireland's post-Brexit trading regime.

“We can't allow the peace process or the UK internal market to inadvertently be comprised by the ill-intended consequences of the protocol,” the spokesman told reporters.

“We would expect other countries to recognise this and the exceptional circumstances we find ourselves in.”

And the British government published a legal position to spell out its belief that notwithstanding any binding promises to the EU, “parliament is sovereign as a matter of domestic law and can pass legislation which is in
breach of the UK's treaty obligations”.

Sefcovic and Gove met on the last day of a parallel track of negotiations this week in London that have struggled to make headway on a future trading relationship after the transition period expires.

Johnson's critics say the new bill is aimed partly at torpedoing that track, so Britain can go its own way and forge other trade pacts free of EU interference, not least with the United States.

However, House of Representatives Speaker Pelosi gave short shrift to any hopes of Congress ratifying a future trade deal if Britain ploughs ahead with the new Brexit bill.

“If the UK violates that international treaty and Brexit undermines the Good Friday accord, there will be absolutely no chance of a US-UK trade agreement passing the Congress,” she warned.

“The Good Friday Agreement is treasured by the American people and will be proudly defended in the United States Congress.”