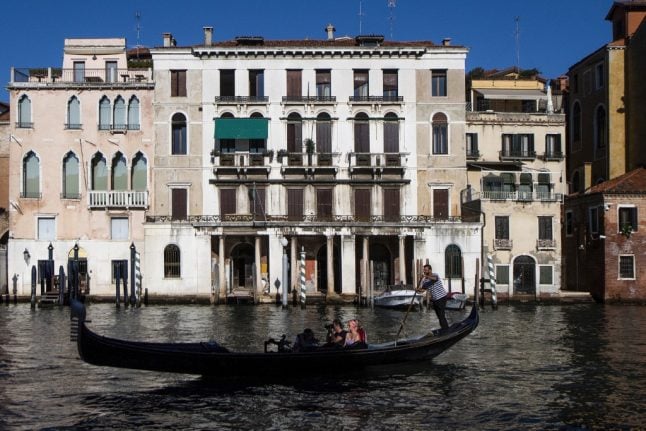 A gondola on the quiet canals in Venice on September 8th, 2020. Photo: Tiziana Fabi/AFP
It's been a bad year for Venice.
In November, the highest tides in over 50 years left the famous Italian lagoon city drenched and devastated.
Fast forward to February when the surrounding region, Veneto, suffered Italy's – and Europe's – first death from coronavirus at the start of the epidemic, which went on to kill over 35,000 people in the country.
With visitor numbers already plummeting after the floods, the tourism-dependant city then suffered an even bigger loss of income due to lockdown travel restrictions.
This month, the opening of the prestigious Venice film festival on September 2nd was widely trumpeted as a sign of hope and renewal for the beloved yet beleaguered city.
But one week into the world-renowned “Mostra del Cinema” on the beachfront Lido, a twenty-minute boat ride from central Venice, many Venetian residents say that, for them, there is still little to celebrate.
READ ALSO: 'No autographs, please': Venice prepares for virus-safe film festival Stars wear masks at this year's Venice Film Festival. Photo: AFP
“Nothing has changed much,” said Francesca, a tour operator manning a stand on the Venice waterfront, who declined to give her last name.
For those locals accustomed to the estimated 30 million tourists who visit each year, whose presence makes it a challenge to cross the Rialto Bridge or snap a photo of the Bridge of Sighs, the city feels empty, she said.
Visibly missing are visitors from the United States and China, among other countries, who are still prohibited from travelling to the country.
“All my family works in tourism. It makes me sad on one hand, but it's beautiful,” she said, referring to the fewer tourists.
READ ALSO: Photo: Tiziana Fabi/AFP
Although visitors now outnumber pigeons and seagulls in Saint Mark's Square, and hotels are at 40 to 50 percent capacity according to the mayor, the city is still a long way from being back to normal.
About a third of shops lining Saint Mark's Square were closed on Tuesday, as a few hundred tourists meandered around, enjoying the sunny weather.
Venetians also point out that those who attend the festival don't necessarily move outside their film industry bubble on the Lido.
“People come but it's not like people come to buy fish,” said Andrea Dei Rossi, a seller inside the Mercato di Rialto, whose fish market has been in operation since the 11th century.
“It's been a hard year for all of us,” Dei Rossi said. “The fact that we're open is wonderful.”
Dei Rossi's business is down 80 percent this year, he said, due primarily to the closure of many of the city's restaurants. Photo: Tiziana Fabi/AFP
'A matter of image'
The festival, now in its 77th year, is a scaled-down version of its former self this September amid ongoing travel restrictions preventing many stars, filmmakers and industry executives from attending.
But restaurants, bars and other businesses on the Lido are enjoying at least a temporary boost with the arrival of the film crowd.
One waitress, Betelehem Pilastro, described the festival as a yearly “adventure” that “gives so much work to so many people.”
READ ALSO: 'Without tourists, Venice is a dead city': Not all Venetians are glad the crowds have gone
Others are more sceptical, like water taxi driver Walter, who asked his last name not be used.
“There are hardly any films, just some Italian productions. It's a political festival that had to happen no matter what, even without content, to
show that Venice is alive,” he said.
“I consider this festival just a matter of image.”
Rent is due
La Serenissima, as the floating city of Venice is sometimes called, is home to a mere 50,000 residents who lament the city's depopulation, the
worsening annual flooding, and the mass tourism threatening their environmentally fragile city.
The infamous “acqua alta,” or periodic high water, hit 187cm (6 feet 13 inches) in November, the highest level since 1966.
The city declared a state of emergency as shops, homes and over 50 churches were inundated with water, causing millions of euros' worth of damages and striking a blow to tourism.
READ ALSO: 'The myth of Venice': How the Venetian brand helps the city survive A flooded Venice hotel during the Acqua Alta in November 2019. Photo: AFP
Just as the city was digging itself out, coronavirus struck.
Shopkeeper Lumine Vanda said Venetians are aware they're not alone in dealing with the difficult economic repercussions from coronavirus.
Still, the insecurity felt today by locals was worse than anything experienced in her lifetime, said the 75-year-old.
In March, Vanda's landlords cut by half the 5000 euro ($5900) monthly rent she pays for her artisanal shoe and handbag shop on the Rialto Bridge. But that discount will run out at the end of the year.
“In January they'll ask for five months rent,” said Vanda. “How will we do that?”
By AFP's Alexandria Sage