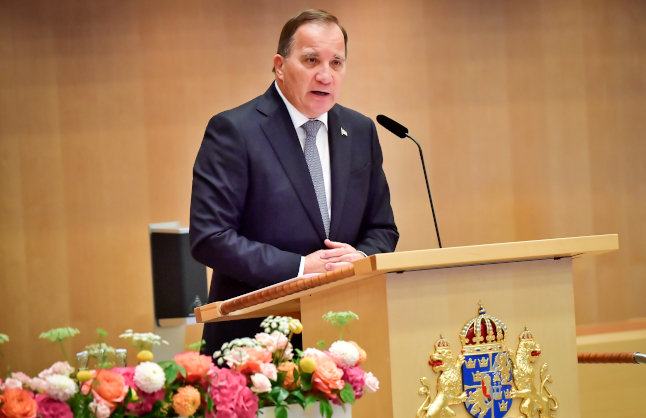 Löfven spoke at an unusual opening session of the Riksdag, with only half of his cabinet ministers and 190 of Sweden's 349 members of parliament present due to coronavirus health and safety measures, as well as King Carl XVI Gustaf, Queen Silvia, and a limited number of guests.

The prime minister's speech is meant to set out the broad themes of the government's policy for the year ahead, and unsurprisingly much of it touched on the pandemic.

In his speech, the Social Democrat leader said Sweden and its welfare state was “a country to be proud of”, but he also addressed some of the flaws laid bare by the coronavirus, which fatally swept though many Swedish elderly care homes at an alarmingly fast rate earlier this year.

“The Sweden that was hit by Covid-19 was not perfect, with deficiencies in care for older people, ongoing climate change that impacts our children's future, and cracks in the welfare system that is meant to guarantee people's security,” said Löfven, pledging to invest more in those areas.

“That's why we will not go back to how Sweden was before the crisis. We will build back even better.” A slimmed-down version of the Swedish parliament met on Tuesday. Photo: Jonas Ekströmer/TT

Löfven also spoke of foreign policy, reiterating the Swedish government's support for “the Belarusian people's quest for democracy” as well as for “Ukraine's sovereignty and territorial integrity” and “the 'One Country, Two Systems' principle to preserve Hong Kong's autonomy”.

Violent crime has been a hot topic in Sweden in recent years, and Löfven spoke of reinforcing the police and tougher punishments aimed at cracking down on organised crime. “When gangs spread fear and violence, those affected are often hard-working people living in vulnerable areas,” he said.

“But to succeed, it is vital that we stop recruitment into crime. No teenager should ever see a life of crime as their future. The engagement of all members of society is essential to achieve this.” The prime minister also mentioned Sweden's parliamentary inquiry into overhauling current migration law. The inquiry is set to present its final report, after which negotiations to tighten laws will get under way.

You can read the full English translation of the speech here.