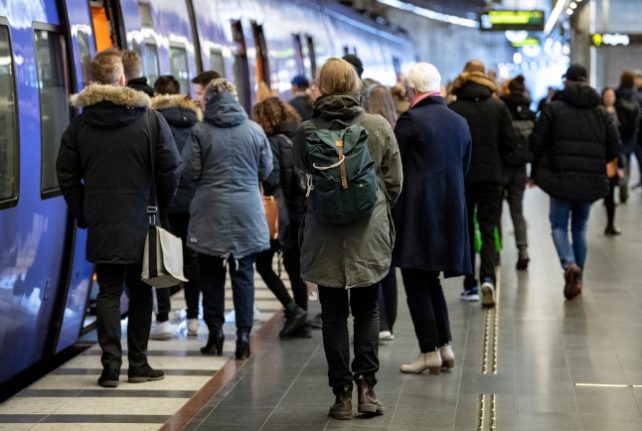 People getting on a train in Malmö in March this year. Photo: Johan Nilsson/TT

“What we're expecting and what we think is going to happen – considering the signals from the Public Health Agency that the infection has slowed, that fewer are in hospital and that deaths have gone down – is that people start to relax somewhat. We think it's going to increase the pressure on public transport,” said Claes Keisu, press officer for Stockholm public transport operator SL.

The company said it had had no reports of significant overcrowding. Sweden tends to almost shut down over the summer holidays, but even compared to last year travel is almost 40 percent down.

“Certain departures at certain times could get more than 50 percent occupancy and sometimes more. It is very hard to control, we don't have seat booking and people don't get in touch with us beforehand to tell us when they are going to travel,” Keisu told Swedish news agency TT.

Gothenburg public transport operator Västtrafik, who has seen a 35 percent decrease in travel this summer, also expects passenger numbers to start going up again next week.

“Every year during the first weeks when schools and work start again there is always a little bit of crowding, it takes a few weeks before travel patterns settle. This year we are doing everything we can to decrease the risk of that,” Mette Ramquist, press manager for Västtrafik, told TT.

In southern Sweden, home to busy commuter hubs such as Malmö, Helsingborg and the university town of Lund, transport operator Skånetrafiken thinks there will be plenty of space for everyone.

“We have lost a lot of travellers. We're at roughly 55-60 percent today compared to what we had before. We're counting on southern Swedes to have plenty of space next week despite schools starting,” Mattias Hennius, press manager for Skånetrafiken, told TT.

The Public Health Agency still recommends everyone to continue working from home if they can throughout autumn, which Hennius said was an important factor. But he added that there is always a risk during rush hour that some departures are busy, so it was no guarantee against overcrowding.

“But that travel would return to pre-corona levels (next week) – no, we don't think so.”

Several measures are being planned to stem the tide of commuters, including more departures as well as schools continuing to run some of their education online and adapting students' schedules.

But public transport operators also argued that each passenger needs to travel responsibly.

“We reiterate our call on travellers to help us by not travelling unless they have to, that if they have to try to avoid rush hour,” said Keisu.

“If you are able to walk or cycle instead, that's a great way to free up space for those who really need public transport,” added Ramquist.

But it is unclear what difference they will make in practice.

“We have been following the directions from expert authorities the whole time. When the guidelines come we'll see what they say. But we listen to the Public Health Agency as it is today, and in our case infectious disease doctors in the Skåne region,” said Hennius.