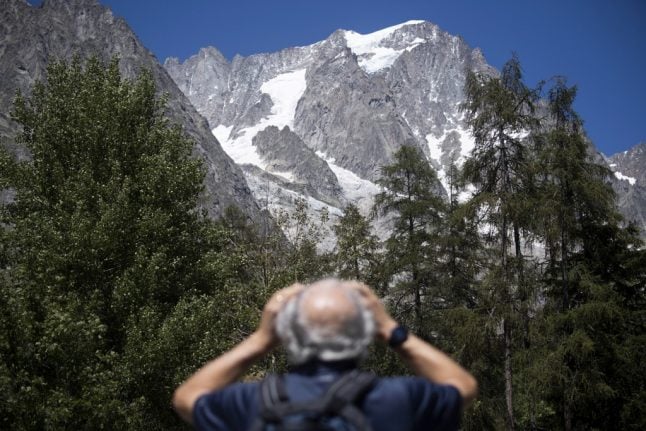 Fears that a block of ice from the Planpincieux glacier could fall prompted evacuations near Courmayeur. Photo: Marco Bertorello/AFP

The hovering block of ice from the Planpincieux glacier within the Mont Blanc massif is estimated at about 500,000 cubic metres, said Valerio Segor, director of the natural risk management service for the Aosta Valley region.

That is the equivalent size of Milan's cathedral, or “a soccer field with 80 metres of ice on it,” he said at a press conference in the northwestern Italian town of Courmayeur, near the French border.

“Any fall would be capable of considerable damage and also travel a long way,” he said, equivalent to an avalanche.

Experts say a recent rise in temperature means that the massive chunk of ice could break off and slide down the mountain, threatening homes to the east of the picturesque town and ski resort. The evacuation of 75 people, including 15 residents, began on Thursday after an alert from the mayor the night before. Roads leading to the Val Ferret valley below, a favourite spot for hikers, were closed.

“The evacuation was urgent and imperative,” mayor Stefano Miserocchi told reporters. “The situation foresees a high alert in the next 72 hours.”

The precarious chunk of ice is located about 2,600 to 2,800 metres above sea level and slowly detaching, Segor said.

“With our monitoring systems and photographic comparisons we have identified a sector of the glacier that is giving way, at a not exaggerated speed,” he said, adding that the “anomalous behaviour” of that section of ice was visible from flights over the glacier.

The thermal shock of high temperatures, which then turned cold before rising again “fragilises that part of the glacier with the risk of immediate collapse”, he said.

“The water flowing underneath can, in fact, act as a 'slide'. It is the most dangerous situation and one most predisposed to collapse.”

Time-lapse video footage of the glacier from July handed out by the Montagna Sicura foundation in Courmayeur shows the glacier slowly but visibly moving down the side of the mountain. Authorities are able to track the movement of the area's glaciers through photo and radar monitoring.

Last autumn, another section of ice from the Planpincieux glacier threatened to collapse, prompting road closures.

Mont Blanc is the highest mountain in the Alps at over 4,800 metres.