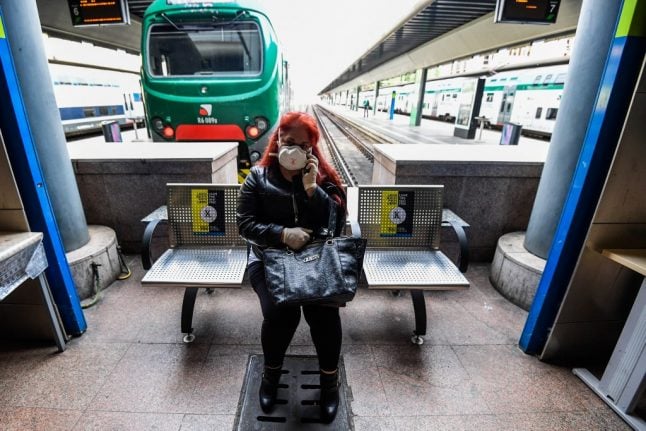 While the Ministry of Transport indicated it would relax the rules requiring trains to keep 50 percent of all seats empty, the Health Ministry insisted that social distancing of at least a metre was mandatory – catching rail operators by surprise at the start of Italy's peak holiday season.

“It's only right that the safety rules applied so far remain in place on trains,” Health Minister Roberto Speranza announced on Saturday afternoon, August 1st.

“For this reason I signed an ordinance reiterating that in all enclosed public spaces, including public transport, both social distancing and wearing face masks is and remains obligatory.”

READ ALSO: What you should know if you're visiting Italy this summer

The announcement set train companies scrambling to comply, with high-speed train company Italo saying it had cancelled eight trains on Sunday morning and told other ticket holders they wouldn't be able to travel that afternoon.

In total some 8,000 passengers had their journeys disrupted, the company said, adding that customers would receive a full refund for unused tickets.

State-owned rail company Trenitalia said it was contacting passengers individually to invite them to change their reservation or accept a refund.

Both companies said they expected to be able to mitigate the disruption in the coming days, a period when millions of people in Italy would typically set off on their August holidays. While many are unable to travel this summer, others have swapped trips overseas for vacations within Italy, keeping trains, roads and ferries busy.

Tickets for high-speed Frecciarossa trains from Milan to southern Italy are already almost sold out for the coming weekend, reports said on Monday. The confusion over whether companies could sell more than 50 percent of tickets arose after an emergency decree mandating social distancing and other precautions expired on July 31st, without an official replacement. The government is expected to extend safety rules in a new decree this week.

Earlier guidelines from the Ministry of Transport, issued in July, said passengers that would be allowed to sit near each other if they declared that they lived in the same household.

“The government never authorised 100 percent capacity,” the ministry said in a statement on Saturday, calling the decision to maintain social distancing for all passengers “prudent”. It said it had reviewed its guidelines with health experts and instead opted to avoid “needless risks”.

Yet some regions of Italy, notably Lombardy, Piedmont, Liguria and Friuli Venezia Giulia in the north, have threatened to issue their own ordinances allowing regional trains to run fully occupied.

READ ALSO: What rules will you need to follow if you're visiting Italy this summer?

Anyone taking a train in Italy this summer can expect to find themselves seated 'a scacchiera' (chessboard-style), i.e. with empty seats to their side and in front.

You'll also have to follow a designated one-way route through the carriage, leading to separate entrances and exits, and must wear a face mark throughout your journey.

People taking long-distance services will also have their temperature checked before boarding and may have to sign a form declaring themselves healthy. While social distancing remains compulsory on trains and other public transport in Italy, people taking an aeroplane will find themselves sitting elbow to elbow with other passengers.

In line with EU-wide guidance, airlines are allowed to fill planes to 100 percent capacity on the grounds that their air filters continually draw in and circulate outside air.

Passengers must wear face masks – replacing them with fresh ones every four hours – and place jackets and other small items in sterilised containers.

They are once more allowed to bring hand luggage aboard, after the Italian government scrapped a temporary ban on the use of overhead lockers.