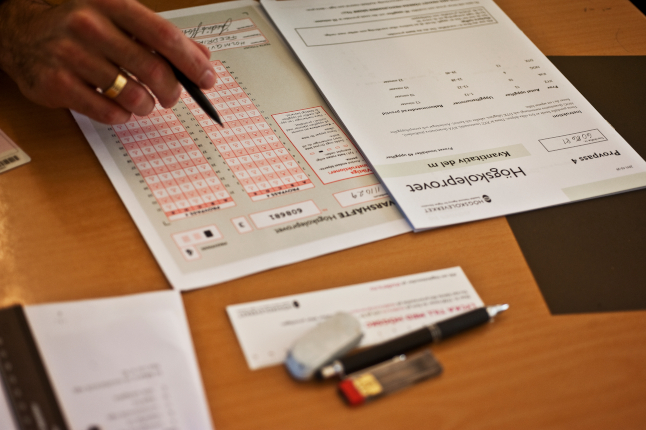 Will the Swedish Scholastic Aptitude Test go ahead this autumn? Photo: Yvonne Åsell/SvD/TT

International employees who are posted in Sweden will be entitled to receive the same labour conditions and salary as workers who are permanently based in Sweden. This bill was adopted in line with the EU's Posting of Workers Directive and came into force on July 30th. It states that an employee may also be entitled to having their expenses paid for travel, food and accommodation while in Sweden. Will Sweden's university exam go ahead?

Sweden's Scholastic Aptitude Test (högskoleprovet), which is one of several routes to getting into university, was cancelled last spring due to the coronavirus. The Swedish Council for Higher Education is now set to review whether or not the autumn exam could go ahead in a safe way.

The test is currently scheduled for October 18th, but the council is to present its report on whether or not it can go ahead – and, if so, how could be held in line with health and safety recommendations – on August 6th. Around 70,000 students had signed up for the spring edition of the test. Sweden lifted its advice against non-essential travel to four more countries as of July 30th, including Nordic neighbours Denmark and Norway, as well as Switzerland and the Czech Republic. The advice was earlier this summer lifted for Andorra, Belgium, France, Germany, Greece, Hungary, Iceland, Italy, Croatia, Monaco, Luxembourg, Poland, Portugal, San Marino, Spain and the Vatican.

The guidence, which is issued by the Swedish foreign ministry and not health authorities, has been in place since an early stage in the pandemic, due to global uncertainty and travel bans, so it relates to restrictions for travellers rather than being based on the spread of infection in the countries.

It's important to remember that individual countries may also have their own rules about entry from Sweden, and that these may change quickly. Denmark and Norway for example both only allow entry for tourism purposes from certain Swedish regions based on the local infection rate. Remaining travel warnings to be reviewed later in August

The guidelines may be extended, but they are relatively unlikely to be lifted ahead of August 12th, because Sweden has previously announced that as the date when it will next announce news on the warning.

The foreign ministry's advice against non-essential travel is not a legally binding ban, but has other implications, for example that your travel insurance may be invalid if you disregard it.

There may be several other upcoming changes as the coronavirus situation develops. We will always do our best to report the latest news that affect international residents in Sweden on The Local.