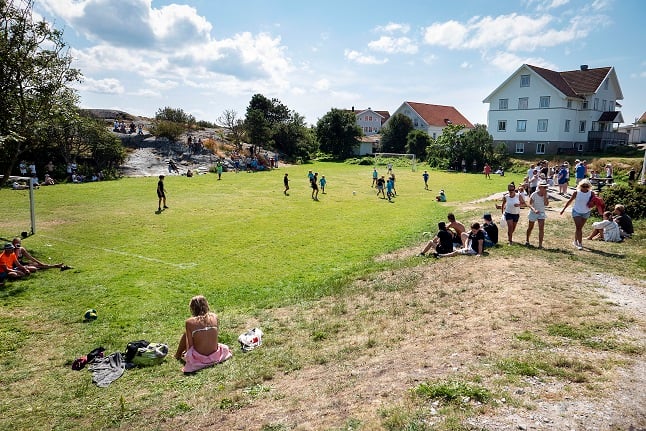 People gather at a football pitch on an island in Bohuslän in late July. Photo: Mats Schagerström / TT

The region gives a report to the government each week on the situation in each of its municipalities, and in Wednesday's report the region said: “Swedes are apparently starting to tire slightly of following coronavirus rules.”

Sweden's response to the coronavirus has relied mostly on voluntary measures, except for a few law changes such as national bans on visits to care homes and public events for over 50 people.

The voluntary recommendations include staying at home while sick, reducing social circles and meeting few people, keeping distance from others in public and maintaining good hand hygiene.

“It's in the middle of the holiday season so it wasn't unexpected. We understand that people want to be outside when the weather is nice. But you still have to have respect and keep following the recommendations,” said regional head of crisis management Lena Malm.

Around half of the municipalities in the region reported some problems of crowding. The previous week, this was the case in popular West Coast tourist destinations such as Tanum and Smögen, and this week concerns about overcrowding also extended to municipalities around the Lake Vänern area, including Lidköping and Mariestad.

There were increasing reports of crowding in pubs and restaurants, and Malm said that one problem was individuals following the recommendations to a lesser extent under the influence of alcohol.

She said she believed the general shift in behaviour was due to the fall in infection rate across Sweden, which may have led some people to think they can relax on following the restrictions, despite authorities repeatedly urging not to do this yet.

“That's the signal everyone is getting, that we have got through [the pandemic] quite well. The worry is that we don't know when the next wave will come and how it will look,” said Malm.

to tire of — att tröttna på

wave (both referring to water, and figuratively eg 'wave of infection') — (en) våg