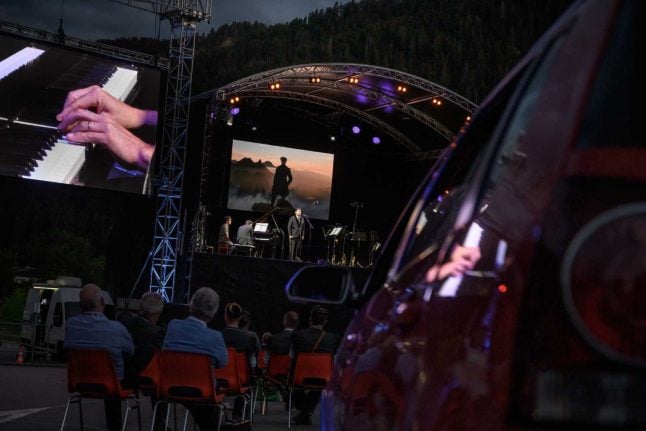 The Festival du Lied, which for nearly two decades has brought symphonies and concertos to the region, hit on the drive-in format as a way to allow concertgoers to attend safely during the coronavirus pandemic.

On Sunday, the second day of the week-long festival, dozens of cars filled a large lot in the idyllic village of Charmey in western Switzerland with the Alps providing a dramatic backdrop. With their windows rolled down, some occupants closed their eyes while others were brought to tears by renowned tenor Ilker Arcayurek's moving rendition of Schubert's Fruhlingsglaube.

“This is an extraordinary concept,” retiree Willy Boder said through his car window. Considered at risk of complications if he contracted COVID-19, he had remained stuck inside for months, Boder told AFP.

“Here, I had the opportunity to come and see a concert without risking going into a concert hall,” he said. “It is really very well done.” “A lot of people, myself included, have really missed live music,” she said.

“It is such a treat being here.”

Cars could have no more than four occupants, who must stay in the vehicles, while up to another 100 people could opt for seats, spaced far apart, to enjoy the concerts in the open air.

The festival, created in 2001 by mezzo-soprano Marie-Claude Chappuis, was reimagined to fit the new COVID-19 reality. “It is very important to continue making music, but also to continue being careful,” Chappuis told AFP, adding that the organisers had striven for a balance between the two.

“The emotions derived from music and art in general are something we have all been missing greatly during this period.” Audiences will also be treated to traditional chants in a local dialect, as well as jazz classics by the likes of Ella Fitzgerald and Nina Simone.

The cars are parked in a lot used in winter for skiers waiting to be taken up the mountain towering above. A large outdoor stage is supplemented by a giant screen to ensure that performances are visible to all. Chappuis acknowledged that it was “not ideal” to listen to music in a parking lot, noting that both listeners and musicians prefer the superior acoustics of concert halls.

That, she said, was why organisers decided to move the festival from its regular venue in the town of Fribourg to the Alpine heights.

“It was important to find a beautiful place for the drive-in,” she said, insisting the beauty of classical music required a setting that was more than “asphalt and cars”. While spectators listened to the music through open car windows on the balmy Sunday evening, organisers have also made contingency plans in the case of rain: the concerts are retransmitted on an FM frequency picked up by the car radios.

Arcayurek, a Turkish-Austrian national dubbed the “golden tenor”, told AFP he was thrilled to be doing a live concert for the first time since March.

But he acknowledged it was different performing in front of a car-filled lot. “In a closed venue, you have the possibility to look the people in the eyes, and you don't have that here,” he said.

“But still it was really enjoyable.”