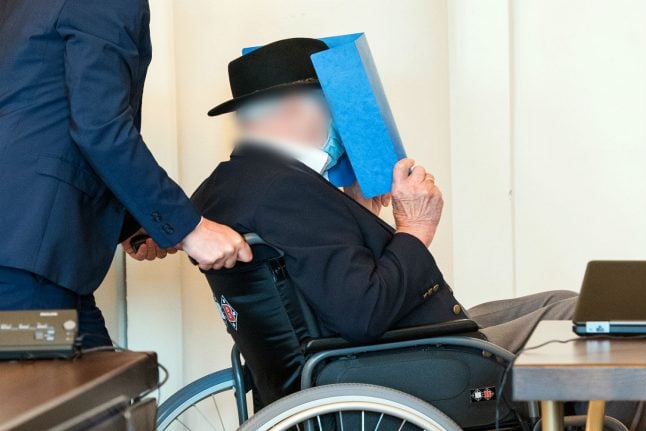 In what could be one of the last such cases of surviving Nazi guards, Bruno
Dey was convicted for his role in the killing of 5,230 people when he was a
teenaged SS tower guard at the Stutthof camp near what was then Danzig, now Gdansk, in Poland.

Bruno Dey was convicted for his role in the murder of 5,232 people when he
was a teenaged SS tower guard at the Stutthof camp near what was then Danzig,
now Gdansk, in Poland.

Judge Anne Meier-Göring said Dey had helped to “dehumanise human beings and turn them into numbers”.

READ ALSO: German concentration camp guard 'sorry for what he did'

“You still see yourself as a mere observer, when in fact you were an accomplice to this manmade hell,” she told him as she handed down the sentence, also for one case of attempted murder.

In his last statements to the court, Dey had apologised to victims but stressed that he had been forced into his role at the camp.

“Today I would like to apologise to those who went through the hell of this
madness, as well as to their relatives. Something like this must never happen
again,” he said from the dock.

He said he was “shaken” by witness accounts from Stutthof, where tens of
thousands of people died from illness, malnutrition and murder by gas chamber
and surprise execution.

But he added that he became aware of the “extent of the atrocities” only upon hearing witness testimonies and reports.

Chief prosecutor Lars Mahnke had demanded a three-year prison sentence for
Dey, saying he knew about the “state-organised mass murder” happening around
him and should have climbed down from the tower and handed in his weapon.

Dey's defence lawyer Stefan Waterkamp had sought an acquittal or a
suspended sentence. Dey was given a juvenile sentence because he was 17 or 18 years old when he
served at the camp between April 1944 and April 1945.

Waterkamp, his lawyer, had argued that such a young man could hardly have
been expected to break ranks, and that the teenaged Dey “saw no escape”.

He added that as a tower guard, Dey would not have known the extent of the
“sadism” and “inhumane conditions” of the camp.

Dey acknowledged last year that he had been aware of the camp's gas
chambers and admitted seeing “emaciated figures, people who had suffered”, but
insisted he was not guilty even if he expressed regret over the atrocities.

“I'm speechless. I don't want his apology, I don't need it,” Marek
Dunin-Wasowicz, a 93-year-old camp survivor, told AFP via telephone from his
home in Warsaw.

The Nazis set up the Stutthof camp in 1939, initially using it to detain Polish political prisoners.

But it ended up holding 110,000 detainees, including many Jews.

Dey, who now lives in Hamburg, became a baker after the war.

Married with two daughters, he supplemented his income by working as a truck driver, before later taking a job in building maintenance.

He came into prosecutors' sights after a landmark 2011 ruling against
former Sobibor camp guard John Demjanjuk on the basis that he was part of the
Nazi killing machine.

Since then, Germany has been racing to use that legal precedent against surviving SS personnel rather than trying to find evidence that they directly
committed murders or atrocities.

Courts have since convicted Oskar Gröning, an accountant at Auschwitz, and

Reinhold Hanning, a former SS guard at the same camp, for complicity in mass
murder.

Both men were found guilty at the age of 94 but died before they could be
imprisoned.

In the 600-page collection of findings entitled “State Security in the Cold War”, historian Friedrich Kiessling and legal scholar Christoph Safferling focused on the period from the early 1950s until 1974.

Their research found that between 1953 and 1959, around three in four top officials at the federal prosecutor’s office, which commissioned the report, had belonged to the Nazi party.

More than 80 percent had worked in Adolf Hitler’s justice apparatus, and it would take until 1972 before they were no longer in the majority.

“On the face of it they were highly competent lawyers… but that came against the backdrop of the death sentences and race laws in which they were involved,” said Margaretha Sudhof, state secretary at the justice ministry, unveiling the report.

“These are disturbing contradictions to which our country has long remained blind.”

It was not until 1992, two years after Germany’s national reunification, that the last prosecutor with a fascist background left the office.

“There was no break, let alone a conscious break, with the Nazi past” at the federal prosecutor’s office, the authors concluded, stressing “the great and long continuity” of the functions held and “the high number” of officials involved in Hitler’s regime.

Chief federal prosecutor Peter Frank commissioned the study in 2017. The federal prosecutor’s office is one of Germany’s most powerful institutions, handling the most serious national security cases including those involving terrorism and espionage.

With more than 100 prosecutors, it is “the central actor in the fight against terror,” the report authors said, underlining its growing role in the decades since the September 11th, 2001 attacks in the United States.

The researchers were given unfettered access to hundreds of files labelled classified after the war, and found that rooting out alleged communists was often prioritised over other threats, including from the far right.

“In the 1950s the federal prosecutor’s office had a combat mission – not a legal but a political one: to pursue all the communists in the country,” the daily Süddeutsche Zeitung said in a summary of the report.

The fact that West Germany widely used former officials from the Nazi regime in its post-war administration had long been known.

For example, Hans Globke served as chief of staff and a trusted confidant to former conservative West German chancellor Konrad Adenauer between 1953 and 1963 and was responsible for recruitment to top posts.

However, Globke had also been a senior civil servant in the Nazi-era interior ministry and was involved in the drafting of the 1935 Nuremberg race laws that imposed the first dramatic restrictions on Jews.

In recent years, systematic digging into the past of key ministries and institutions has unearthed a troubling and previously hidden degree of “recycling” of Third Reich officials in the post-war decades.

A 2016 government report revealed that in 1957, more than a decade after the war ended, around 77 percent of senior officials at the justice ministry had been members of the Nazi party. That study, also carried out by Safferling, revealed that the number of former Nazis at the ministry did not decline after the fall of the regime but actually grew in the 1950s.

Part of the justification was cynical pragmatism: the new republic needed experienced civil servants to establish the West German justice system. Furthermore, the priorities of the Allies who won the war and “liberated” the country from the Nazis were quickly turned upside down in the Cold War context.

After seeking to de-Nazify West Germany after 1945, the aim quickly shifted to building a capitalist bulwark against the communist threat. That approach often meant turning a blind eye to Germans’ previous involvement in the Third Reich.

In recent years, Germany has embarked on a twilight attempt to provide justice for concentration camp victims, placing several former guards in their 90s on trial for wartime crimes.