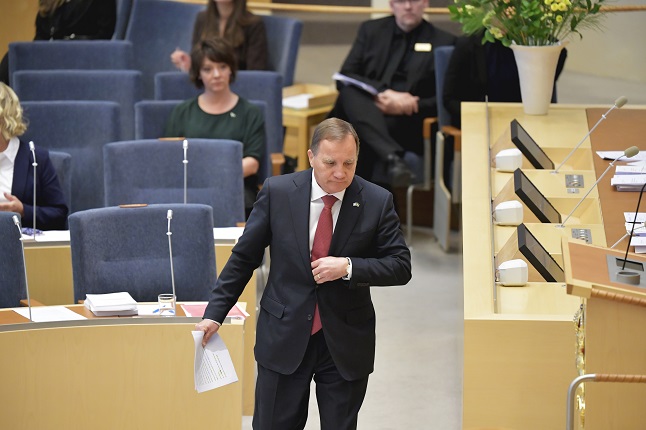 The one thing all parties in parliament seem to agree on here is that Swedish migration law needs a complete overhaul.

Currently, a temporary law is in place, which was introduced back in 2016 after Sweden received record numbers of migrants, refugees and asylum seekers during the crisis of the autumn before.

And people (not just those who arrived as asylum seekers, but also Swedish citizens and residents) bringing their partners or other family members to live in Sweden had to meet certain requirements around income levels and household size.

So this is an important piece of legislation which will affect many people who want or need to move to Sweden in future, as well as people currently resident.

Sweden set up a Migration Committee in late 2019, which was given the task of coming up with a new migration policy. This was agreed in the so-called January Agreement, a cross-bloc collaboration between the Social Democrat-Green coalition government and two of Sweden's opposition parties – the Liberals and the Centre Party.

Over the past two weeks, talks have been going on between five parties, the ruling centre-left Social Democrats and four opposition parties (the Moderate, Christian Democrat, Centre and Liberal parties, all right-of-centre). Notably the Social Democrats' junior coalition partner, the Green Party, has not been involved.

On Monday, the parties reported that these talks had collapsed.

Why did the talks break down?

The sticking point was discussion of a volymmål (volume goal), a proposed cap on the number of asylum seekers who can enter Sweden each year.

The Green Party, excluded from the negotiations, last week said it could not stand behind a policy with this kind of limit. Social Democrat leader and Prime Minister Stefan Löfven said in a statement: “We regret that it's not possible to reach a broad agreement […] We Social Democrats have been prepared to take responsibility and compromise. The Liberal and Centre parties have also contributed constructively and tried to find solutions. The Moderates have, the entire time, raised further questions, set more conditions and not wanted to compromise.”

The Centre Party's acting leader also said it was the Moderates who refused to budge, while the Christian Democrat's leader said the Social Democrats said no to proposed compromises.

What is the next step?

The Migration Committee is due to meet on Tuesday, July 7th, and Löfven said that negotiations would continue within the framework of the committee rather than between individual parties.

The committee, made up of representatives from all eight parliamentary parties as well as experts and secretaries, is supposed to deliver its full report by August 15th. The idea behind it is that any proposals they come up with should have broad support in parliament and therefore would be passed.

What does it mean for Swedish politics?

It's yet another example of how the political landscape has changed since the last election. The Centre and Liberal parties appear to be siding more with their January deal partners, the Social Democrat and Green parties, than with their fellow opposition parties.

The Centre, Liberal, Moderate and Christian Democrat parties were formerly part of a centre-right opposition bloc called 'Alliansen' (The Alliance), but the close result in the 2018 election and ensuing months of intense party talks redrew the landscape.

There’s an old Swedish Word of the Day in The Local’s archives: valfläsk (literally “election pork”, or pork barrel politics).

This week, there’s been enough of it to feed a Swedish town large enough for both a Biltema and a Dressmann store and still have half the pig left!

You could say it started the week before last, when the Social Democrats’ Immigration Minister Anders Ygeman floated a test balloon loaded with a 50-percent cap on non-Nordic residents in troubled neighbourhoods (it went down among the other parties like it was made out of lead).

Then last week, the Liberals threw their hat in the ring by proposing mandatory language assessments for two-year-olds who don’t attend preschool, and then make preschool mandatory for the toddlers whose Swedish isn’t deemed good enough. This, they said, was meant to help integration in areas where bilingual children don’t speak Swedish at home.

“Studies show that early preschool benefits children whose mothers are low-educated and whose parents are born abroad,” their manifesto read.

Liberal leader Johan Pehrson’s statement that in the most extreme cases – where parents clearly refuse to let their children learn Swedish – led to a social media storm that conjured up images of crying toddlers being taken into care for failing to distinguish between en and ett when quizzed.

For any parents of multilingual children (who know better than most how language works in early childhood – I’m raising a multilingual baby myself, but I’ve only just started so if you have any tips, do let me know!), I should stress that the proposal is less extreme than how it was first presented.

This is typical for valfläsk, by the way. Take something that’s perfectly obvious and hard to argue against (of course mixed neighbourhoods and children being encouraged to learn languages are generally good things) but dial it up a notch, insert something immigration-related, promise to get tough on whatever it is you want to get tough on, and propose either something that already exists or would be near-impossible to implement.

Then the Stockholm branch of the conservative Moderates proposed that entire school classes in vulnerable areas should be screened for ADHD through optional rapid tests, in order to increase the comparably lower rate of medication among foreign-born children and prevent them from falling into a life of crime.

“Detached from reality,” said their Social Democrat rival and pointed out that the partly Moderate-run region was planning to cut the number of psychiatric care clinics for young people.

The Christian Democrats, never ones to be outdone, wanted to chemically castrate sex offenders, give police access to healthcare biobanks, and let police take DNA samples from people stopped in internal border checks.

But while many of the election pledges that get tossed around this close to the election (less than a month to go, now!) tend to range from the radical to the ridiculous and are unlikely to ever be implemented, they’re still worth paying attention to. They give us an indication of the direction the parties want to take, and could well reappear in a more watered-down format later on during the governmental cycle.

They may also become part of post-election negotiations, where even small parties hold key cards as the larger parties fight to cobble together viable government coalitions.

They also say something about Sweden and the direction of the political sphere as a whole, where the parties are currently racing to outdo each other on who can be toughest on immigration and law and order.

The Local’s reporter Becky Waterton has gone through all the parties’ election pledges to see how they specifically would affect foreign residents in Sweden – in case you’ve missed her article, click here to read it.

Also in the world of Swedish politics, a new poll by SVT and Novus has the Moderates and the Sweden Democrats neck and neck, Moderate leader Ulf Kristersson promised lower taxes in his summer speech and Prime Minister Magdalena Andersson tougher sentences on gang criminals in hers, and Sweden Democrat leader Jimmie Åkesson suggested changing the name of the Swedish Prison and Probation Service (Kriminalvården) to the Penal Office (Straffverket).

Sweden Elects is a new weekly column by Editor Emma Löfgren looking at the big talking points and issues in the Swedish election race. Members of The Local Sweden can sign up to receive the column plus several extra features as a newsletter in their email inbox each week. Just click on this “newsletters” option or visit the menu bar.