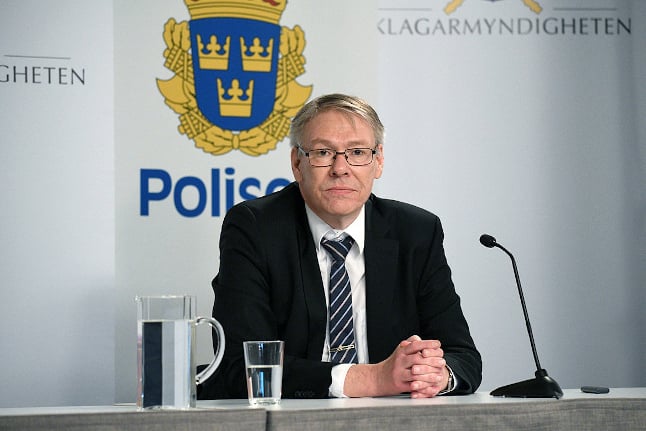 Petersson and police lead investigator Hans Melander made history on Wednesday after they named the man suspected of shooting Palme in 1986 as Stig Engström, an advertising consultant who worked for insurance company Skandia. However, because the suspect died in 2000, he cannot face trial in court, and Petersson therefore also formally closed the country's biggest ever murder investigation.

The decision won both praise and criticism, with many saying that the case they presented appeared to be thoroughly investigated and convincing, but also noting that the suspicions were based only on circumstantial evidence. Rumours that a murder weapon or DNA evidence would be presented turned out to be false.

The Local attended the online press conference on Wednesday and caught up with Petersson for an interview on Thursday – almost exactly 24 hours after the announcement. Read the full interview below.

How are you feeling today after the long day yesterday?

How does it feel to be the one who closed the Palme investigation? This is after all a historic decision.

Yes, it is, but as I've said my job is to conduct a preliminary investigation and I judge that since we have come as far as we can go, and also have a person who we can suspect of crime, I saw no other way forward than closing the investigation.

When you look at everything that you presented yesterday, and what you said about how when you looked at witness statements from the scene there was one person who stood out, on the face of it it seems obvious that this was a person who should at least have been looked at more closely.

We can probably all agree that crucial mistakes were made in the early days of the investigation, but in all the 34 years that have gone by since, why do you think this has not been picked up?

You could put it like this: I have been thinking a lot about that, because it is not like I think I am God's own image of intelligence, that it would only be me, or only we, who would discover something like that.

The conclusion I reached is, as Hans Melander presented yesterday, that when you have 10,000 people to question and you think you have reached the end of the road with one person, and you file him as ad acta as we say, that you close the matter, it is then a pretty big step to start looking in that archive again when there are 9,999 people you have yet to question. I think the failure of the investigative measures is an unfortunate circumstance, and then he ended up in the filing cabinet instead of being actively investigated.

When you started investigating Stig Engström as a potential suspect, did you find a possible motive? We didn't get to hear that much about that at the press conference yesterday.

No, and that is for obvious reasons. It would have been a different story had there been court proceedings, but in my job, which is to assess probable cause or a degree of suspicion, I did not want to speculate too much on his motivation to carry out an act like this. It is something that would have emerged in interrogations.

We have been able to note some things, such as his alcohol abuse or financial problems, that could point in that direction or form a basis for why he would carry out this act – but I dare not say to what extent those things or something else contributed.

Do you think he had planned it or acted on a whim?

I think, and I think the investigation supports my assumption, is that it is a so-called lone madman who gets an opportunity. He is able to do it because he is armed, and his mood is such that something clicks and he fires the gun. My assessment is that it is not planned in advance, but he acts out of impulse.

He has actually described this himself quite well. There was one interview in particular that he gave to the newspaper Skydd och Säkerhet in 1992 where he almost spoke from the perspective of a perpetrator.

He imagined in the interview how the perpetrator had tried to make contact with Palme and was rebuffed, and that that then triggered something and this person shot him. That is not a completely unreasonable scenario, but it is nothing we have been able to prove. Stig Engström was questioned as a witness in the early days of the murder probe, but never as a suspect. Photo: SVT

I think a lot of people had probably been hoping for more, some kind of forensic evidence that settled it. When you started talking to Swedish media earlier this year to say you were reaching a possible conclusion, is this what you had in mind or had you too been hoping for something more concrete?

We had other things. In spring we got clear word from the National Forensic Centre (NFC) that no matter how many weapons we were to bring them, they probably would not be able to pick out the exact weapon used, and that was of course a setback. Other forensic evidence such as DNA has also been collected that we wanted to compare with other things, not just a weapon, but that did not lead anywhere.

You mentioned that NFC had said they wouldn't be able to pick out the weapon. More than 700 weapons have been tested since the murder; how come nobody knew this until now?

Well… it is fair to say I had high hopes in 2018 when we seized a weapon from an acquaintance of Engström, which we sent to NFC and we visited them, and they could neither say yes nor no, that is nothing supported it and nothing spoke against it.

I then started asking 'what's the best we can hope for', and then NFC looked into that a bit more. It became increasingly clear, and in spring 2020 I got definitive word from NFC that we would probably not be able to link a weapon to the bullets. That obviously settled it for me.

Does that mean that you believe that the weapon you seized is in fact the murder weapon, and that if you can't tie it to the bullets it is not worth continuing to look for the weapon?

The problem is that I might believe a lot of things, but I also have to prove them, and I can only say that this was one of those cases where NFC could neither say yes nor no.

We had pretty high hopes because of the fact that this belonged to the person who has been called 'the weapon collector' in the media and they knew each other, so there was, I thought, a reasonable chance that we could get a hit. But unfortunately it didn't give us anything, not enough for us in any case. People reading the news that the Swedish prime minister had been murdered in 1986. Photo: Lars Strömberg/TT

You mentioned at the press conference that you had not found anything that suggested a wider conspiracy behind the murder, but you also said that you had not been able to rule it out completely. Could you tell me a bit more about how you investigated links to a potential organisation?

There were a lot of strange people in society at the time, and a lot of groups and organisations fuelled by some kind of hatred for Palme or at least extreme opinions on various issues, and much of the investigation has focused on that. We have tried to see if there are any links between Engström and some of these organisations. We have spent quite a lot of time mapping them and finding out who their members were and whether they had a connection to Engström, but we have not managed to find such a connection.

That said, the fact that we can't find anything does not mean that there was no conspiracy. Perhaps it was small with only a few people. We haven't found anything either when it comes to the actual execution of the crime itself, or any kind of documentation that suggest a conspiracy, but I cannot completely dismiss it.

All of these doors that are still left slightly ajar…

… should you not keep the investigation going until you have managed to close those doors?

Yes, that is the question. How long can you keep the investigation going? Would it affect the decision to prosecute anyone if you did? Yes, perhaps, if we were able to bring someone else to justice, but we haven't found anyone else.

It has been 34 years. If there's a conspiracy, at least in my experience someone will talk sooner or later, but during all of these 34 years things have been, if not completely quiet, then at least quiet in regards to any information that would move the investigation forward. Many tips have been debated and talked about in the media, but I do not think it is feasible to keep the investigation running to try to further push open such a door.