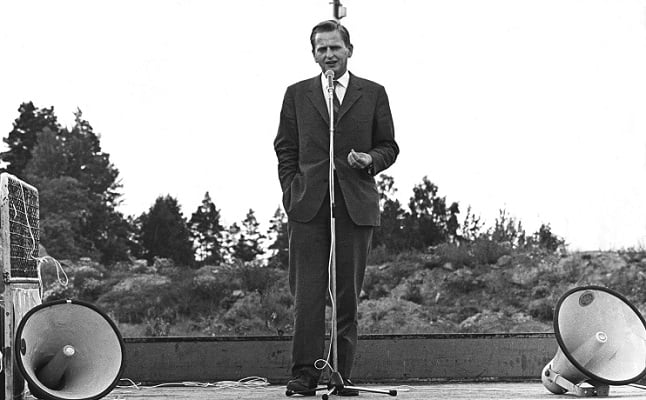 Olof Palme was 59 when he died. Even if he had not been assassinated it's likely he would have remained a household name in Sweden, known as the 'father of Swedish politics'. He served as Prime Minister twice and was known for speaking out against violence in other countries and inequality at home in Sweden, introducing free childcare and increasing tax rates.

The murder occurred as Palme and his wife Lisbeth were walking home from a cinema trip, having just said goodnight to their son and his partner.

The cinema plans were made last-minute, so the Palmes had already sent their bodyguard home for the night – they tried to live as normal a life as possible and often went out without security. At 11.21pm on February 28th, 1986, the couple were shot at short range with a revolver. Palme died immediately but his wife survived with minor injuries. Both bullets were found shortly after, but the murder weapon has never been identified.

1: Person convicted of the murder

A petty criminal, Christer Petterson, remains the only person ever convicted of Palme's murder. He was handed a life sentence in July 1989 after Palme's widow identified him in a widely-criticised line-up.  But he was acquitted later that year by a court of appeal, and died in 2004. By strange coincidence, Petterson has almost the same name as the current chief prosecutor, Krister Petersson.

It is unlikely anyone else will ever be convicted. The prosecutor in June 2020 announced that the investigation would be closed and that police believed they knew who was responsible, but that suspect is dead, meaning they cannot be cleared or convicted.

134: Confessions to the crime

As with many high profile investigations, the Palme murder has attracted multiple confessions. Police say that 134 people have admitted killing the prime minister. Of these, 29 confessed directly to police while the remaining 105 confessed to someone else, who then reported it to police.

250: Shelves for the case files

It's one of the world's biggest ever murder investigations. In fact, in 2010 Sweden removed its statute of limitations partly so that work on it could continue. That means 250 shelves are filled with files, 11 of them dedicated to audio and video recordings. The entire investigation has only recently been digitised.

5: People actively working on the investigation in 2020

The so-called Palmegrupp (Palme group) is a team of police officers and a prosecutor who work on the case. Chief Prosecutor Krister Petersson was the lead investigator from 2017 to 2020, when the investigation was formally closed.

3-4: Tips that come into police each week

This is an average figure, and police say they usually get more tips around the anniversary of the murder each year, and when it's back in the news. Police have said that most of these tips are “low quality”.

600 million: The estimated cost, in kronor, of the investigation

This is just the cost for the police, not including prosecutors, the cost of the two trials against Petterson, or other authorities. The figure is an estimation from Sveriges Radio, but what we do know for sure is that since 2011 alone the police investigation has cost 41 million kronor, mostly spent on staff.