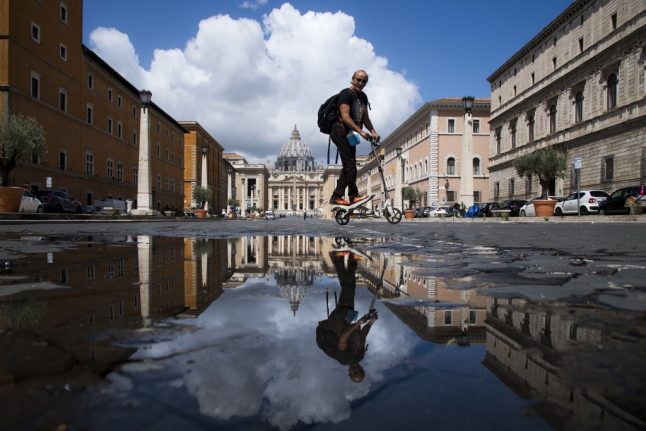 Italian media reports a “boom” in the use of electric scooters, or monopattini, in Italian cities as people avoid public transport and a government scheme pledged to cover 60 percent of the cost of buying a new bike or scooter. Users of Rome's scooter-sharing schemes clocked up 20,000 kilometres in one week at the beginning of June, it said, while online price comparison website trovaprezzi.it reported a sharp rise in the number of people searching for electric bikes and scooters.

Il Sore 24 Ore explains that the increase in the use of scooters and bikes, as well as other forms of personal transport including segways and hoverboards, is tied to the “thousands of citizens who have to travel a few kilometres to work, and also many young people, who prefer to avoid using public transport and choose the new means available.”

But the “electric scooter fever”, it explains, was mainly triggered by the announcement of a government scheme which allows residents of large towns or cities to claim back 60 percent of the purchase price of an electric bike or scooter, up to a maximum of 500 euros.

While a switch to bikes and scooters has already been seen in other parts of Europe, Italy has so far remained stubbornly reliant on cars as the main mode of transportation, including in large cities.

Until 31 December 2020 (or until the fund of 120 million euros runs out), the scheme is open to residents of cities and towns with more than 50,000 inhabitants.

It covers bikes, e-bikes and electric scooters, as well as segways, hoverboards, and subscriptions to transport sharing services (though not car sharing).

READ ALSO: Italy offers city dwellers up to €500 to buy a new bike or scooter

The scheme is part of a sweeping 'Relaunch Decree' signed in may that also promises to extend cycle lanes and introduce new stop lines at traffic lights to allow cyclists to wait in front of motorists.

Milan has already announced plans to transform roads in its city centre, pledging to make some 35 kilometres more accessible to cyclists and pedestrians by adding bike lanes, widening pavements and lowering speed limits.

Rome too has said it will speed up plans to extend its bike paths, starting with an extra 25 kilometres of routes in residential areas outside the centre.

But overall Italian cities remain far behind many other towns in Europe for bike-friendliness, with Rome especially suffering from limited cycle lanes, heavy traffic and poorly maintained roads.

How easy is it to claim the bonus?

The payment will be available for vehicles bought between May 4th and December 31st 2020, and can only be claimed once.

At the moment, the bonus is to be paid in the form of a reimbursement after purchase – so if you've just bought a new bike or are planning to imminently, make sure you keep hold of your receipt. In future the payment is expected to also be made available in the form of a discount upon purchase.

The government has said those hoping to claim will need to use an app, which is still being developed by the Environment Ministry. Users will need to register and claim the refund or discount via the app, and shop owners taking part in the scheme will also need to use it in order to claim the bonus and grant the customer a discount.

Those requesting a refund can do so within 60 days of the online platform becoming operational (though this date is as yet unknown), attaching a copy of the invoice.

Not all bike and scooter shops are currently taking part in the scheme. Where are scooter sharing services available?

If you'd rather take advantage of a sharing scheme, they are now popping up around the country.

There are four main companies offering electric scooter sharing in Rome, Milan, and a growing number of other Italian cities: Bird, Lime and Helbiz, which are American companies, and the Amsterdam-based Dott.

What are the rules on using electric scooters?

The rules were clarified earlier this year after the Italian government classified electric scooters in the same category as bicycles, meaning they don't need to be registered or insured.
There are however some specific rules that apply when riding scooters:
You can find more information (in italian) on the Interior Ministry website here.