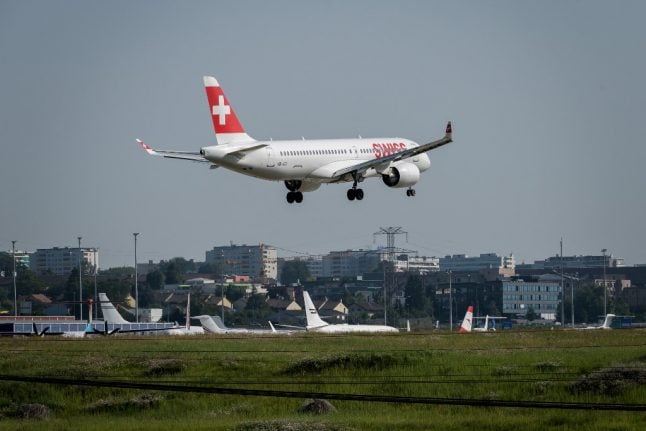 Airlines will soon take off from Swiss airports. Photo by Fabrice Coffrini / AFP

While Zurich and Geneva international airports have not yet seen the traffic — in terms of the number of flights and passengers — as it was before Covid-19, both are getting busier.

Some flights have already resumed their operations, while others are scheduled to take off later this month and in coming weeks, after Switzerland opens its borders with France and Germany on June 15th.

European destinations that are already serviced from Zurich by SWISS airline include Amsterdam, Stockholm, Athens, Lisbon, London Heathrow, Berlin, and Porto. There is also one long-haul flight from Zurich to New York-Newark.

From Geneva, the European flights go to Athens, London Heathrow, Lisbon, and Porto.

All of Swiss’ destinations from Zurich and Geneva in the coming weeks are listed here.

Swiss’ sister airline, Edelweiss, will also resume a number of flights from its Zurich hub.

EasyJet too will resume some of its operations from Geneva on June 15th, with flights to Barcelona, Lisbon, Nice and Porto.

However, airlines are saying that flying in the post-coronavirus era will be a whole new ballgame.

Strict hygiene measures will start already at the airport.

They may include temperature checks and possible ban on most hand luggage.

Inside the plane, waiting in front of the toilet on board may no longer be allowed.

Especially on short-haul flights, drinks and snacks will no longer be served, and duty-free sales on board may also be banned.

What about social distancing?

There has been much talk about airlines eliminating the middle seats, but neither SWISS nor Edelweiss have not committed to taking this drastic step in their Economy cabins, which would cause ticket prices to skyrocket. This applies to EasyJet as well.

However, SWISS is recommending that passengers wear masks on board until at least August 31st, and also use them at the airport before or after flights, “whenever sufficient social distancing cannot be adequately observed”.

As a reminder, the Federal Office of Public Health said that passengers seated in the same row as an infected person, or in the next two rows, are at risk of contamination, regardless of the duration of the flight.

But people who merely travelled on the same plane as a contaminated person, but were seated more than two rows in front of or behind, and had no other contact with that person, are in principle safe from infection.